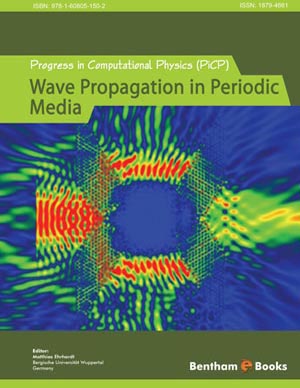 The dynamics of a single electron is considered on a periodic square lattice constructed of rhomboidal quantum wells interacting via narrow links. The spectral structure of bands and gaps of the lattice is derived from an accurate analysis of Bloch waves, based on DN- maps of the quantum wells. For periodic lattice with rhomboidal periods, a solvable model, is constructed based on a rational approximation of DN- maps of the quantum wells by establishing a communication between them via partial boundary conditions emulating the covalent bonds. In the case of the corresponding double periodic lattice, the weak interaction of the two parallel periodic quasi-2d sub-lattices defines, due to the 2d Landau- Zener effect, a high mobility of the corresponding charge carriers in certain direction on the quasi-momenta plane.

This chapter concerns the interaction between guided electromagnetic or acoustic modes of a penetrable periodic planar waveguide and plane waves originating from sources exterior to the waveguide. The interaction causes resonant enhancement of fields in the waveguide and anomalous transmission of energy across it. A guided mode is an eigenfunction of a member of the family of operators in the Floquet-Bloch decomposition of the periodic differential operator underlying the waveguide structure. The theory of existence or nonexistence of modes in ideal lossless waveguides is founded on variational principles. The mechanism for resonant scattering behavior is the dissolution of an embedded eigenvalue into the continuous spectrum, which corresponds to the destruction of a guided mode of a waveguide, upon perturbation of the wavevector or the material properties or geometry of the structure. Analytic perturbation of functions that unify the guided modes and the extended scattering states gives rise to asymptotic formulas for transmission anomalies.

The propagation of electromagnetic waves in dielectric slab waveguides with periodic corrugations is described by the spectrum of the Helmholtz operator on an infinite strip with quasiperiodic boundary conditions. This chapter reviews the basic properties of this spectrum, which typically consists of guided modes, radiation modes and leaky modes. A great deal of attention will be devoted to planar waveguides which share some of the important features of the periodic case. To compute the eigenmodes and the associated propagation constants numerically, one usually truncates the domain that contains the grating and imposes certain radiation conditions on the artificial boundary. An alternative to this approach is to decompose the infinite strip into a rectangle, which contains the grating, and two semi-infinite domains. The guided and leaky modes can be computed by matching the Dirichlet-to-Neumann operator on the interfaces of these three domains. The discretized eigenvalue problem is nonlinear because of the appearance of the propagation constant in the artificial boundary condition. We will discuss how such problems can be solved by numerical continuation. In this approach, one starts with an approximating planar waveguide and then follows the solutions by a continuous transition to the multilayer periodic structure. The chapter is concluded with a brief description of how the perfectly matched layer can be used to compute the guided modes of a waveguide.

The aim of this paper is to explain some recent numerical methods for solving high-frequency scattering problems. Most particularly, we focus on the multiple scattering problem where rays are multiply bounced by a collection of separate objects. We review recent developments for three main families of approaches: Fourier series based methods, Partial Differential Equations approaches and Integral Equations based techniques. Furthermore, for each of these three families of methods, we present original procedures for solving the high-frequency multiple scattering problem. Computational examples are given, in particular for finite periodic structures calculations. Difficulties for solving such problems are explained, showing that many serious simulation problems are still open.

We present in this chapter a review of some recent research work about a new approach to the numerical simulation of time harmonic wave propagation in infinite periodic media including a local perturbation. The main difficulty lies in the reduction of the effective numerical computations to a bounded region enclosing the perturbation. Our objective is to extend the approach by Dirichlet-to-Neumann (DtN) operators, well known in the case of homogeneous media (as non local transparent boundary conditions). The new difficulty is that this DtN operator can no longer be determined explicitly and has to be computed numerically. We consider successively the case of a periodic waveguide and the more complicated case of the whole space. We show that the DtN operator can be characterized through the solution of local PDE cell problems, the use of the Floquet-Bloch transform and the solution of operator-valued quadratic or linear equations. In our text, we shall outline the main ideas without going into the rigorous mathematical details. The non standard aspects of this procedure will be emphasized and numerical results demonstrating the efficiency of the method will be presented.

Periodic media problems widely exist in many modern application areas like semiconductor nanostructures (e.g. quantum dots and nanocrystals), semi-conductor superlattices, photonic crystals (PC) structures, meta materials or Bragg gratings of surface plasmon polariton (SPP) waveguides, etc. Often these application problems are modeled by partial differential equations with periodic coefficients and/or periodic geometries. In order to numerically solve these periodic structure problems efficiently one usually confines the spatial domain to a bounded computational domain (i.e. in a neighborhood of the region of physical interest). Hereby, the usual strategy is to introduce so-called artificial boundaries and impose suitable boundary conditions. For wave-like equations, the ideal boundary conditions should not only lead to well-posed problems, but also mimic the perfect absorption of waves traveling out of the computational domain through the artificial boundaries. In the first part of this chapter we present a novel analytical impedance expression for general second order ODE problems with periodic coefficients. This new expression for the kernel of the Dirichlet-to-Neumann mapping of the artificial boundary conditions is then used for computing the bound states of the Schrödinger operator with periodic potentials at infinity. Other potential applications are associated with the exact artificial boundary conditions for some time-dependent problems with periodic structures. As an example, a two-dimensional hyperbolic equation modeling the TM polarization of the electromagnetic field with a periodic dielectric permittivity is considered. In the second part of this chapter we present a new numerical technique for solving periodic structure problems. This novel approach possesses several advantages. First, it allows for a fast evaluation of the Sommerfeld-to-Sommerfeld operator for periodic array problems. Secondly, this computational method can also be used for bi-periodic structure problems with local defects. In the sequel we consider several problems, such as the exterior elliptic problems with strong coercivity, the time-dependent Schrödinger equation and the Helmholtz equation with damping. Finally, in the third part we consider periodic arrays that are structures consisting of geometrically identical subdomains, usually called periodic cells. We use the Helmholtz equation as a model equation and consider the definition and evaluation of the exact boundary mappings for general semi-infinite arrays that are periodic in one direction for any real wavenumber. The well-posedness of the Helmholtz equation is established via the limiting absorption principle (LABP). An algorithm based on the doubling procedure of the second part of this chapter and an extrapolation method is proposed to construct the exact Sommerfeld-to-Sommerfeld boundary mapping. This new algorithm benefits from its robustness and the simplicity of implementation. But it also suffers from the high computational cost and the resonance wave numbers. To overcome these shortcomings, we propose another algorithm based on a conjecture about the asymptotic behaviour of limiting absorption principle solutions. The price we have to pay is the resolution of some generalized eigenvalue problem, but still the overall computational cost is significantly reduced. Numerical evidences show that this algorithm presents theoretically the same results as the first algorithm. Moreover, some quantitative comparisons between these two algorithms are given.

In this chapter, we will address the potential applications of negative refraction in artificial periodic media. Different approaches will be considered depending on the targeted wavelength operation from microwaves down to optics. First, physical concepts to create such an abnormal propagation regime will be described: (i) negative permittivity and negative permeability engineering in patterned metallic or metallo-dielectric structures namely metamaterials and (ii) band structure engineering in full dielectric structures namely photonic crystals. Second, practical examples of real devices will be given, starting from negative refraction evidence in a two dimensional prism in microwaves, backward wave propagation in a periodically loaded transmission line to end with subwavelength focusing by a photonic crystal slab for optical waves. In the third part, other exciting properties beyond negative refraction will be evoked with the design of hyperlenses and cloaking devices.

Modeling of Metamaterials in Wave Propagation

This chapter focuses on acoustic, electromagnetic, elastic and piezo-electric wave propagation through heterogenous layers. The motivation is provided by the demand for a better understanding of meta-materials and their possible construction. We stress the analogies between the mathematical treatment of phononic, photonic and elastic meta-materials. Moreover, we treat the cloaking problem in more detail from an analytical and simulation oriented point of view. The novelty in the approach presented here is with the interlinked homogenization- and optimization procedure.

Progress in Computational Physics is a new e-book series devoted to recent research trends in computational physics. It contains chapters contributed by outstanding experts of modeling of physical problems. The series focuses on interdisciplinary computational perspectives of current physical challenges, new numerical techniques for the solution of mathematical wave equations and describes certain real-world applications. With the help of powerful computers and sophisticated methods of numerical mathematics it is possible to simulate many ultramodern devices, e.g. photonic crystals structures, semiconductor nanostructures or fuel cell stacks devices, thus preventing expensive and longstanding design and optimization in the laboratories. In this book series, research manuscripts are shortened as single chapters and focus on one hot topic per volume. Engineers, physicists, meteorologists, etc. and applied mathematicians can benefit from the series content. Readers will get a deep and active insight into state-of-the art modeling and simulation techniques of ultra-modern devices and problems. Periodic structure problems arise quite often in many modern application areas like semiconductor nanostructures (e.g. quantum dots and nanocrystals), semiconductor superlattices, photonic crystals structures, meta materials or Bragg gratings of surface plasmon polariton waveguides. This first volume treats both mathematical analysis of periodic structure problems and state-of-the art numerical techniques, such as frequency domain methods, beam propagation methods and eigenmode expansion methods. Several chapters are devoted to concrete applications of periodic media simulation. The book is a useful resource for individuals interested in complex wave mechanics of unique physical structures. 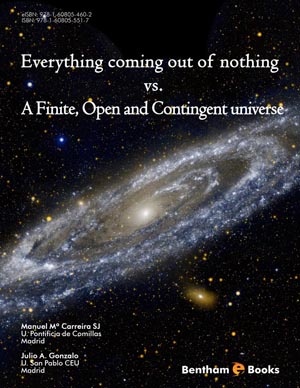