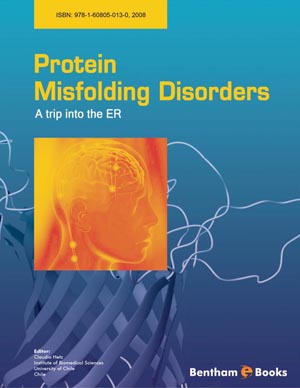 Protein Misfolding Disorders: A Trip into the ER

Amyotrophic lateral sclerosis, Alzheimer’s Disease, Parkinson’s Disease, Prion-related Disorders, Huntington’s Disease and several other neurodegenerative disorders share a common neuropathology, primarily featuring the presence of abnormal protein inclusions containing specific misfolded proteins. Recent evidence indicates that alteration in organelle function is a common pathological feature of protein misfolding disorders. The endoplasmic reticulum (ER) is an essential compartment for protein folding, maturation, and secretion. Signs of ER stress have been extensively described in most experimental models of neurological disorders and more recently in the brains of human patients affected with neurodegenerative conditions. ER stress is caused by functional disturbances, which result in the accumulation of unfolded/misfolded proteins at the ER lumen. To cope with ER stress, cells activate an integrated signaling response termed the Unfolded Protein Response (UPR), which aims to reestablish homeostasis through transcriptional upregulation of genes involved in protein folding, quality control and degradation pathways. Small molecules with chaperone-like activity have been shown to alleviate ER stress and decrease protein misfolding in experimental disease settings. In this chapter we overview the role of ER stress in pathological conditions such as protein misfolding disorders and spinal cord injury, and discuss possible pharmacological strategies to target the UPR with therapeutic benefits.

The endoplasmic reticulum (ER) is a well-orchestrated factory where secretory and membrane proteins are manufactured, modified and correctly folded prior to trafficking to their final destinations. Conditions that interfere with ER function lead to an evolutionarily conserved cellular stress response termed the unfolded protein response (UPR). The UPR initially transduces signals to reestablish ER homeostasis but with prolonged or acute ER stress these signals undergo a transition that initiate cell death. In this review, we summarize our current understanding of the mammalian UPR and discuss the cell-type and tissue-specific functions of UPR components revealed by studies from genetic mouse models.

The ER Chaperone GRP78 and Cancer

The unfolded protein response (UPR) is emerging as a major contributor to cancer cell adaptation to the pathophysiological stress of tumorigenesis. As a major endoplasmic reticulum (ER) chaperone, GRP78/BiP is induced by the UPR, and functions as a master regulator of the UPR signaling pathways. In this review, recent global analysis of Grp78 mRNA level in specific human tissues and its role in ER stress signaling and cell survival are discussed. Very recently the dynamic molecular events during the transcriptional induction of Grp78 were elucidated, providing kinetics of factor occupancy along the Grp78 promoter in cells subjected to ER stress. In addition to its established function of an apoptotic protein, a regulatory role of GRP78 in stress-induced autophagy in mammalian cells is also recently defined. In multiple cancer models, both in vitro and in vivo, GRP78 confers growth advantage and drug resistance to solid tumors. Finally, the newly discovered cell surface GRP78 provides potential cancer specific therapy.

The accumulation of ubiquitinated protein inclusions is a hallmark of amyotrophic laterals sclerosis (ALS), a rapidly progressing fatal neurodegenerative disease primarily affecting motor neurons. However, the exact cause of motor neuron death in ALS remains unclear. The unfolded protein response (UPR) is a homeostatic mechanism, which is activated in response to endoplasmic reticulum (ER) stress caused by unfolded or misfolded proteins within the ER lumen. The UPR activates three signalling pathways that lead to an up-regulation of protein chaperones and a block in general protein synthesis. However, chronic UPR activation promotes cell death via apoptosis. Here we review evidence from human patients and experimental models implicating ER-stress induced cell death in ALS. Recently, activation of all three UPR transduction pathways was shown in spinal cords of patients affected by ALS, including up-regulation of protein disulfide isomerase (PDI), an important ER chaperone, and activation of the ER stress-specific apoptotic factor caspase-4. Similarly, expression of mutant superoxide dismutase 1 (SOD1) proteins, which cause 20% of familial ALS cases, leads to activation of the UPR in neuronal cell culture and transgenic mutant SOD1 mice, which are the most widely accepted animal model of disease. Microsomal localisation and SNARE complex-regulated secretion of SOD1 implies entry into the ER-Golgi secretory pathway, and we discuss the disruptive effects of mutant SOD1 on the Golgi apparatus and general protein export. Importantly, the links between ER stress and other pathways implicated in ALS, including autophagy, oxidative stress and the ubiquitin-proteasome system, are becoming increasingly recognised, suggesting that ER stress is a central mechanism in disease. These observations suggest novel potential therapeutic targets for ALS.

The molecular pathogenesis of heritable neurodevelopmental disorders, including autism spectrum disorder (ASD) and speech-language disorder, is not well understood; although, several mutations in genes encoding neuroligin and FOXP2 have been identified. Here, we evaluate the relationship between the protein quality control system of the endoplasmic reticulum (ER) and the molecular pathogenesis of these disorders.

The endoplasmic reticulum (ER) is the intracellular organelle in which newly synthesized secretory and transmembrane proteins achieve proper structure as a result of post-translational modification, folding, and oligomerization. However, many of these proteins are malfolded (unfolded or misfolded) as a result of various intracellular or extracellular stimuli. ER stress is caused by disturbances of ER function with the accumulation of malfolded proteins and alterations in calcium homeostasis. To restore ER function, cells possess a highly specific ER quality control system to increase the capacity of protein folding and to reduce the amount of malfolded proteins in the ER. In case of prolonged ER stress or malfunction of the ER quality control system, apoptosis signaling is activated. ER stress-induced apoptosis has recently been implicated in human neurodegenerative diseases such as Alzheimer disease, Parkinson disease, polyglutamine diseases, and amyotrophic lateral sclerosis. This review summarizes the molecular mechanisms of the ER quality control system and ER stress-induced apoptosis and the possible roles of ER stress in neurodegenerative diseases.

Recent evidence supports a neuroprotective role for Wnt signaling in neurodegenerative disorders such as Alzheimer´s Disease. In fact, a relationship between amyloid-β-peptide induced neurotoxicity and a decrease in the cytoplasmic levels of β-catenin has been observed. Apparently, Aβ binds to the extracellular cysteine-rich domain of the Frizzled receptor inhibiting Wnt/β-catenin signaling. These studies indicate that a sustained loss of Wnt signaling function may be involved in the Aβ-dependent neurodegeneration observed in Alzheimer’s brain. So far, we have demonstrated that activation of Wnt signaling protects neurons against neurotoxic injuries, including both amyloid-β fibrils and Aβ oligomers by using either lithium, an inhibitor of the glycogen synthase kinase 3β, or different Wnt ligands. In particular, the activation of non-canonical Wnt signaling was able to protect postsynaptic regions and dendritic spines against Aβ oligomers. In conclusion, the activation of the Wnt signaling pathway could be proposed as a therapeutic target for the treatment of AD.

Accumulation of β-amyloid (Aβ) peptide in the brain is suggested to play a key role in the pathogenesis of Alzheimer’s disease (AD). Both the inherited familial and the sporadic forms of AD are characterized by increased levels of Aβ42. Incubation of cells with synthetic Aβ or administration of this peptide to animals is also associated with cellular degeneration. Currently, the mechanisms by which Aβ accumulates as well as the mechanisms that underlie Aβ-induced neurodegeneration in AD are not fully understood. Aβ is generated in part in the endoplasmic reticulum of neurons, degraded chiefely by the insulin degrading enzyme, and cleared out of the brain primarily by the low-density lipoprotein receptor-related protein. Stress in the endoplasmic reticulum can affect the processes involved in Aβ generation, degradation, and clearance, thus resulting in increased levels of this peptide in the brain. In this chapter, first, supportive data of role of disturbances in the endoplasmic reticulum homeostasis as an underlying mechanism of Aβ accumulation will be provided. Second, evidence from in vitro and in vivo studies showing that the endoplasmic reticulum is a target organelle for exogenous Aβ will be demonstrated. When applied to cells or administered to animals Aβ triggers endoplasmic reticulum stress that is ultimately deleterious to cells. Collectively, data from AD brains, animal models for AD, and in vitro studies converge to present compelling evidence that the endoplasmic reticulum stress is relevant to the pathogenesis of AD.

Prion diseases are infectious neurodegenerative diseases associated with the brain accumulation of the misfolded prion protein. Despite substantial knowledge of the mechanism of infection and disease transmission, little is known about the molecular pathways involved in neurodegeneration. Recent findings implicate endoplasmic reticulum (ER) stress as a key event in brain dysfunction. The available evidence indicates that accumulation of misfolded prion protein induces ER stress, followed by the activation of the unfolded protein response. Chronic stress produced by the sustained formation of misfolded proteins lead to neuronal apoptosis and synaptic alterations. In this article we discuss the role of ER stress in prion neurodegeneration and the signaling pathways implicated.

All cells are endowed with two catabolic pathways for degrading protein: the ubiquitinproteasome system (UPS) and autophagy. While these routes of protein degradation were long considered to be parallel and complementary systems, new evidence has revealed interaction between the UPS and autophagy, suggesting a coordinated relationship that becomes critical in times of cellular stress. Here we introduce the basics and parallels of the UPS and autophagy, review the evidence for cross-regulation of the two systems, and highlight their emerging coordinated relationship. Throughout, we review the evidence suggesting that impairment of autophagy could contribute to the initiation or progression of age-related neurodegeneration.