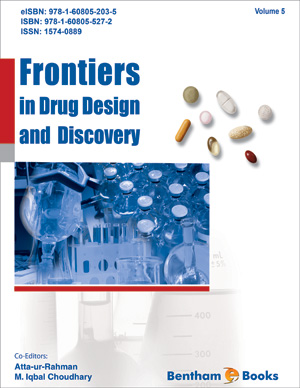 Frontiers in Drug Design and Discovery

Pegaptanib Sodium in the Treatment of Ocular Vascular Diseases: Expectations and Realities

Age related macular degeneration (AMD) and proliferative diabetic retinopathy (PDR) are two of the most dreadful ocular vascular diseases that often result in severe visual impairment, placing significant burdens on the health care. In the recent years, both AMD and PDR have garnered a great deal of attention in the ophthalmic community because newly available treatment modalities have drastically improved the previously poor prognosis associated with these diseases.

Toward the end of the last century, the focus of the treatment for exudative AMD had shifted from laser photocoagulation to photodynamic therapy with Verteporfin, and then to the current uses of antiangiogenic agents, which block the vascular endothelial growth factor (VEGF). Similarly, the Early Treatment Diabetic Retinopathy Study and the Diabetic Retinopathy Study had established laser photocoagulation as a widely accepted therapeutic strategy in PDR. However, recent data have suggested possible benefits of VEGF blocking agents in the treatment of PDR.

Pegaptanib sodium (Macugen®; Eyetech Inc., New York, NY, USA) is a selective RNA aptamer that inhibits the 165 isomer of the VEGF-A molecule. This drug was the first VEGF inhibitor molecule approved by the United States Food and Drug Administration for the treatment of ocular vascular diseases. Several studies over the past years have demonstrated the safety and efficacy of pegaptanib sodium in the treatment of both AMD and PDR. In this review we will examine the promises and expectations bestowed on pegaptanib by the medical community on its launch and the degree to which these have been met in the treatment of AMD and PDR.

Anxiety disorders are common and debilitating mental illnesses. Current pharmacological treatments are beset by problems of poor efficacy and side effect profiles. Increasing understanding of novel neurotransmitter systems and the interplay between these systems is broadening the scope of anxiolytic drug treatment. This article aims to describe the areas of current interest and possible future development of anxiolytic drugs by outlining recent patents in this field. A patent database was searched for 55 neurotransmitters, synonyms as well as compounds of recent known interest from May 2003 to July 2009. The internet resources Pubmed and Google Scholar were searched for peer reviewed literature using the same search parameters. Results were grouped into neurotransmitter systems to present an overview of recent developments in the neuropharmacology of anxiety disorders.

Functional coupling resins have been used to generate various protein- and ligand-immobilized gels for protein purification, proteomic research, drug development and synthetic biology. Recently, drug-immobilized resins have found broader applications for the analysis of drug-protein interactions, which are interfered with by the drug substances. Non-specific protein binding to the resin, not to the immobilized drug, is a common problem in the characterization of the bound proteins. Many commercial resins have more or less hydrophobic properties, leading to non-specific adsorption of proteins, in particular hydrophobic proteins. In addition, some resins are chemically unstable against the conditions used for drug immobilization: organic solvents are often used in immobilization reactions. We have developed a novel resin with functional amine group. It is a synthetic resin and hence chemically stable, and has a highly hydrophilic surface, minimizing non-specific protein adsorption. In addition, the resin surface can be made even more hydrophilic by surface coating. A couple of examples demonstrate its superior property for characterization of drug-protein interactions.

Bioassay or biological assay is a type of in vitro experiment that is typically conducted to measure the effect or activity of a substance or stimulus in a biological system, for estimating the nature, constitution, or potency of a material (or of a response) [1]. Bioassays are essential in the development of new protein drugs and vaccines. The dose-response curve from a bioassay can be a linear or non-linear by nature. There are many different statistical models proposed in the literature. To quantify the dose-response curve of a bioassay, the commonly used non-linear dose-curve is a sigmoid-curve such as the symmetric four-parameter logistic (4PL) function or the asymmetric fiveparameter logistic (5PL) curve, which takes curve asymmetry into consideration to overcome some drawbacks of the four-parameter logistic function. These include, for example, biased estimates of important model parameters, poor characterization of pharmacological pathways and the mechanisms, and inaccurate inference of drug-receptor interactions.

In this paper, we will focus on the pros and cons between a linear and a nonlinear curve fit for data collected from an analytical method, and the pros and cons using the symmetric 4PL and the asymmetric 5PL. In addition, we will describe a systematic way in selecting the linear dose range for a linear curve fit, and also discuss the design and other important issues such as selecting an appropriate variance function for a sigmoid-curve fit. Examples will be used to illustrate the key points.

There are described problems concerning chromatographic separation and determination of mono-, di-, tri-, tetra- and hexabenzyl derivatives of germanium in the paper. Investigations were taken, considering confirmed modification of stationary phase (silica gel) by chlorobenzylgermanium compounds in usual chromatographic process. The investigations were based on Nuclear Magnetic Resonance techniques (13C CP/MAS NMR, 29Si CP/MAS NMR), infrared spectroscopy with Fourier transform (FTIR) and imaging by means of scanning electronic microscope (SEM). Mentioned techniques allowed to characterize adsorbent surface on a molecular level and to confirm unambiguously the participation of benzylgermanium derivatives in the process of modification of stationary phase surface. Taking into consideration the interaction of analyzed compounds with adsorbent, a new methodology of chromatographic separation and determination of benzylgermanium derivatives, using so-called dedicated columns, has been elaborated. From practical point of view results obtained by means of elaborated analytic procedure were evaluated and controlled according to criteria of validation.

Development of New Anti-Cancer Drugs that Block the Kinase Pak1

Celebrating the 100th anniversary of the 1909 development of the first effective chemotherapeutic “Salvarsan” for the treatment of syphilis by Paul Ehrlich (1854-1915), the Father of Chemotherapy, we shall review the latest development of anti-cancer drugs that block the oncogenic kinase PAK1 which is required for the growth of more than 70% of all human cancers, including the major cancers such as breast and prostate cancers, as well as several formidable brain tumors such as glioma and NF (neurofibromatosis) tumors, hepatoma, melanoma, multiple myeloma, pancreatic, colon, lung, cervical, ovarian and thyroid cancers. This unique kinase is essential not only for the malignant (anchorage-independent) cell division, but also for both metastasis and angiogenesis of cancers. Thus, anti-PAK1 drugs, synthetic or natural products, would be potentially powerful therapeutics for these PAK1- dependent tumors. Among these anti-PAK1 drugs, antibiotics FK228, a HDAC (histone deacetylase) inhibitor, and Bio 30, a CAPE (caffeic acid phenethyl ester)-based extract from New Zealand propolis, are the most potent so far. Since PAK1 is not essential for the normal cell growth, none of these anti-PAK1 drugs causes any serious side effects. Furthermore, several non-cancerous diseases such as AIDS (HIV-infection), Alzheimer's (AD) and Huntington's (HD), inflammation (asthma and arthritis), epilepsy, and malaria also depend on this kinase, these anti-PAK1 drugs would be potentially useful for these non-cancerous diseases as well. Since this kinase normally inactivates a heat shock gene called HSP16 in all eukaryotes from yeast to human, it becomes possible to screen for anti-PAK1 drugs, both fast and inexpensively, using a tiny transparent nematode 1 mm long, called C. elegans, which carries a chimeric gene called HSP16: GFP.

Gliomas are derived from astrocytes, oligodendrocytes, and ependymal cells and account for approximately 80% of malignant primary tumors in the central nervous system (CNS). The current glioma treatment consists of surgical removal of as much of the tumor as possible, succeeded by combined radio- and chemotherapy. However, this treatment is far from sufficient due to inappropriate potency of available chemotherapeutics, leaving gliomas, especially the astrocytic tumor glioblastoma multiforme, among the most malignant conditions. A novel experimental approach is to employ targeted drug delivery specifically to the tumor. This can be done using molecular targeted drugs aiming at interfering with tumor-specific molecular signaling pathways, or targeted drug carriers that specifically bind to the cellular surface. Targetable drugs can attack signaling pathways driving cellular growth or proliferation, thus acting primarily at the cancer cells or tumor endothelial cells, respectively. Antibodies that specifically bind to cell surface molecules of glioblastoma cells or tumor endothelium are used to direct intracellular accumulation of highly toxic molecules to exert their deleterious effects. This will cause a direct demise of the glioblastoma tumor, either directly due to the targeting of cancer cell surface molecules, or indirectly due to targeting to molecules specifically expressed by newly formed endothelial cells of sprouting capillaries, leading to vascular collapse and impairment of the vascular nutritional route. This paper reviews the current progress in treatment of glioblastoma multiforme using targeted therapy to glioblastoma cells, tumor endothelial cells, and a combination of these strategies.

Design of Anti-Fasn Molecules as a New Anti-Tumour Modality

Every year pharmaceutical companies devote a great deal of time and significant amounts of money to research into new anti-target drugs and therapies for cancer treatment. Since the 1990s mounting evidence has pointed to an important role of fatty acid synthase (FASN) in tumour cell survival and malignity. Since highly proliferating cancer cells have a constant need to synthesize fatty acids (FA) de novo, two regulatory enzymes – FASN and acetyl- CoA carboxylase (ACC) – and one intermediate of lipogenesis (malonyl-CoA) were selected as druggable targets for the purpose of cancer treatment. FASN expression and activity has emerged as a common phenotype in most human tumour cells and is mostly absent in corresponding normal cells. The development of inhibitors of FASN activity has consequently started to appear as a novel anti-cancer modality. However, the in vivo use of some FASN inhibitors (e.g., C75) is limited by anorexia and the body weight loss this causes. This side effect has been associated with the stimulation of carnitine palmitoyltransferase- 1 (CPT-1), considered the rate-limiting step in the mitochondrial oxidation of FA. Thus, there is a need to selectively design inhibitors of FASN that do not stimulate FA oxidation through carnitine palmitoyltransferase-1 (CPT-1). Recently, it has been reported that epigallocatechin 3-gallate (EGCG) inhibits FASN, induces apoptosis in a number of tumour cell lines and reduces the size of tumours in animal models, with no effect on CPT-1. The main disadvantage of EGCG is its cytotoxic IC50 values. These results, together with the recently published crystal structure of FASN and the molecular description of its active sites, may be of crucial importance for creating novel EGCGrelated inhibitors that specifically target FASN.