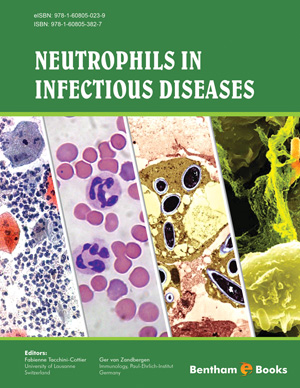 Decades ago, neutrophil granulocytes have been recognized as professional phagocytes. In their granules they store a massive array of antimicrobial enzymes and peptides which they can release either to the outside or into the phagosome, where phagocytosed microorganisms are quickly killed. Some years ago a different antimicrobial function of neutrophils was discovered: once stimulated, neutrophils can undergo a cell death program that induces massive structural changes and finally leads to the formation of Neutrophil Extracellular Traps (NETs), which can bind and kill microorganisms outside the cell. In this review, the current knowledge about antimicrobial properties of NETs is summarized and microbial strategies to escape NETs are discussed.

This chapter gives examples of the use of standard and advanced light microscopy techniques to visualize the interaction of selected pathogens with neutrophils in living animals. To date the knowledge on the dynamic interaction of invading pathogens with immune cells is at the very beginning. We focus on recent studies of the parasites Toxoplasma, Plasmodium and Leishmania in laboratory mice and the bacterial agent Pseudomonas in zebrafish. In addition we discuss the basic imaging requirements and some technical pitfalls that can occur during image acquisition and data analysis. Advanced imaging approaches have become an essential tool in modern cell biology, which is also reflected by the rapid development of new high-tech equipment.

Neutrophils in the Context of Polymicrobial Sepsis

Sepsis is defined as systemic inflammation in the setting of infection. Sepsis may evolve to severe sepsis and septic shock, which are the end result of complex interactions between infecting organisms and several elements of the host response. The severe forms of sepsis are associated with evidence of organ dysfunction and high lethality rates. This chapter focuses on the putative role of neutrophils in the pathogenesis of sepsis. Neutrophils play essential roles in host defence through their ability to clear bacterial and other infections. To this end, neutrophils have to migrate to the site (focus) of infection where they will phagocytise and kill bacteria and release mediators, necessary for the activation of other cell types. However, failure of neutrophils to migrate into the site of infection may facilitate systemic dissemination of the pathogen leading to release of pathogen, pathogen-associated products and inflammatory mediators in the circulation. The latter, when in high concentrations in the circulation, can activate neutrophils and other leukocytes in the systemic compartment leading to damage of healthy tissues and death. In this chapter, we discuss some of the mechanisms which lead to dysregulated recruitment of neutrophils to the infection focus and their relevance to the development of multi-organ injury and severe sepsis.

The Role of Neutrophils in Chlamydia pneumoniae Infection: First Line of Defense or the Gateway for Systemic Dissemination?

The obligate intracellular bacterial pathogen Chlamydia pneumoniae (Cpn) is an established pathogen in acute lung infections. Recruitment of polymorphonuclear neutrophil granulocytes (PMN) to the lung is one of the first events upon acute infection. The functional role of PMN in Cpn pathogenicity and clearance is unclear. In vitro studies showed that Cpn stays alive after internalization by PMN in an opsonin-independent manner and are still able to multiply. While uninfected granulocytes become apoptotic, the lifespan of Cpn infected PMN is dramatically increased for more than 3 days. Ingestion of Cpn is accompanied by a complete re-programming of central PMN effector functions which are involved in cell survival, pathogen clearance and innate immunity. In vivo observations in rabbits suggest that PMN are centrally involved in the systemic dissemination of Cpn to the blood after acute lung infection. Furthermore, depletion of PMN in the lung seems to hamper chlamydial growth and progeny in the lung. In this review we will summarize studies on direct interactions of Cpn and PMN both in vitro and in vivo. Accumulating evidence suggest a central role of PMN in the systemic dissemination of Cpn infection.

Mycobacterium tuberculosis is a major human pathogen responsible for about two million deaths per year. The only available vaccine is the live attenuated strain M. bovis Bacille Calmette Guérin (BCG) that partially protects against pulmonary tuberculosis (TB). Mycobacteria are intracellular pathogens that are able to parasitize macrophages. The inflammatory process induced by mycobacterial infection also recruits neutrophils. Although neutrophils may directly kill some bacilli, this is not the major control they exert on mycobacterial infections. Neutrophils are able to shuttle BCG to the draining lymph node. They crosstalk with dendritic cells to increase BCG antigen presentation and modify cytokine expression profile. Neutrophils help in the early organization of mycobacterial granulomas that are key structures to contain bacilli. However, neutrophils are Janus-like cells that also have detrimental effects on Mycobaterium tuberculosis (Mtb) infection. Neutrophil accumulation in lungs correlates with Mtb high susceptibility in mice and with active pulmonary TB in humans. Mouse neutrophils secrete anti-inflammatory IL-10 upon mycobacterial stimulation that counters Mtb control. Recent discoveries have shown that Myeloid Derived Suppressor Cells - another granulocytic cell population close to neutrophils and exerting strong T cell suppression – are also recruited upon BCG vaccination in the mouse model which opens new perspectives on the key role played by granulocytes on the mycobacterial immune control.

The development of a protective immune response to microorganisms involves complex interactions between the host and the pathogen. The murine model of infection with Leishmania major (L. major) allows the study of the factors leading to the development of a protective immune response. Following infection with the protozoan parasite L. major, most strains of mice heal their lesions, while a few fail to control infection, both processes linked to the development of specific T helper subsets. The early events occurring during the first days following parasite inoculation are thought to be critical in the development of the Leishmania-specific immune response. Neutrophils are the first cells arriving massively to the site of infection, and recent evidence points to their role as organizers of the immune response, yet their specific role in this process remains elusive. Through interactions with cells present at the parasite inoculation site, and possibly within the draining lymph nodes, neutrophils could have an impact not only on the recruitment of inflammatory cells but also on the activation of local as well as newly migrated cells that will be crucial in shaping the Leishmania-specific immune response.

Neutrophils are the most common type of leukocyte. They are produced in large number by the bone marrow and they rapidly accumulate at sites of invasion by microbial pathogens, including the opportunistic protozoan parasite Toxoplasma gondii. Here, current data on the role of neutrophils during T. gondii infection are reviewed. On the one hand, neutrophils may play a role in facilitating establishment of a stable host-parasite interaction. They may maximize the probability of parasite transmission by promoting an effective immune response that enables both host survival and establishment of persistent infection. On the other hand, these cells may be important purely for the host by acting as potent destroyers of parasites. Collateral tissue damage may be the unavoidable consequence.

Neutrophils as Potential Safe Niche for Leishmania and Anaplasma

Host defense to intracellular pathogens depends upon both innate and adaptive cell-mediated immune responses. Polymorphonuclear neutrophil leukocytes which belong to the innate immune system are the first cells that are recruited massively within hours of microbial infection. The importance of neutrophils in the development of an immune response is only emerging as they have long been considered by immunologists as short lived, non-dividing cells, of poor interest. Now, neutrophils are emerging as key components of the inflammatory response, and are shown to have immunoregulatory roles in microbial infections. The impact of neutrophils on cells present at the site of infection is only beginning to be studied and deserves more attention. This e-book provides an overview of the recent advances made in the field of neutrophil biology and motions towards some of the exciting new directions in which neutrophil research is moving.