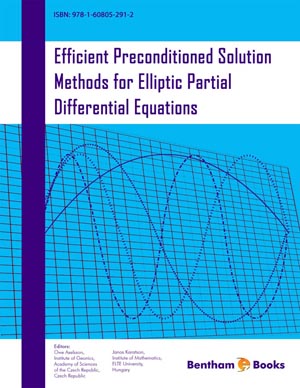 Preconditioners based on various multilevel extensions of two-level finite element methods (FEM) lead to iterative methods which have an optimal order computational complexity with respect to the size of the system. The methods can be based on block matrix factorized form, recursively extended via certain matrix polynomial approximations of the arising Schur complement matrices, or on additive, i.e., block diagonal form, using stabilizations of the condition number at certain levels. In this survey, the method in focus is the Algebraic MultiLevel Iteration (AMLI). It was introduced and studied by Axelsson and Vassilevski for the case of isotropic elliptic problems in [1,2], and is referred to as AMLI. The further development of robust AMLI methods for elliptic problems is systematically discussed in the recently published monograph [3].

While a huge amount of papers are dealing with the solution of FEM elliptic systems, the related time dependent problems are much less studied. A comparative analysis of robust AMLI methods for elliptic and parabolic problems is presented in this chapter. A unified framework for both Courant conforming and Crouzeix-Raviart nonconforming linear finite element discretizations in space is used. The considered multiplicative AMLI methods are based on an approximated block two-by-two factorization of the original system matrix. A key ingredient for the efficiency of the AMLI preconditioners is the quality of the utilized block two-by-two splitting, quantified by the so-called Cauchy- Bunyakowski-Schwarz (CBS) constant, which measures the abstract angle between the two subspaces, associated with the two-by-two block splitting of the matrix. All presented methods lead to preconditioners with spectral equivalence bounds which hold uniformly with respect to both the problem and discretization parameters, and optimal total computational complexity of the related Preconditioned Conjugate Gradient (PCG) or Generalized Conjugate Gradient (GCG) solvers. The theoretical results are supported by numerical tests with an emphasis on the case of nonconforming FEM systems.

We discuss a family of block preconditioners for iterative solution of symmetric saddle point type problems arising from PDE discretizations. The building blocks consist of preconditioners for smaller sized, symmetric positive definite operators, which induce a norm in which the whole system is continuous and stable uniformly with respect to the mesh size h. We provide eigenvalue estimates and derive conditions under which the conjugate residual method using block preconditioners has convergence rate bounded independently of h.

The purpose of this chapter is to discuss a general approach to the construction of preconditioners for the linear systems of algebraic equations arising from discretizations of systems of partial differential equations. The discussion here is closely tied to our earlier paper [1], where we gave a comprehensive review of a mathematical theory for constructing preconditioners based on the mapping properties of the coefficient operator of the underlying differential systems. In the presentation given below we focus more on specific examples, while just an outline of the general theory is given.

In this work, we describe a similar sparse preconditioner. However, this preconditioner does not require the user to rediscretize the problem, but only to provide access to the high-order element stiffness matrices. The preconditioner is then an approximate inversion of this sparse matrix with algebraic multigrid, or any other robust method. The sparse matrix is constructed by representing the high-order element stiffness matrices with a sparse approximation generated using a least-squares approach. The least-squares approach aims to accurately represent the low-order modes of the highorder element stiffness matrix. We compare results to Orszag's approach, where the inverse of the sparse matrix is approximated with a single V-cycle of algebraic multigrid, and to a naive approach that uses a single V-cycle of algebraic multigrid, built from the original high-order system, as the preconditioner.

In this work we present a survey of some geometric results on tetrahedral partitions and their refinements in a unified manner. They can be used for mesh generation and adaptivity in practical calculations by the finite element method (FEM), and also in theoretical finite element (FE) analysis. Special emphasis is laid on the correspondence between relevant results and terminology used in FE computations, and those established in the area of discrete and computational geometry (DCG).

This e-book presents several research areas of elliptical problems solved by differential equations. The mathematical models explained in this e-book have been contributed by experts in the field and can be applied to a wide range of real life examples. Methods explained include pre-conditioned conjugate grid models, higher order discretization and finite element mesh generation. This e-book should be a useful reference for scholars and professionals interested in elliptical partial differential equations.