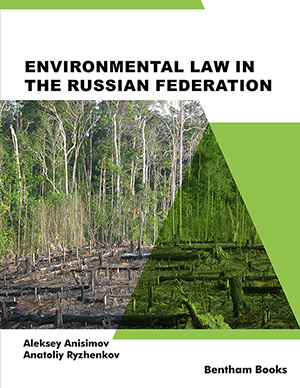 Environmental Law in the Russian Federation

Environmental Law as a Branch of Russian Law

Human and Civil Right to a Favorable Environment

The authors prove that with the purpose to implement the tasks of ensuring the appropriate quality of the environment in Russia, environmental legislation provides for a system of measures, which, along with giving a special legal status to certain specially protected areas or establishing rules and regulations for the protection and rational use of natural objects, also includes special environmental requirements mandatory for observance and execution by all legal entities, individual entrepreneurs and citizens engaged in various types of economic and other activities that have a negative impact on the environment. The list of these types of activities is not exhaustive and includes special rules and requirements for real estate construction, operation of industrial, power and agricultural facilities, transport, etc. The requirements are comprehensive and thus different from the duties imposed on users of natural resources and third parties using certain natural resources (forests, water, etc.). In particular, rules dedicated to the protection of forests from fires contain sufficiently unique prescriptions that can be used only to protect forests. In a similar manner, the measures for fauna protection through the maintenance of the Red Data Book are clearly localized by this natural object. The comprehensive nature of the requirements for certain types of activities consists in the fact that they are aimed at regulating the activities threatening several natural objects rather than one. Requirements for environmentally safe operation of power facilities are a typical example in this case. Requirements for construction and operation of nuclear power stations are intended to exclude any repetition of the tragedy of the Chernobyl Nuclear Power Plant, when the radiation had a negative impact on not one component of the natural environment (land, forests, water, fauna, air) but all at once, and the environment contaminated with radiation caused harm to the life and health of hundreds of thousands of people. Harm to nature and the health of citizens from tests of nuclear weapons or from more peaceful activities, for example, the use of pesticides in agriculture is equally complex with regard to its consequences. In the latter case, violation of environmental requirements in the field of chemicalization of agriculture results in harm to land, surface and ground water bodies.

All types of natural objects are closely interlinked with each other. Deterioration of the quality of one of them inevitably leads to particular consequences for the condition of the other elements of the ecological system. This is why legislation stipulates a range of measures aimed at protecting both the environment in general and its constituent components. Land protection focuses on the preservation of soil fertility. From the analysis of the Forest Code of the Russian Federation it follows that there are nature protection rules of a general nature covering all types of forests and special rules specifying these general provisions for certain categories of forests. In particular, the general environmental rules consist in the fact that all forests are subject to protection from fires, pollution (including contamination by radioactive substances) and other negative impact as well as protection from harmful organisms. The legal regime of water bodies varies depending on whether they are located on the surface of the earth or they are ground water bodies. The Government of the Russian Federation approved special rules for protection of both surface and ground water bodies. The task of water protection is solved by imposing duties on the subjects of water relations – citizens and legal entities as well as public authorities. For the purpose of water protection, environmental and water laws establish a range of general and special requirements. The protection of fauna habitat is one of the areas of fauna protection activities. Legislation establishes two regimes of the protection of animals. The general regime of the protection is established by the Federal Law “On Fauna” (based on the criterion of the possibility of being an object of hunting and fishing, two categories of animals are distinguished); the special regime is established in relation to animals attributed to specially protected ones, including those listed in the Red Data Book of Russia. Researchers point out two main problems in the area of rational use and protection of subsoil. They are the inefficient use of subsoil resources with the increasing complexity of field exploitation and the growing impact of mining on the environment. Finally, the consistent system of legal rules regulating the protection of air from anthropogenic impact is considered at the end of this Chapter

Concept and Types of Areas with a Special Environmental Legal Regime

The Russian Federation now stipulates the possibility of establishing two special environmental legal regimes in the country, including specially protected natural areas (SPNAs) and ecological disaster zones. The essence of both environmental legal regimes consists of establishing a special procedure for the use and protection of a clearly localized territory different from the regime of using land plots and other natural objects of the country. This manifests itself in establishing features of the management of this territory, the regime of restrictions of civil and corporate rights, as well as additional funding of a range of special nature protection activities. The purpose of the establishment of special restrictions and prohibitions for economic and other use of these territories is to create additional guarantees of the achievement of the main objective of environmental legislation – to ensure a favorable environmental quality. This means that the establishment of the special environmental legal regime is necessary if the general environmental requirements (licensing, standardization, etc.) do not make it possible to preserve and restore specific natural objects and systems in the appropriate state. The list of the relevant prohibitions and restrictions is contained in federal and regional environmental legislation as well as in land, water, forest legislation, legislation on natural and cultural heritage, etc. Particular additional measures in the area under consideration can also be adopted at the municipal level with the corresponding legal acts of local government bodies. The legal status of both varieties of areas with a special environmental legal regime (SPNAs and ecological disaster zones) has several similar and different features. The purposes of giving a particular territory a special environmental legal regime are also the same – to ensure everyone's right to a favorable environment. Significant differences between these territories consist in the objective related to them. SPNAs are created to conserve certain ecological systems for present and future generations and to study the unique natural areas; ecological disaster zones are created to restore disturbed ecosystems. In this regard, the access of citizens to SPNAs is not prohibited (it is even encouraged), while they have to obtain a special permit to enter an ecological disaster zone. Consequently, the special regime is established to ensure the protection of two territories that are opposite to their ecological state.

International Cooperation in the Field of Environmental Protection

In the era of globalization, international cooperation becomes more important since no country in the world can solve the problem of global climate change or pollution of the World Ocean on its own. However, the interpenetration of the most successful legal rules and institutions of other countries into national legal systems is a no less significant trend. The study of this comparative aspect makes it possible to better understand the advantages and disadvantages of Russian environmental legislation, formulate constructive suggestions for the Russian legislator, and identify possible ways of bilateral cooperation in environmental issues that are understood in the national legislation of two or more countries. Russian environmental legislation is more closely linked to the CIS countries both for the geographical reason (as neighbors) and because these countries were part of the USSR for many years, and the approaches to the legal regulation of environmental (and many other) social relations that were established during that period of our joint history are still used today. The environmental laws of the Russian Federation, the Republic of Kazakhstan, and the Republic of Belarus can be compared as an example. The criterion for comparison is the content of the main environmental legal institutions included in these laws. The relevant environmental legal institutions in Russia and these countries can coincide completely, partially, or don’t not coincide at all. The main focus in this chapter is not so much on comparing the laws of the Republics of Kazakhstan and Belarus with each other but comparing them with the basic institutions of Russian environmental law. The fundamental difference between environmental law of the European Union and the Russian Federation is not only the supranational nature of EU directives but also the fact that the EU almost does not regulate natural resource management issues e.g., in terms of the procedure for the provision of natural resources based on the right of ownership or other rights. This is the scope of national legislation of the member countries. Both in Russia and the environmental law of the EU, we can observe a trend of ecologization of related legislation: it means environmental rules are introduced into the regulatory acts governing related areas of social relations (transport, power industry, fight against unemployment, etc.). Moreover, in this chapter, the authors point out several characteristics of not only the environmental law of the United States but of Russia, China, the European Union, or many other countries and consider the current distinctive features of the nature protection policy of China.