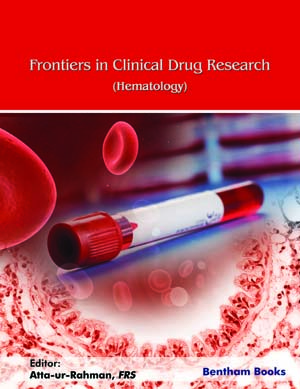 In the recent past, TRP (Transient Receptor Potential) channels have been emerging as promising therapeutic targets to treat different disease conditions. In mammals, 28 TRP channel genes have been reported. TRP channels are nonselective cation channels that respond to different exogenous stimuli, including certain chemicals, osmotic stress, temperature change, etc. Until now, studies on TRP channels in relation to blood disorders are only a handful. Recently, several TRP channels have emerged as potential contributors to different hematological disorders, including blood iron deficiency (TRPML), hereditary hypertension (TRPC3) and blood pressure (BP) regulation (TRPM4). Dysregulated activation of several TRP channel family members has been reported in sickle cell disease (SCD) and in the transgenic mouse model of SCD. In this regard, TRPV1 and TRPA1 channels have been identified as major contributing factors in the rodent SCD pain. Erythropoietin (Epo), a glycated cytokine, secreted by the kidney, plays an important role in red blood cell (RBC) synthesis (erythropoiesis). In murine RBCs, Epo was found to cause TRPC4/TRPC5-mediated calcium entry that certainly appears interesting in order to understand the roles of TRP channels in erythropoiesis. Present evidence indicates functional roles of several TRP channels (TRPC3, TRPC6, TRPV1, TRPV3, TRPV4, TRPA1, TRPM6 and TRPM7) in the progression and/or prevention of fibroproliferative disorders in vital visceral organs including blood vessels and emerges as the main contributor towards several inflammatory processes. TRPV1 channel has gained attention as a required step for Tcell receptor activation by mitogens. Studies involving cell lines derived from hematological and other malignancies indicate TRPV1 could be a potential target for novel cytotoxic therapies. Altered functional roles of several TRP channels have been identified in different classes of hematological malignancies, including leukemias, multiple myelomas (MM) and B-and T-cell lymphomas. TRP channels are the modulators of the hematopoietic cells and control cellular proliferation, differentiation and apoptosis. Thus, TRP channels appear to be promising targets for hematologic cancer therapy and those channels warrant further investigations for novel pharmaceutical and clinical strategies. TRPC1ε has been recently reported as preosteoclasts and important functional roles of TRPC1ε in recruiting a subpopulation of circulating mononuclear cells from blood to bone surface have been described in relation to cellular differentiation. Epigenetic changes in TRPA1 promoter methylation in white blood cells (WBC) have been identified as predictive of human thermal pain sensitivity. An inverse relationship exists between TRPV1 and TRPA1 gene expression in peripheral blood cells with increasing pain symptoms. This chapter reviews different TRP channel expressions in blood cells with a focus on recent advancements of understanding TRP channels as potential therapeutic targets in different blood disorders. This chapter also briefly discusses a few TRP channel modulator drugs that had shown promising results in preclinical studies or in clinical trials. For the sake of simplicity and to stay focused on the present issue of the journal, this chapter briefly discusses the functional roles of some TRP channel proteins that have been emerging as possible drug targets to treat some blood disorders and hematological malignancies.

Advanced Applications of Gene Therapy in the Treatment of Haematologic Disorders

Gene therapy is an experimental technique for treating genetic disorders; it is designed to introduce a functional gene into a specified cell instead of missing or defective ones in order to correct the disease process by restoring, modifying or improving the cellular function. The past decade has been characterised by extreme advances in gene therapy which are considered an avenue of hope for a number of blood diseases that are difficult to be effectively treated with medications, recombinant therapeutic proteins or even transplantation. A number of preclinical and clinical studies have been conducted to develop gene therapy for patients with various genedeficient haematological disorders, i.e. haemophilia, β-haemoglobinopathies, leukaemia, lymphoma and other haematologic. Results from some clinical trials indicate that gene therapy can cure or improve many inherited or acquired hematologic disorders. It has the potential to improve the quality of life of those patients who are fully dependent on life-long parenteral therapy with recombinant proteins or blood and its products. However, the increased knowledge about the biological basis of the haematological disorders is associated with important advances in therapeutic management prevention of new cases. In this chapter, the current status of gene therapy will be reviewed with a focus on recent technologies such as gene delivery vectors, CRISPR genome editing technology, and CAR T-cell therapy, and their applications in the treatment of various blood disorders, in addition to the demonstrations of the outcomes of selected clinical studies, followed by a summary of the current challenges to gene therapy and future outlook.

This entity is characterised by an iron-dependent accumulation of lipid peroxides, and it can be induced by experimental compounds and clinical drugs in cancer cells as well as certain normal cells. Some of the inductors are erastin, Ras-selective lethal small molecules (RSL3 and RSL5), buthionine sulfoximine, acetaminophen, ferroptosisinducing agents, lanperisone, sulfasalazine, sorafenib, and artesunate.

Induction of ferroptosis by drugs has been shown to inhibit cancer cell growth, both in Ras-dependent and Ras-independent forms. This fact suggests that cancer cells display genetic heterogeneity in the timing of the ferroptosis response.

Malignant haematological entities have been subject to a wide variety of available treatments. However, the development of resistance to chemotherapeutic agents represents one of the biggest obstacles in the effectiveness of the treatment of some haematological neoplasms such as acute myeloid leukaemia. Ferroptosis has the potential to modify the course of treatment, and hence the prognosis, not only of acute myeloid leukaemia but also of diffuse large B-cell lymphoma, T-lymph coelom and myeloma.

An improved understanding of the role of ferroptosis in cancer and injury-associated diseases will create a new opportunity for diagnosis and therapeutic intervention.

The idea of using liquid biopsy in the field of oncology is relatively new. Its significant advancement and revolutionized diagnosis and therapy monitoring in cancer research is strengthening the field of precision medicine. Liquid biopsy is a noninvasive method of isolation and detection of circulating tumor cells, circulating tumor DNA and exosome depict the exact picture of early stage cancer genomics and proteomics. The techniques like digital PCR, CAPPSEQ, BEAMing and next generation sequencing contributed to utilize liquid biopsy in clinical settings. It can facilitate cancer prognosis and early stage detection before metastasis. Importantly, it can help in finding responders and non-responders, devising treatement plan and screening of new drugs. In this chapter, the clinical application of liquid biopsy in solid tumor management with focus on Hepatocellular Carcinoma (HCC) is discussed. Besides the advancement in diagnostics and treatment of HCC, the prognosis is still poor with a high rate of mortality. Liquid biopsy has the potential for better diagnosis and monitoring of HCC in patients. We have also summarized different advanced diagnostic techniques for the isolation and enrichment of circulating tumor cells, circulating tumor DNA and exosome. Moreover, the limitation of the use of liquid biopsy in the healthcare system is also the point of discussion.

Frontiers in Clinical Drug Research &ndash; Hematology is a book series that brings updated reviews to readers interested in learning about advances in the development of pharmaceutical agents for the treatment of hematological disorders. The scope of the book series covers a range of topics including the medicinal chemistry, pharmacology, molecular biology and biochemistry of natural and synthetic drugs employed in the treatment of anemias, coagulopathies, vascular diseases and hematological malignancies. Reviews in this series also include research on specific antibody targets, therapeutic methods, genetic hemoglobinopathies and pre-clinical / clinical findings on novel pharmaceutical agents. Frontiers in Clinical Drug Research &ndash; Hematology is a valuable resource for pharmaceutical scientists and postgraduate students seeking updated and critically important information for developing clinical trials and devising research plans in the field of hematology, oncology and vascular pharmacology. The fourth volume of this series features 5 reviews: -TRP Channels: Potential Therapeutic Targets in Blood Disorders -Hypercoagulable States: Clinical Symptoms, Laboratory Markers and Management -Advanced Applications of Gene Therapy in the Treatment of Hematologic Disorders -Ferroptosis - Importance and Potential Effects in Hematological Malignancies -Clinical Application of Liquid Biopsy in Solid Tumor HCC: Prognostic, Diagnostic and Therapy Monitoring Tool