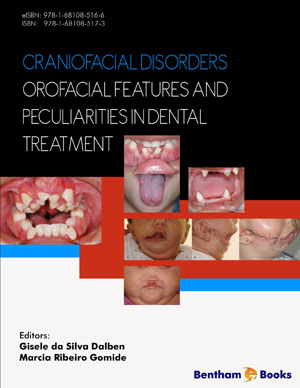 The focus of this chapter is on normal oro-facial embryogenesis; on the developmental basis for facial defects that fall within the holoprosencephaly spectrum; and on the genesis of common and unusual oro-facial clefts. A thorough understanding of normal morphogenesis coupled with appreciation of the dysmorphogenic events underlying the defects considered in this chapter should aid the reader in also better appreciating the developmental basis for many of the other abnormalities addressed in this text. The prenatal stages considered in detail are present from the 3rd through the 8th weeks of human gestation, with emphasis being placed on description of the development of the growth centers (prominences/processes) that comprise the human oro-facies. The presence and significance of some of these oro-facial growth centers for both normal and abnormal embryogenesis have been largely overlooked in the past, due in part to the paucity of early human embryos available for careful analyses with modern techniques. To aid in resolving this problem, descriptions provided herein are largely founded on a relatively recent series of scanning electron micrographs of human embryos. Regarding clefting, knowledge of normal oro-facial morphogenesis, coupled with basic research findings, support the premise that the junctions of the various growth centers correspond to the sites of common and unusual oro-facial clefts as described by Tessier in 1976 [45]; that the embryonic period is when the vast majority of oro-facial clefts are induced; and that, in most cases, the proximate cause of clefting is failure of the normal growth and development of single or adjacent orofacial growth centers. As for holoprosencephaly, both genetic abnormalities and environmental insults can underlie the dysmorphology.

This chapter aims to explain the basic concepts of genetics for the dental professional. Knowledge on the definitions of types of malformations, as well as the basis and nomenclature of genetic terms, will be fundamental for the readers to allow a thorough understanding on the aspects presented in Chapters 4 to 9.

This chapter presents the mechanisms of teratogenesis and depicts the main teratogens involved in disorders of craniofacial development. This knowledge will aid the understanding on aspects presented in Chapters 4 to 9.

The rare facial clefts receive this name due to their low prevalence. The most known and used classification was proposed by Tessier and employs a distinct numbering to indicate clefts affecting the soft and hard tissues, taking as reference point the eyelid and the orbit. The oral characteristics of individuals with rare facial clefts are not specific, and in most cases the oral phenotype follows the structures affected by the defect. Due to the complexity of the cleft and the number of affected structures, the surgical and dental rehabilitation is complex and extensive, requiring the participation of a multi- and interdisciplinary team.

Orofacial clefts are among the commonest malformations affecting mankind; even though most cases of orofacial clefts are non-syndromic, they may also manifest concomitantly with a wide array of syndromes. These syndromes with orofacial clefts often also cause diverse tooth abnormalities; knowledge on these peculiarities is fundamental for professionals to allow proper dental care for affected individuals.

Craniosynostosis is the premature fusion of cranial sutures. This chapter addresses the craniosynostosis syndromes, which involve this premature fusion of cranial sutures associated with important disorders to the craniofacial complex and teeth, requiring emphasis on prevention, special care during dental treatment, and a multidisciplinary team approach for their full rehabilitation from early infancy through adulthood.

The pharyngeal arches develop in the human embryo around five weeks of pregnancy. Disorders in the development of the first and second pharyngeal arches may lead to significant malformations of the face and ears. Syndromes involving the pharyngeal arches often involve tooth abnormalities, requiring regular dental follow-up with specialized management by a multidisciplinary team.

A wide array of syndromes reported in the literature have significant impact on the craniofacial complex, with great influence on the facial aspect, which is usually typical of each syndrome. For this reason, this chapter refers to these disorders as “syndromes with unusual facies”, as described in the classical book of Gorlin et al.,. Affecting the craniofacial complex, these syndromes also often have significant implications for dental treatment and affected individuals may have peculiar dental needs.

Distraction Osteogenesis (DO), a procedure used for correction of large hypoplasia of facial segments, is a surgical technique that induces new bone formation by gradual separation of two bone surfaces osteotomized by a mechanical device called distractor; the principles of this surgery were initially designed by the Russian orthopedist Gavriil Ilizarov in 1951. Different pathological conditions, mostly syndromic, may present craniofacial deformities that may not be functionally and esthetically corrected by conventional treatment methods. Some examples include the mandibular hypoplasias (Pierre Robin sequence, Oculoauriculovertebral spectrum (OAVS), Treacher Collins syndrome, temporomandibular joint ankylosis, hypoplasia of the midface (common finding in individuals with syndromic craniosynostosis, such as the Apert, Crouzon, Pfeiffer, Muenke and Saethre-Chotzen syndromes). Even though DO is the method of excellence for the treatment of large hypoplasias, it should only be used when a large dentofacial deformity cannot be corrected by conventional orthognathic surgery, which may be used to refine the results achieved by DO in a second auxiliary stage.

Craniofacial Disorders &amp;ndash; Orofacial Features and Peculiarities in Dental Treatment presents detailed information about craniofacial disorders and their features. The contents of the book cover craniofacial embryology, craniofacial genetics and teratology, craniofacial abnormalities (etiology, systemic involvement, and treatment methods and surgical steps required for complex dentomaxillofacial reconstruction for aesthetic or functional improvements. This book is an easy-to-read handbook for clinical dentists who wish to enhance their knowledge on the subject and offer dental care for individuals affected by craniofacial disorders.