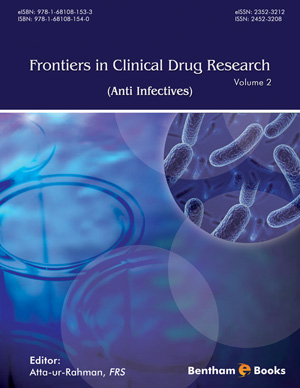 Bacterial infections remain one of the leading causes of death worldwide, and the options for treating such infections are decreasing, due to the rise of antibiotic-resistant bacteria. In fact, the continuing rise of antibiotic resistance is such a major global health concern that the World Health Organization has warned that we may enter a "postantibiotic era" within this century, and they propose that urgent actions should be taken. Nevertheless, since the pharmaceutical industry has not produced a new class of antibiotics for more than a decade, researchers are taking several approaches towards developing new classes of bacterial anti-infectives, including focusing on new targets and processes, such as bacterial biofilm formation, that is related to approximately 65% of human infections. Moreover, significant advances have been made in the development of therapies aimed to attenuate the damage produced by bacterial infections by the downregulation of bacterial virulence instead of directly targeting bacterial growth, in contrast to conventional antibiotics. Furthermore, other active research areas are the utilization of molecules produced by commensal and mutualist bacteria as antibacterials to inhibit the growth of pathogenic species, and to boost the immune system in order to promote the elimination of infections. Other alternative treatments are focused on inhibiting bacterial multidrug resistance mechanisms, such as the active efflux of antibiotics by multidrug efflux pumps. In this chapter, we discuss the recent advances in the development of novel bacterial anti-infectives, analyzing their anti-infective mechanisms, their activity in vitro and in vivo, and the advances toward their clinical implementation.

Antibacterial agents such as sulfonamides, penicillin, and streptomycin became available in the 1930s and 1940s and were quickly adopted into clinical practice. It was noted early on that bacteria, when exposed to antimicrobial agents, rapidly developed strategies to resist them. Penicillin resistance in Staphylococcus aureus was detected as early as in 1945. From the 1950s onwards, a large number of antimicrobial drugs became clinically available and had a major impact on the treatment of infections. Most recently, bacterial antibiotic resistance has grown exponentially along with the increasing use of antimicrobial agents, while at the same time the development of new antimicrobial agents has decreased dramatically. This has led to major global crises of infections with drug-resistant microbes, increased morbidity, and mortality, and increased health care costs.

A multifaceted approach is needed to detect, prevent, and control antibiotic resistance at local, national, and global levels. The National Action Plan for Combating Antibioticresistant Bacteria was developed by the CDC, and it provides a roadmap to guide the US in rising to this challenge. Implementation of antimicrobial stewardship programs, diligent surveillance for resistant bacteria, rigorous implementation of infection control practices, restriction of antibiotics for non-human and non-infectious purposes are needed to combat the growing threat of antibiotic resistance. Another important strategy to counter the menace of antimicrobial resistance is to develop new antibiotics with novel mechanisms of action.

In order to improve the design of clinical trials and better conceptualize research plans for the development of anti-infective drugs, it is important to take into consideration cutting-edge drug safety approaches that can be implemented during discovery and early phase studies, as well as promising methods and models for clinical research advancement. In the present text, we describe a holistic perspective inspired by chemoinformatics, systems biology, and predictive clinical pharmacology, to discuss the utility of in silico methods, preclinical models, genomics, translational biomarkers and postmarketing surveillance strategies for safety evaluation and risk detection during anti-infective drug development.

Since the discovery by Semmelweis that washing hands with chlorine decreased morbidity and mortality rates, the antimicrobial products market has grown tremendously. This chapter provides a brief introduction to the topical antimicrobial products currently on the market, how they are classified, how they work, and the purposes for which they are best suited. Among the first products used as a surgical scrub was an iodine complex (a tincture of iodine and an aqueous iodophor), which provides excellent immediate antimicrobial action. Another product, Chlorhexidine gluconate, which was first synthesized in 1950, has proved to provide high levels of antimicrobial activity and considerable effectiveness in healthcare personnel handwash applications. Alcohol and alcohol compounds also provide effective immediate effects but little to no residual or persistent activity. As the market has developed and scientific knowledge increased, product manufacturers have greatly improved product formulations, including the development of products containing quaternary ammonium compounds, which are used in household cleaners, disinfections, skin and hair care formulations, sanitizers, sterilizing solutions for medical devices, and even preservatives; parachlorometaxylenol product formulations are used primarily for healthcare personnel handwashes, as they are effective in removing transient microorganisms from the hands and have low skin irritation potential; and triclosan, which has fair immediate and persistent antimicrobial ability, but no residual action, has been formulated for a wide range of applications, including the food industry and consumer product lines. New products are constantly being formulated, tested, and brought to the market, according to the guidelines of the Food and Drug Administration.

Nosocomial infections caused by multidrug-resistant strains increase morbidity and mortality in hospitalized patients, prolong hospitalization, and they have significant negative economic impact. Currently, nosocomial infections are included in a broader concept as healthcare-associated infections. These are caused by a wide variety of pathogens, typically Staphylococci, Enterococci, Pseudomonas aeruginosa, Klebsiella spp., Escherichia coli, etc. Certain fungal agents, e.g., yeasts of Candida genus and aspergilla, are also associated with these infections. The situation is further complicated by the development of resistance in the gram-positive cocci such as staphylococci or enterococci to second-line antibiotics used for the treatment of gramnegative bacteria and resistant gram-positive bacteria. Pathogenesis of mentioned infections plays a key role in forming biofilms on artificial surfaces.

Rapid detection and identification of etiological agents of nosocomial infections and determination of antibiotic susceptibility of pathogens are required for the optimal therapeutic scheme. Chromatographic methods such as high performance liquid chromatography or liquid chromatography-mass spectrometry are universal techniques widely applied to this purpose. However, only capillary electrophoretic techniques are able to determine both, antibiotics and microorganisms, during a single analysis. Differences in the chemotaxonomic fingerprints of the microorganisms can be utilized by matrix-assisted laser desorption/ionization time-of-flight mass spectrometry. In this chapter, we would like to outline an overview of available analytical techniques capable of rapidly identifying and estimating levels of antibiotics as well as microorganisms in real samples with a focus on nosocomial infections.

Malaria is still the most important parasitic disease in the world. Traditional medicines have been used to treat malaria for thousands of years and are the source of artemisinin and quinine derivatives. With the increasing levels of drug resistance, the high cost of artemisinin-based combination therapies and fake antimalarial drugs, traditional medicine has become an important and sustainable source of malaria treatment in endemic areas. The use of herbal medicines believed to have therapeutic properties is becoming increasingly widespread. These remedies are usually taken by patients on their own initiative without prescription from a physician. The discovery and use of natural compounds require a thorough investigation of their safety and efficacy before their release into the market because herbal medicines present the greatest risk of adverse effects relative to all complementary therapies. Nevertheless, natural products have been a major source of new drugs due to the high diversity of their natural compounds that often provide specific biological activities. In this chapter, we review the results achieved in the use of extracts, fractions and compounds obtained from natural sources that have antimalarial efficacy. We also provide a panoramic view of the updated literature on the challenges and strategies associated with contemporary antimalarial natural drug research.

Vaginal infections are one of the most common gynecological problems. The lower female genital tract can be infected by various pathogens such as virus (human immunodeficiency virus, HIV), bacteria (Gardnerella vaginalis), fungi (Candida spp.) or parasites (Trichomonas vaginalis).

The vagina is the local site for the delivery of therapeutic agents. Depending on the antimicrobial agents, different dosage forms have been developed, comprising of douches, creams, ointments, gels, foams, tablets, ovules, rings, tampons and, more recently, vaginal films. Innovative approaches, like encapsulation technologies, have emerged in an attempt to overcome several limitations of the existing systems for vaginal administration of therapeutic agents.

This review explores the antimicrobial agents that can be used for vaginal infections therapy, the various vaginal dosage forms to deliver these therapeutic agents, their advantages and limitations and the novel advances in the area of vaginal drug delivery.

Frontiers in Clinical Drug Research &amp;ndash; Anti infectives is an eBook series that brings updated reviews to readers interested in learning about advances in the development of pharmaceutical agents for the treatment of infectious diseases. The scope of the eBook series covers a range of topics including the chemistry, pharmacology, molecular biology and biochemistry of natural and synthetic drugs employed in the treatment of infectious diseases. Reviews in this series also include research on multi drug resistance and pre-clinical / clinical findings on novel antibiotics, vaccines, antifungal agents and antitubercular agents. Frontiers in Clinical Drug Research &amp;ndash; Anti infectives is a valuable resource for pharmaceutical scientists and postgraduate students seeking updated and critically important information for developing clinical trials and devising research plans in the field of anti-infective drug discovery and epidemiology. The second volume of this series features reviews that cover a variety of topics including: -Identification of nosocomial pathogens and antimicrobials using phenotypic techniques -Topical antimicrobials -Anti-infective drug safety -Antimicrobial resistance &amp;hellip; and much more.