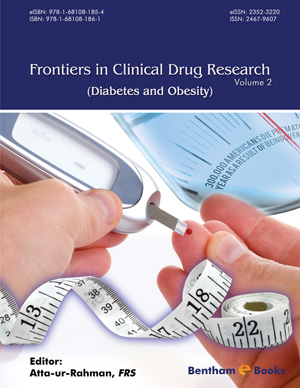 The Current, Emerging and Future Medications for Type 2 Diabetes and Obesity

Overweight and obesity are risk factors for type 2 diabetes, and they also influence the overall prognosis. Almost 90 % of type 2 diabetic subjects are overweight and more than half are obese. Type 2 diabetes is a progressive metabolic disorder conferring an increased risk of cardiovascular comorbidities, including hypertension, coronary artery disease and stroke. The availability of several different classes of antidiabetic drugs in the last few years has increased the number of choices for physicians. The aim of these therapies is to reduce and maintain glucose concentrations and thereby prevent development of complications. When choosing between different antidiabetic drugs attention should be paid to their effect on body weight too.

It is well established that kidneys play a major role to the homoeostasis of glucose at the level of production as well as at the level of absorption. Usually, the majority of the glucose amount that inserts the kidney’s circulation is reabsorbed in the tubular system maintaining in this way a stable glucose level in the plasma. However, in some situations, when the kidneys are not able to reabsorb the whole amount of glucose, the excess glucose is excreted in urine. The last situation is called glycosuria. Sodium-coupled glucose transporters (SGLTs), especially SGLT2, have a key role to the glucose reabsorption in the tubular system and recently have been recognized as a target for the development of a new category of antidiabetic agents. A lot of clinical studies with agents that inhibit SGLT2 showed a favorable effect to plasma glucose levels as well as to body weight. Urinary tract infections are the more important adverse event of this category of antidiabetic agents without any significant implications.

Osteocalcin Plays as an Endocrine Hormone in Glucose Metabolism

The number of patients with diabetes mellitus and osteoporosis are rapidly increasing especially in industrialized countries. Accumulating evidence shows that diabetes and osteoporotic fractures are associated with each other. Patients with type 2 diabetes have a higher risk of fractures independent of bone mineral density compared to healthy subjects. Several key endocrine factors in glucose metabolism such as insulin and adiponectin are shown to regulate osteoblastogenesis and bone turnover. On the other hand, an excellent study using genetic mutant mice models previously demonstrated that osteocalcin, one of the osteoblast-specific proteins, has a hormonal function. Osteocalcin increases the expression of insulin in pancreatic -cells as well as adiponectin in adipocytes, resulting in preventing diabetes mellitus. Furthermore, the insulin signaling in osteoblasts is reported to regulate osteocalcin activity as well as peripheral adiposity and glucose metabolism. Also, several clinical studies showed that serum osteocalcin was inversely associated with blood glucose and visceral fat mass and positively with serum adiponectin levels, parameters of insulin secretion and its sensitivity in humans. Altogether, these experimental and clinical findings suggest that bone metabolism and glucose homeostasis are associated with each other through the action of osteocalcin. These findings are reviewed herein.

Emerging Therapeutic Agents for the Treatment of Type 2 Diabetes Mellitus

The worldwide epidemic of type 2 diabetes (T2D) and the limitations of currently available agents for its treatment have fueled the quest for new therapeutic agents and targets for the treatment of this incurable disease. Despite the availability of various pharmacologic agents, the treatment of patients with type 2 diabetes mellitus remains suboptimal and currently available therapies do not significantly improve β-cell function. Available therapies for diabetes are burdened by side-effects, and they do not adequately address the multiple defects in glucose homeostasis thought to play key roles in the pathophysiology of T2D. Most of the current therapies for T2D were developed in the absence of defined molecular targets. Intensive molecular research and the better understanding of its pathophysiology of T2D have led to the expansion of pharmacologic repertoire to target novel physiologic mechanisms. These drugs differ from established therapies in their mechanisms of action and molecular targets and hence complement them. Incretin-based therapies are a prime example of such novel agents and constitute a priced addition to the pharmacologic inventory of T2D. SGLT2 inhibitors, the latest addition to the T2D treatment has a unique glucose lowering mechanism and also contributes to weight loss. Emerging new molecules, which hold promise for the treatment of T2D include glucokinase activators, dual PPAR α/γ agonists, G protein-coupled receptor 119 agonists, interleukin-1 β inhibitors, protein tyrosine phosphatase 1B inhibitors, gluconeogenesis inhibitors, glycogen synthase kinase-3 inhibitors and 11 β-hydroxysteroid dehydrogenase type 1 inhibitors. QNEXA and lorcaserin are experimental molecules being tried to induce weight loss and also have the potential to reduce blood glucose levels. Stem cell therapies are being explored as a new potential treatment for T2D. Bariatric and metabolic surgeries are also being pursued as therapeutic options for T2D. Expectations from these new therapies in the pipeline for diabetes are very high, and they may fill the gap in the unmet needs of diabetes management. These emerging innovative therapeutic modalities are the focus of discussion in this review.

The dramatic rise in the prevalence of obesity and diabetes is associated with increased mortality, morbidity as well as public health care costs worldwide. The need for new effective and long-lasting drugs is urgent. Recent research has focused on the role of incretin in the maintenance of glucose homeostasis through their actions on both α- and β- cell function. Moreover, increased knowledge of the pathophysiology of diabetes has contributed to the development of novel drugs, including injectable glucagon-like peptide-1 (GLP-1) mimetics, and oral dipeptidyl peptidase-4 (DPP-4) inhibitors. GLP-1 agonists mimic the effect of this incretin, whereas DPP-4 inhibitors prevent the inactivation of the endogenously released hormone. GLP-1 appears to be involved in both peripheral and central pathways mediating satiety. Clinical trials have shown that two GLP-1 receptor agonists exenatide and liraglutide have a weight-lowering potential in non-diabetic obese individuals. Furthermore, they may also hold a potential in preventing diabetes as compared to other weight loss agents. Both agents offer an effective alternative to the currently available hypoglycaemic drugs but further evaluation is needed to confirm their clinical roles and safety. The purpose of this review is to summarize the background of the incretin, and the roles and side effects of the GLP-1 agonists and DPP-4 inhibitors in clinical trials. In addition, up-to-date literature on GLP-1 agonists and DPP-4 inhibitors based clinical therapies will be summarized with a special mention of their weightlowering properties. In conclusion, the incretin impairment, which seems to exist in both obesity and diabetes, may link these two pathologies and underlines the potential of incretin based therapies in the prevention and treatment of obesity and diabetes.

New and Promising Drugs for Obesity

As the obesity epidemic continues, there is demand for more potent and with less side effects anti-obesity drugs. Serotonin is widely- known to participate in the process of satiety. A novel drug that has been associated with serotonin, has been FDA approved in 2012 for the treatment of obesity and is called lorcaserin. It acts as a selective 5-HT2C agonist on pro-opiomelanocortin neurons, thus inducing alpha- melanocyte stimulating hormone (alpha-MSH) and thereby, decreasing appetite. Bupropion also stimulates pro-opiomelanocortin neurons in the hypothalamus resulting in an anorexigenic effect. The combination of phentermine and extended-release topiramate has recently gained approval for the treatment of obesity by the FDA. Phentermine stimulates the release of noradrenaline, dopamine, and serotonin, in a non-selective manner. Phentermine has already been tried as a short-term therapy for obesity, while topiramate, a drug used for the treatment of epilepsy, has been proposed as an anti-obesity drug, based on remarks of weight loss among patients treated with this anticonvulsant drug. Besides, it has been documented that “glucagon-like peptide 1” (GLP-1), and glucagon, together with oxyntomodulin (OXM) have the potential to produce brown adipose tissue (BAT) thermogenesis by means of a centrally involved sympathetic pathway. As the use of “GLP-1 receptor agonists” for treating type 2 diabetic patients has become widespread, this category of drugs could probably be efficacious in combating obesity in the near future. In fact, exanetide and liraglutide have been recently FDA approved as anti-obesity drugs. Orlistat together with cetilistat are gastrointestinal and pancreatic lipase inhibitors, which result in reduced fat absorption, but cetilistat is suggested to have better tolerability than orlistat. Recent data has reported the existence of a new class of neuropeptides, called orexins or hypocretins, which are produced in the hypothalamus and whose actions are mediated by two types of receptors: OX1R and OX2R. More specifically, the orexinergic neurons have been located exclusively in cells in the lateral, dorsomedial and perifornical areas of the hypothalamus. Despite this highly specific anatomical origin, the orexinergic neurons are projected widely into a number of brainstem, cortical and limbic regions. Besides, targeting peroxisome proliferator activated-receptor gamma, seems to be a promising pathway to control the obesity epidemic in the future. Other novel drugs, which have been explored and seem promising against obesity and therefore are worth mentioning are beloranib, velerenib and tesofensine. Tesofensine possesses inhibitory properties regarding serotonin, dopamine and mainly noradrenaline. Velneperit is an oral, small-molecule NPY5 receptor antagonist, which acts centrally and is given once daily. Neuropeptide Y (NPY), an appetite-stimulating substance, has a key -role in homeostasis of energy balance, especially under food deprivation conditions. Velneperit counteracts elevated NPY levels, thus producing sustained weight loss. Beloranib, “an analog of the natural substance fumagillin, is a methionine amino peptidase 2 inhibitor (MetAP2)”. The ability of “MetAP2 to suppress extracellular regulated kinases 1 and 2 (ERK1/2)” is thought to act as the major the mechanism associated with beloranib’s potential against obesity. Brown adipose tissue possesses too many vessels. It is by means of these precursor cells that are present in vessels, that adipogenesis is controlled by angiogenesis. Adipose-derived precursor cells produce peptides, such as “vascular endothelial growth factor (VEGF)”, leptin, resistin, and visfatin, and matrix metalloproteinases (MMPs), which are implicated in and promote angiogenesis. Therefore, new targets such as VEGF, matrix- metalloproteinases and sirtuin receptors are currently being investigated, with regards to their anti-obesity potential.

Frontiers in Clinical Drug Research &amp;amp;ndash; Diabetes and Obesity is an eBook series that brings updated reviews to readers interested in advances in the development of pharmaceutical agents for the treatment of two metabolic diseases &amp;amp;ndash; diabetes and obesity. The scope of the eBook series covers a range of topics including the medicinal chemistry, pharmacology, molecular biology and biochemistry of natural and synthetic drugs affecting endocrine and metabolic processes linked with diabetes and obesity. Reviews in this series also include research on specific receptor targets and pre-clinical / clinical findings on novel pharmaceutical agents. Frontiers in Clinical Drug Research &amp;amp;ndash; Diabetes and Obesity is a valuable resource for pharmaceutical scientists and postgraduate students seeking updated and critically important information for developing clinical trials and devising research plans in the field of diabetes and obesity research. The second volume of this series features 7 reviews presenting updates on hormones and several classes of drugs: -Osteocalcin action in glucose metabolism -Sodium-glucose co-transporter 2 (SGLT2) inhibitors -Glucagon-like peptide-1 (GLP-1) mimetics -Dipeptidyl peptidase 4 (DPP-4) inhibitors -New drugs in clinical trial and commercial phases