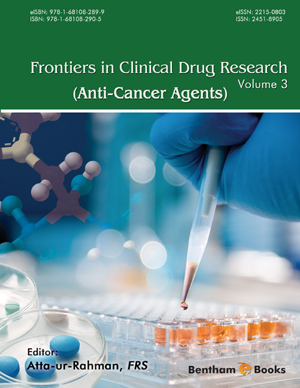 Since its discovery several decades ago, the Epidermal Growth Factor Receptor (EGFR) has become one of the most extensively studies receptor tyrosine kinases. However, despite continued insight into the cancer promoting properties of the EGFR and its downstream signalling substrates, clinical use of agents targeting the EGFR continue to yield modest outcomes. Clinically, approved anti-EGFR therapeutics can successfully inhibit receptor activation. However major tumour regression is observed in only 10-30% of advanced unselected cancer patients, with most patients showing no therapeutic benefit. Furthermore, those who initially respond commonly relapse presenting with reoccurrence of tumours that are frequently resistant to the original therapy. In addition, the standard course of treatment of such agents is estimated to cost between “US $15,000-80,000/patient” for an improved overall survival of only 1-2 months. Therefore, it is both medically and financially critical to determine the true molecular mechanisms of tumour resistance, and how it can be overcome. In these 2 back-to-back chapters, we will provide an overview of the progress made in targeting the EGFR and discuss the challenges presented by the numerous molecular mechanisms currently identified, leading to overall refractory outcomes to anti-EGFR therapeutics. In this chapter (Part I) we will specifically focus on the resistance mechanisms driven by alterations in ligand and receptors of the EGFR family and cross-talk between EGFR receptors and non-EGFR family members.

Tumor resistance to agents targeting the Epidermal Growth Factor Receptor (EGFR) is common, and well recognised as a major challenge to successful clinical outcome, because patients often present with tumors that contain pre-existing intrinsic resistance mechanisms to current EGFR inhibitors, which ultimately has no therapeutic benefit. Furthermore, patients who initially respond to these therapies commonly relapse, presenting with new tumors that have acquired resistance to the original therapy. Substantial translational and clinical research has been undertaken in order to understand, and more importantly overcome, the molecular initiators of both intrinsic and acquired tumor resistance. However, despite a multitude of cost and effort in gaining greater understanding of the molecular mechanisms that drive tumor resistance, very little has translated into clinical practice and management of patients. In these 2 back-to-back chapters, we will provide an overview of the progress made in targeting the EGFR and discuss the challenges presented by the numerous molecular mechanisms currently identified, leading to overall refractory outcomes to anti-EGFR therapeutics. In this chapter (Part II) we will specifically focus on the resistance mechanisms mediated by alterations in substrates downstream of the EGFR and review other intracellular mechanisms that mediate both sensitivity and resistance outcomes to anti-EGFR agents.

Chemotherapeutic, Immunologic, and Molecularly Targeted Therapy for the Treatment of Advanced Melanoma

Over the past several decades, the incidence of melanoma has increased. Although surgery remains the primary treatment modality for localized early-stage lesions, melanoma is often diagnosed following locoregional and distant disease spread. Prognosis for advanced stage disease is dismal as one would expect; however, nowadays, the myriad of systemic therapies have allowed for improvements in disease free and overall survival. Such systemic treatment approaches include chemotherapy, immunotherapy, and molecularly targeted agents. Since the time of the approval of dacarbazine by the Food and Drug Administration for the treatment of metastatic melanoma in 1975, other agents have gained approval including interleukin-2, immune checkpoint inhibitors such as ipilimumab (anti-CTLA-4), and others. More recently, studies suggest that combination regimens of the aforementioned approaches may further improve outcomes when compared to monotherapy. Herein, the authors provide an up-to-date comprehensive review on the chemotherapeutic, immunologic, and molecularly targeted therapy approaches to the treatment of advanced melanoma.

Targeting the Warburg Effect for Cancer Therapy: A Long and Winding Road

In the 1920s, Otto Warburg, one of the leading biochemists of the 20th century, uncovered a striking phenotype of cancer cells: their increased dependence on lactic acid fermentation for energy production compared to that of the normal cells from which they derived. Warburg viewed this metabolic particularity of cancer cells, which came to be known as the Warburg effect, as a driving force in carcinogenesis. This perception suggested a novel path for cancer therapy, a strategy that Warburg himself proposed and defended with passion to his death. However, for many decades, both his metabolic theory of cancer and suggested therapeutic approach were essentially ignored by cancer researchers, who were mostly focused on the genetic basis of the disease and on the intricacies of the pathways known to promote cellular proliferation, differentiation and death. Still, thanks to the combined efforts of those who chose to pursue Warburg’s line of research, experimental evidence supporting and extending Warburg´s findings on the metabolism of cancer cells accumulated. In the 1980s, 18F-deoxyglucose positron emission tomography (18FDG–PET) was implemented in the clinic. This metabolic imaging technique, which is based on the avidity of cancer cells for glucose, represents, to this day, the only successful exploitation of the Warburg effect for medical purposes. The wide success of 18FDG–PET in the diagnosis and staging of tumors is among the factors most responsible for renewing interest in the central carbon metabolism of cancer cells. This renewed interest was further boosted by the discovery of multiple links between central carbon metabolism and cellular proliferation, differentiation and death and culminated in the recent classification, by Weinberg and Hanahan, of tumor metabolism as an emerging cancer hallmark. Tremendous research effort is now being devoted into a more detailed and comprehensive elucidation of the metabolic rewiring that accompanies neoplastic transformation and, unsurprisingly, targeting the metabolic peculiarities of tumors has become a hot topic in drug discovery. This chapter summarizes past and current efforts at targeting the Warburg effect for selective cancer therapies.

Follicular lymphoma (FL) is the most frequent indolent non-Hodgkin lymphoma. Therapeutic strategies vary from withholding treatment to aggressive chemoimmunotherapy regimes, and stem cell transplantation, depending on the stage and risk stratification at diagnosis. A prominent role of the microenvironment in FLcell survival and lymphomagenesis has been brought to light and consequently the manipulation of the FL-cell niche is progressively becoming an important therapeutic tool in FL. Chemotherapy agents are no longer under the spotlight, leaving the main role to immunotherapeutic strategies and targeted therapy that aim towards disease control with minimal side-effects and sequelae. Immunotherapy with monoclonal antibodies, radioimmunotherapy and vaccines, has resulted in increased response rates and survival in FL patients.

The following chapter will summarize FL biology and conventional treatment with immunochemotherapy, with a final section focusing specifically on novel immunotherapy strategies (active and passive) for the treatment of FL.

Epigenetics is increasingly recognized to play an important role in tumorigenesis. The epigenome encompasses a multitude of elements that regulate gene expression, including DNA methylation, histone modification, microRNA, and more recently, non-coding RNA. Aberrant regulation of the epigenome has been implicated in altered gene expression and function, which contribute to cancer development and progression via the promotion of cellular transformation, metastatic spread, and drug resistance. Emerging evidence indicates that the activities of key epigenetic regulators including DNA methyltransferases and histone modification enzymes are sensitive to cellular metabolism. The efficiency of these metabolic enzymes depends on the availability of substrates and/or co-factors that can be profoundly altered in cancer. Mutations in metabolic enzymes in cancer also generate oncometabolites that can lead to the dysfunction of DNA and histone demethylases. Conversely, through mediating aberrant expression of genes that are involved in cellular metabolism, epigenetic mechanisms could contribute to metabolic rewiring in cancer to confer a growth advantage to cancer cells. Understanding this cross-talk between epigenetics and cancer cell metabolism may unravel novel therapeutic opportunities. In this chapter, we will review recent discoveries linking epigenetics and cancer cell metabolism, their implications in oncogenesis, and highlight potential approaches to target these cancerspecific abnormities therapeutically.

Apoptosis (called as programmed cell death) is vital for maintaining homeostatic balance between cell survival/cell deaths in metazoan cells. Apoptosis is regulated through extrinsic (or receptor mediated) and intrinsic (or mitochondria mediated) pathways. The pro-apoptotic proteins (e.g. Bax, Bak, Bad, Bcl-Xs, Bid, Bik, Bim and Hrk) and the anti-apoptotic proteins (e.g. Bcl-2, Bcl-XL, Bcl-W, Bfl-1 and Mcl-1) are crucial to control the apoptotic pathways. Dysfunctions of apoptosis pathways are implicated in cancer as defects in these pathways not only promote tumorigenesis but also confer resistance to cancer cells to most conventional chemotherapies as well as radiotherapy. The apoptosis occurs by imbalanced proapoptotic and anti-apoptotic protein levels, impaired or reduced death receptor signalling and caspase function. Hence, targeting apoptosis pathways is considered as an attractive strategy for therapeutic intervention in cancer. The past decade recorded tremendous advances in this area especially small molecular intervention of apoptosis pathways for cancer treatment which resulted in several compounds under clinical development. This chapter reviews the current progressions in the development of bioactive molecules targeting apoptotic pathways with special emphasis on small molecular anticancer drugs under clinical trials. Some excellent examples are; nutlins, MI-888, MI-219 and SM-164 which target MDM2, ABT-263, AT-406 and GX15- 070MS which target Bcl-2 family of proteins, birinapant, GDC-0917, HGS-1029 and LCL-161 which target IAPs (inhibitors of apoptotic proteins). The content of this chapter will be enlightening the readers in academic and research to update their knowledge on the anticancer drugs especially target proteins responsible for apoptosis.

Frontiers in Clinical Drug Research - Anti-Cancer Agents is an eBook series intended for pharmaceutical scientists, postgraduate students and researchers seeking updated and critical information for developing clinical trials and devising research plans in anti-cancer research. Reviews in each volume are written by experts in medical oncology and clinical trials research and compile the latest information available on special topics of interest to oncology researchers. The third volume of the eBook series begins with a detailed review of the molecular biology of inhibitors that target EGF-family receptors. This review is divided into two parts that covers extracellular and intracellular molecules. Other reviews cover targeted therapies for cancers such as melanoma, follicular lymphoma and topics such as cancer immunotherapy, apoptosis targeting and the Warburg Effect.