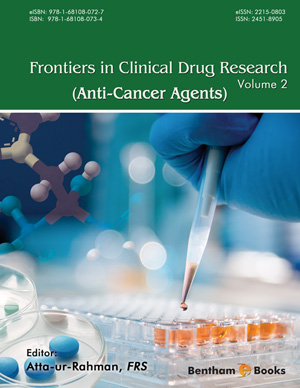 Cancer cells have the potential to proliferate at an abnormal rate and spread to the whole body. To combat cancer, many therapeutic strategies using small drug molecules have been explored, but their therapeutic effects are generally low and they often have harmful side effects. Therefore, to achieve maximum drug activity with minimal side effects, many attempts have been made to delivery anticancer drugs using macromolecular formulations. Recently, dendrimers have been used as drug delivery vehicles for anticancer drugs. A dendrimer is a synthetic macromolecule with a unique structure. Dendrimers have inner space and multiple terminal groups for drug encapsulation and drug conjugation. In addition, imaging probes and targeting ligands can be attached to the dendrimer to prepare a multifunctional nanocarrier. Thus, dendrimers are potent platforms for cancer therapy. In this article, we focused on the application of dendrimers for delivery of anticancer therapeutics. Also, we have discussed the mode of attachment between drug and dendrimer and their anti-cancer activity in vivo and in vitro on the basis of recent research.

Cutaneous squamous cell carcinoma (SCC) is the second most common type of non-melanoma skin cancer after basal cell carcinoma, and its incidence is continuously increasing. Although most cutaneous SCCs are localized early-stage tumors, regional lymph node and distant metastases can occasionally develop. The standard treatment of early disease is surgical excision, and shows good prognosis. In contrast, the treatment of advanced disease, such as unresectable or metastatic disease, is difficult, and there are currently no established standard treatment options, despite it being a potentially life-threatening condition. In the past, the clinical outcomes of various regimens have been investigated, including bleomycin, peplomycin, platinum agents, anthracycline agents, fluoropyrimidines, 13-cis-retinoic acid, and interferon-2a. Several clinical trials have shown favorable responses to these agents; however, these were all limited by a lack of randomization, a small number of enrolled patients, and/or heterogeneous patient populations, resulting in a lack of defined treatment strategies for this disease.

Recent studies have elucidated that the epidermal growth factor receptor (EGFR) is highly expressed in many epithelial tumors, including non-cutaneous SCC of the head and neck and cutaneous SCC, and several agents that target human EGFR, such as gefitinib, cetuximab, and erlotinib, have shown preliminary evidence of activity in phase II clinical trials and case series reports.

This review looks mainly at the previously published clinical trials in an attempt to assess the effectiveness of the various modalities used in the treatment of advanced cutaneous SCC, and aims to provide an overview of the current evidence base and to highlight the areas in need of further research. Only appropriate clinical trials that are well randomized and include adequate patient numbers with well-defined endpoints may prove the clinical efficacy of these promising treatment options.

The development of new pharmacodynamic biomarkers has greatly increased the information content of clinical trials, and made possible the construction of pharmacokinetic/pharmacodynamic (PK-PD) models. A population PK-PD model, in conjunction with a disease model, can then be used to simulate clinical trials in silico. In the case of oncology, the disease model must describe the cancer cell cycle, and such aspects of tumour biology as growth, invasion, metastasis, angiogenesis, and interactions of tumour cells with the immune response. Such models of tumour growth and its response to drug treatment can be used in conjunction with databases of drug PK and PD parameters and with databases of biomarkers, to ask the question: for a tumour with a given biomarker expression profile, what treatment protocol is likely to be most effective? Various treatment options can then be modelled, and the one predicted to be most active selected for clinical evaluation. Since, in practice, many of the tumour growth parameters are still unknown, a Bayesian approach is required: prior assumptions are made, based upon preclinical data and historical precedent. The course of treatment, based upon these prior assumptions, is predicted, compared with the clinical outcome, and the difference fed back to drive model adjustments. The assumptions of the model are thus progressively refined - the system learns from experience. A Bayesian model can be used to devise optimal control strategies for chronic disease. A frequent cause of cancer treatment failure is the rapid development of acquired drug resistance. In silico clinical trials that incorporate the techniques of evolutionary dynamics can be used to predict the incidence of drug resistance, including multi-drug resistance, so that emergence of resistant clones can be minimized and delayed. In due course, the actual clinical outcome can then be compared with the predictions. We review the literature on the use of Bayesian systems in oncology, and discuss their application to development strategies for new drugs, and to developing personalised medicine approaches in oncology.

HSP90 was the first molecular target to inhibit the interaction of this heat shock protein (HSP) with client proteins in cancer cells and tissues. The HSP90 inhibition was attempted to liberate from this chaperone the oncogenic fusion proteins, mutated and activated serine/threonine protein kinases, tyrosine kinases, as well as transcription factors with oncogenic activity, in this manner, the free proteins could be recognized by the proteasome system to be degraded. We should remember here that many HSP family members are overexpressed in different kinds of cancer tissues, these molecules act as chaperones of tumorigenesis. In cancer patients, the first generation of HSP90 inhibitors showed elevated levels of toxicity, which was partially solved with the second-generation of inhibitors that could be intravenously delivered. With the arrival of the third-generation drugs that could be orally administrated, anticancer activities were achieved in clinical trials, however, the results were not as successful as expected due to: 1) limited anti-tumor efficacy; 2) acquisition of drug resistance; 3) difficulty to identify the client protein(s) specifically degraded in response to drug administration. The main problem is the redundancy of chaperones that the cancer cells have, in fact during HSP90 or HSP70 inhibition the heat shock factor (HSF1) could be liberated increasing the levels of other HSPs and in addition, HSF1 can by itself act as an inducer of the multidrug resistance MDR response and is also implicated in HER2 and hormonal responses. These difficulties, rather than decreasing the interest of having the HSPs as molecular targets, are increasing the exploration of new ways to interfere with several HSPs simultaneously and using HSP inhibitors with more “conventional” anticancer drugs. In this article we review, in addition to HSP90, HSP27, HSP70, and HSP60 as targets for anticancer therapy.

Apoptosis is a tightly regulated cellular mechanism that is frequently dysregulated in many human malignancies. Inhibitor of apoptosis (IAP) proteins are preferentially expressed in many cancers and are attractive therapeutic targets. One of the most promising strategies to block IAPs is with small-molecule IAP antagonists. In the past decade, intense research efforts have been dedicated to the development of this novel class of drugs. While currently there are no FDA approved IAP inhibitors, a number of small-molecule inhibitors have moved into clinical trials either as single agents or in combination with existing anticancer drugs. Both monovalent and bivalent IAP inhibitors have been reported. These small-molecule inhibitors have the potential to bring exciting new treatment options to overcome apoptotic resistance for anticancer therapy. However, due to the dynamic nature of IAPs and their involvement in cell signaling, there are still challenges that need to be addressed to optimize their efficacy and incorporate them into eventual clinical regimens. This chapter reviews the biological mechanisms of IAPs as well as provides an update of the recent advances, clinical challenges and potential opportunities for small-molecule IAP inhibitors, particularly SMAC mimetics and survivin antagonists, in anticancer therapeutics.

Currently, the main treatments available for cancer include surgery, biological therapy, radiation and chemotherapy. However, these treatments have strong secondary effects on patients, which can prohibit their use. Therefore, the search for alternative treatments is a current challenge for scientists. Several studies have identified compounds from plants that exhibit biological properties compatible with the desired activity of anti-neoplastic drugs. Natural products are thought to be more compatible with the human body and cause fewer side effects. Furthermore, substances present in fruits, vegetables and herbal essential oils have demonstrated important antiproliferative activity, inducing cell and genomic changes favorable for cancer prevention and therapy. Taking into account that the molecular mechanisms by which natural compounds function to prevent cancer are not fully understood and that molecular targets can be important tools for evaluating their effectiveness, this chapter aims to present and discuss potential active compounds as possible anti-cancer agents.

Ehrlich invented chemotherapy in 1909 with a simple rationale: Chemicals could cure infection by hitting targets in microbes that didn’t exist in hosts. Arsenicals, sulfa drugs, and antibiotics lent credibility to the notion. But now we know it’s oversimplified. Immune and inflammatory responses are essential to curing infection, and continued treatment with any single chemical leads inevitably to resistance. Cancer is more challenging than infection. Host and cancer cells are similar, host responses to cancer are less vigorous than those to microbes, and drugs that inhibit cell division tend not only to suppress inflammation and immunity, but also to erode gastrointestinal mucosa causing nausea, vomiting, and malnutrition. Together these side-effects predispose to infection, and a desperate dilemma: Should the patient die of cancer or it’s treatment? Despite long odds, chemicals remain the only hope for control of disseminated cancer. To realize this hope, however, we must enact a sea-change in our thinking. Rather than searching for new magic bullets, we must focus on overcoming tumor defenses, precluding resistance to treatment, preserving and enhancing host anticancer responses, minimizing toxic side effects, and inspiring patients and their physicians to engage in realistic dialogue about life and death. Combining effective drugs and drug combinations with nutritional manipulations, metabolic modifications, mind-body interventions, and philosophic contemplations holds the most promise for realizing this goal.

Frontiers in Clinical Drug Research - Anti-Cancer Agents should prove to be a valuable resource for pharmaceutical scientists and postgraduate students seeking updated and critical information for developing clinical trials and devising research plans in the field. The chapters featured in each volume are written by leading experts in oncology and clinical pharmacology. The eBook series is essential reading for all scientists involved in clinical drug research who wish to keep abreast of rapid and important developments in the development of anti-cancer agents. The contents of this volume include reviews on dendrimers for anti-cancer drug delivery, treatment methods for advanced cutaneous squamous cell carcinoma, targeting heat shock proteins for cancer treatment, Bayesian systems for optimizing treatment protocols in oncology and much more.