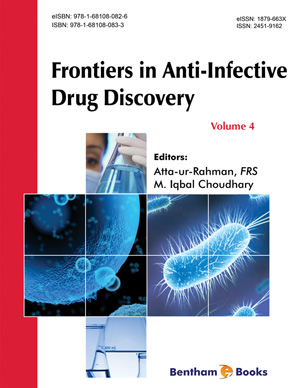 Resistance to FDA Licensed Anti-Neuraminidase Drugs Used for Flu Treatment in the Americas: An Overview of the Incidence of Resistant-Strains of Seasonal and Pandemic Influenza Viruses from 2004 to 2014

Influenza A and B viruses are RNA viruses that present neuraminidase as one of their envelope-inserted glycoproteins. These viruses, because of their complexity and high mutation rates, exhibit high prevalence among human beings and are causal agents of annual flu epidemics. They are responsible for significant morbidity and mortality and cause 250,000 to 500,000 deaths worldwide per year, especially among the elderly, children and patients presenting respiratory, renal and cardiac diseases. Through the centuries, influenza A viruses have been identified as agents of flu pandemics. During infection, the viral neuraminidase plays a critical role in the virus particles dissemination by releasing the terminal sialic acid residues on the cytoplasmatic membrane by cleaving α-2,3 and α-2,6 ketosidic linkages, which involves a chair-boat conformational change. Neuraminidase presents exo-glycohydrolase activity, exhibiting an active site that is highly conserved in nine of the antigenic neuraminidase subtypes of influenza A viruses. The neuramidase active site exhibits a central rigid catalytic structure with 19 highly conserved amino acid residues and is thus considered to be an interesting attractive target for the design of anti-influenza drugs. Zanamivir and oseltamivir, two anti-influenza neuraminidase drugs, were introduced in 1999. However, since the anti-neuraminidase drugs were introduced, the appearance of conformational changes responsible for the development of clinically relevant resistance has become a critical topic. Resistance of influenza A H1N1 viruses to oseltamivir was first observed in 2001, and the circulation of oseltamivir-resistant and zanamivir-resistant samples of influenza A (H1N1 and H3N2) and B viruses have already been observed. The most commonly reported cases of recent oseltamivirresistant viruses present a 275 mutation (H275Y) on the neuraminidase (NA) molecule, a substitution that is known to be responsible for high levels of resistance only to oseltamivir; other point mutations have been observed to confer resistance to zanamivir and peramivir. The aim of this chapter is to report the presence of mutations that induce resistance to anti-neuraminidase drugs that have been licensed by the FDA for flu treatment in the ten last years in the Americas.

Phenothiazines and derivative compounds are tricyclic drugs used in psychiatric treatments as antidepressants, anxiolytics and antipsychotics. Among their different biological activities they have potent antifungal, antibacterial and antiplasmid activity. Currently, there are numerous phenothiazines derivatives; they all share a common chemical structure: they present three rings, two of them being benzene joined by a sulfur atom and a nitrogen atom. A slight variation in the substitution pattern of these drugs can cause clear differences in their pharmacological activities. One of the most important properties they have is their liability to oxidation by many oxidizing agents.

We have studied the effect of some phenothiazines and derivative compounds upon Trypanosoma cruzi, the etiological agent of Chagas disease. The drugs currently used for the treatment of this disease have high toxicity and parasites often cause resistance. Phenothiazines have been proved to inhibit trypanothione reductase, an enzyme present in these tripanosomatides that is essential for their redox defense system and that has been widely identified as a drug target. These tricyclic drugs also had other trypanocidal effects upon T. cruzi in culture: anticalmodulin action, mitochondrial disruption and cell membrane disorganization. These drugs were also effective for the treatment of mice infected with different T. cruzi strains, since they modified the natural evolution of the infection; noteworthy is the fact that cardiac function and survival of treated animals were not different from non-infected controls. Phenothiazines and derivative compounds should therefore be considered as promising trypanocidal agents for the treatment of Chagas disease.

There is an urgent need to explore new targets and develop novel therapeutics due to the emergence of multi-drug resistant bacteria. Recently, selected members of Carbohydrate Esterase family 4 namely peptidoglycan and exopolysaccharide de-N-acetylases from bacterial pathogens have been identified as promising antibacterial drug targets. This chapter highlights the state of the art in their physiological roles, biochemical characterization, regulation, localization, structure determination and mechanism of action. Initial efforts and strategies that will guide the development of novel inhibitors against bacterial pathogens, including biofilm forming and spore forming ones, are also reviewed.

Targeting RNA with Aminoglycosides: Current Improvements in their Synthesis and Biological Activity

RNA has been considered during a long time as an intermediate between two biomolecules of special relevance in the life: the DNA (an nucleic acid that encodes the genetic instructions in all known living organisms) and proteins (molecules that perform a vast array of functions within living organisms). However, recent discoveries have converted this molecule in the spotlight of biomedical research. To this must be added that scientific community has explored only the tip of the iceberg of potential of RNA-binding drugs as therapeutic agents, except the antibiotics which exert their action by binding to rRNA. In this context, aminoglycoside compounds are a family of natural pseudo-oligosaccharides positively charged, which have been used for a long time as antibiotics that bind ribosomal RNA and whose use has been relegated today for two reasons: their inherent toxicity and the development for bacterial of several resistance mechanisms to those. Nevertheless, these drawbacks are in the way to be solved because several aminoglycosides with lower toxicity and potential to overcome resistance have been discovered in the last decade. Besides, in this period it has been described the possibility of using these compounds as ligands of other RNA targets, such as HIV-RNA.

In this chapter, current applications of natural and semi-synthetic aminoglycosides both as antibacterials and as antivirals/HIV as well as their corresponding mechanisms will be discussed.

Drug-resistant bacteria are an important public health concern. They are spreading across the world, increasing mortality and morbidity rates. The misuse of antimicrobials has been central to this increase. It is therefore necessary to implement improvement measures. The Centers for Disease Control and Prevention (CDC) recommends four core actions to fight back against antibiotic resistance: Antimicrobial Stewardship Programs (ASPs); prevention of infections; tracking of antibiotic resistance; and development of new drugs and diagnostic test. In recent years very few antimicrobials have been commercialized, so several initiatives have raised in order to promote antibiotic research like Generating Antibiotics Incentives Now (GAIN) act, Innovative Medicines Initiative New Drugs for Bad Bugs (IMI ND4BB) or 10 x ’20 Initiative to develop 10 new, safe and effective antibiotics by 2020. Thanks to these initiatives, some new antibiotics have been approved recently: Dalbavancin, Tedizolid or Oritavancin, all indicated in the treatment of acute bacterial skin and skin structure infections (ABSSSI), mainly caused by Gram positive bacteria of genus Streptococcus or Staphylococcus. The landscape for Gram negative infections does not look so promising, with only a few compounds undergoing clinical trials. Other compounds in pipeline attack different pathways of resistance: aspergillomarasmine A was identified as a potent inhibitor of NDM-1, a metallo-β-lactamase (MBL) which has contributed to the rise of carbapenem resistant Gram-negative bacteria. The slow development of new antimicrobials and its misuse have trigged the current situation of emergence and spread of antibiotic resistance, emptying effective treatment and forcing the use of old antibiotics. This situation makes necessary to develop new strategies in order to overcome resistance to available antibiotics and also perform clinical trials with older drugs to improve their safety profile. In addition to actions that ensure the appropriate use of antibiotics.

This eBook series brings updated reviews to readers interested in advances in the development of anti-infective drug design and discovery. The scope of the eBook series covers a range of topics including rational drug design and drug discovery, medicinal chemistry, in-silico drug design, combinatorial chemistry, high-throughput screening, drug targets, recent important patents, and structure-activity relationships. Frontiers in Anti-Infective Drug Discovery is a valuable resource for pharmaceutical scientists and post-graduate students seeking updated and critically important information for developing clinical trials and devising research plans in this field. The fourth volume of this series features 5 chapters that cover the following topics: - An overview of the incidence of neuraminadase resistance in influenza viruses in the Americas from 2004 to 2014 - Phenothiazines and derivative compounds for treating Trypanosoma cruzi infections - New antibacterial drug targets such as polysaccharide deacetylases - Improvements in aminoglycoside synthesis and biological activity (including RNA targeting) - A review of new chemotherapeutic agents against common infections.