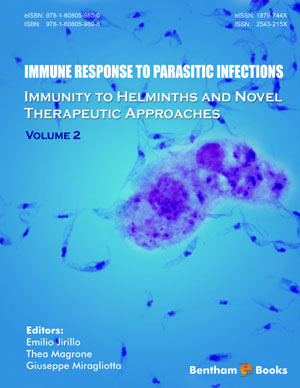 Neuroendocrine Control of the Immune Response During Helminth Infections

The physiological interactions during the course of the immune response to helminths are complex. As our understanding of the neuroendocrine system grows, it has become increasingly clear that this complex network of neurotransmitters, hormones, and cytokines plays an important role in mediating immunity. Helminths present an especially complex relationship between parasites and their physiological systems, with neuro and hormone dependent host factors such as sex, age, and physiological status that correlate with parasite success. On top of the effect that this particular type of parasite may have on the invaded host, recent experimental evidence suggests that helminth parasites not only actively evade immune response, but are also able to exploit the hormonal microenvironment within their host to favor their establishment, growth and reproduction. Additionally, the close interaction of the worm with the host’s homeostatic systems, the molecules produced by them, and the activation of immune mediated mechanisms to eliminate it, activate a complex neuroendocrine network, that produces strong behavioral changes in the infected host. Understanding how the host neuroendocrine system can, under certain circumstances, favor the establishment of a parasitic infection, opens interesting perspectives into the host parasite relationship. This chapter focuses on the hostparasite neuroendocrine network activated by parasitic worm infections.

The Immune Response During Toxocariosis by Toxocara Canis

Toxocara canis is a nematode with a biological cycle that includes a definitive canine host and diverse paratenic hosts. These hosts include humans, rats, rabbits, birds, and pigs. This parasite is the causal agent for toxocariosis, which is an important parasitic infection in tropical and subtropical regions. Infection of BALB/c mice with T. canis elicited a Th2 response; however, this infection did not significantly alter the Th1 immune response. An appropriate animal model must primarily imitate the human host, the parasite’s responses to the human host or the way that both the host and parasite interact. The knowledge of the immunological response in toxocariosis is relevant for understanding the protective mechanisms developed by the host against the parasite and the immune modulation effect on these mechanisms by the larvae. These parasite-host interactions could culminate in the success of the infection, the development of the disease, the destruction of the parasite or the interruption of its pathogenic mechanisms. This knowledge allows to design the methods of immunodiagnosis based on the detection of specific antibodies against parasite antigens and/or the detection of the parasites’ antigens. Finally, the identification of the protective immune response mechanisms could serve in the development of strategies for the prevention, treatment and more adequate management of patients. In this chapter, we review certain aspects of the immunological responses that participate in the infection and in the disease, the relevant aspects of the humoral immunological response for the design of immunodiagnostic methods and for the development of vaccines.

Mechanisms of Immune Modulation by Fasciola Hepatica: The Impact of Innate Immune Cells on the Developing Adaptive Immune Response

Fasciola (F.) hepatica lives for prolonged periods within its host due to its ability to modulate host immune responses. Unlike other helminths, within hours postinfection it drives antigen specific Th2/Treg responses. This polarisation of the host immune response continues throughout all developmental stages within the definitive host. Central to the parasite’s ability to produce such an immune outcome is the secretion of a plethora of molecules that interact with innate immune cells impairing their ability to promote Th1/Th17 responses. This firmly establishes F. hepatica as an important model to examine the anti-inflammatory properties of helminths. In this chapter, we specifically examine the communication between the secreted and shed molecules from F. hepatica and dendritic cells, macrophages and mast cells. In particular, we aim to highlight the impact that this interaction has on the development of Th1/Th17 immune responses. This chapter examines the diverse range of F. hepatica molecules that utilise different immune mechanisms to achieve the same overall outcome, thus ensuring redundancy in the development of Th2/Treg immune responses associated with F. hepatica infection.

Parasite-Mediated Immune Modulation During the Development of Human Cystic Echinococcosis

Cystic echinococcosis (CE) is a neglected zoonosis caused by the larval stage of the cestode Echinococcus granulosus. It represents one of the major health priorities in developing countries and its global prevalence is about three million. E. granulous modulates anti-parasite immunity and persists in infected humans despite the occurrence of detectable parasite-specific humoral and cellular responses. In particular, the up-regulation of the Th2-type response and of anti-inflammatory cytokines production is involved in the chronicity of the infection and in the inhibition of host protective mechanisms. In this chapter, we underline findings about the human immune response during the development of CE and new insights regarding to the ability of E. granulosus to directly modulate and even to exploit the host’s immune system. New knowledge into the host immune response to the parasite will increase our understanding of this parasitic infection and will give the opportunity to design new preventive or therapeutic strategies.

The Immunobiology of Urogenital Schistosomiasis

Schistosoma haematobium, the infectious agent responsible for urogenital schistosomiasis, infects over 112 million people annually in Sub-Saharan Africa alone. Despite a complicated life-cycle within the human host, the vast majority of clinical manifestations occur in response to eggs deposited into the bladder and ureter walls by adult worms. Egg-associated inflammatory lesions feature markedly dysregulated fibrosis responsible for obstructive disease, and urothelial alterations linked to human bladder cancers. Epidemiologic evidence suggests that S. haematobium is responsible for 32 million cases of dysuria, 10 million cases of hydronephrosis, and 150,000 deaths from renal failure annually, making S. haematobium the world’s deadliest schistosome. Despite the fundamental role of urogenital pathology in human disease, few animal models have been able to recreate natural infection. This review gathers the existing body of knowledge regarding the immunological events during S. haematobium infection, and surveys novel S. haematobium infection models to reflect on how we can move forward towards understanding both the pathologic and protective immune responses to the world’s deadliest schistosome.

The Translational Immunology of Trichinellosis: From Rodents to Humans

Trichinellosis is a worldwide zoonosis caused by the parasitic nematodes belonging to the Trichinella genus.

In this review we describe some aspects of the host immunity to the different species of Trichinella in humans, as well as in rodents which are one of the most studied experimental models. The role of humoral (antibodies) and cellular (T cells, mast cells, eosinophils and neutrophils), immune responses to this nematode will be considered in experimental as well as in human infections. Particular attention will be paid on the possibility to exploit such knowledge to improve the diagnostic possibilities of infection. Immunopathological aspects of infection will also be considered.

Finally, the evasion mechanisms of host immune responses exploited by Trichinella and the vaccination perspectives for control will be elucidated.

Nowadays Anisakis simplex (A.s.) infestation is underestimated and underdiagnosis, as the correlated clinical pictures suggest differential diagnosis of the majority of gastrointestinal internal pathologies and of various symptoms of allergic diseases, including the most severe and potentially fatal form represented by the anaphylactic shock. However we must cope with a pervasive and emerging disease which causes public serious health problems.

A. is a zoonotic disease caused by parasitic nematodes of the marine Anisakidae family; the infection is caused by consuming raw parasitized fish. The experimental data in our possession suggest that A. can determine different kinds of immunopathogenesis, in particular the I, III and IV type. From the immunophlogistic point of view a conspicuous eosinophilic infiltration is realized around the implant site tissue of the A. larva, as a result of the action of chemotactic factors released by T lymphocytes, mast cells, basophils, and also by the same A. It usually does not result into a blood eosinophilia.

Immunomodulation by Parasitic Helminths and its Therapeutic Exploitation

Parasitic worms are able to survive in their mammalian hosts for many years due to their ability to manipulate the immune response by secreting immunomodulatory products. These products differ between species of helminths, but they share common mechanisms of action such as modulation of Toll-like receptor pathways and induction of regulatory immune responses along with pro-inflammatory Th2 responses, what is often termed as a ‘modified Th2 response’. Interestingly, it is increasingly clear that, reflecting the anti-inflammatory actions of such worm-derived immunomodulators, there is an inverse correlation between helminth infection and autoimmune diseases in the developing world. As the decrease in helminth infections due to increased sanitation has correlated with an alarming increase in prevalence of such disorders in industrialised countries, this "Hygiene Hypothesis" has led to the proposal that worms and their secreted products offer a novel platform for the development of safe and effective strategies for the treatment of allergic and autoimmune disorders. We summarize here, the current understanding of helminth-derived molecules with immunomodulatory activity and their associated cellular and molecular mechanisms that act in the host to modulate the immune response. In addition, we reveal how these findings have been applied in the clinic and in research to develop novel therapies for allergy and autoimmune diseases, like asthma, rheumatoid arthritis, inflammatory bowel disease and multiple sclerosis.

It is postulated that helminth infections are able to protect their hosts from immune mediated diseases such as allergies and autoimmune diseases, due to strong parasite-driven immune regulatory processes. The development of helminth-based therapies is very attractive to treat those pathologies. In this chapter, we will be reviewing some epidemiological and experimental evidences whereby helminth infection could protects from immune-mediated diseases, the mechanisms that are behind this phenomenon as well as the main strategies that have been used by research groups to develop biological products for treatment and prophylaxis of these immunopathologies based in mild infection by worms or, more importantly, their molecules.

The Impact of Helminths on the Human Microbiota: Therapeutic Correction of Disturbed Gut Microbial Immunity

Intestinal microbiota is in strict relationship with gut immune cells and a good balance between both components is able to guarantee a condition of healthy status in the host. Helminths tend to alter the host immune system via release of anti-inflammatory cytokines and, in particular, interleukin (IL)-10. IL-10 release by FoxP3+ T regulatory (Treg) cells, in turn, down-regulates T helper (h)2 cells, which instead protects the host against helminths. At the same time, helminths are able to interact with intestinal microbiota, thus leading to either harmful or protective effects. Therapeutically, polyphenols have been shown to modulate gut microbiota, also interfering with helminth development. In this context, our studies using polyphenols from red wine and fermented grape marc have shown antiinflammatory activities exerted by these compounds, even including expansion and activation of Treg cells. Since evidence has been provided that Treg cell activation with production of IL-10 can attenuate immunopathology in the later phase of helminth infections, dietary polyphenols may be beneficial in the chronic stage of parasitoses.

This volume covers research on the interaction of major helminth parasites with the immune system. The main focus of the e-book is the ability of helminths to subvert host immune responses, on the one hand. On the other hand, the immunological armamentarium of the host against invading parasites is described also in the light of new findings on innate and adaptive immunity. These include the discovery of a new category of lymphocytes, innate lymphoid cells, and the role of T helper cels such as Th1, Th2 and Th3 cells, T regulatory (Treg) and Th17 cells in helminth diseases and inflammation. The balance between these two T cell subsets during the various stages of helminth diseases is also discussed. The book concludes with a review of new therapeutic approaches to combat helminth parasites (biotherapy, vaccines and natural products). Immunity to Helminths and Novel Therapeutic Approaches provides updated information for medical students, clinicians and researchers in the fields of parasitology, applied immunology and novel drug delivery.