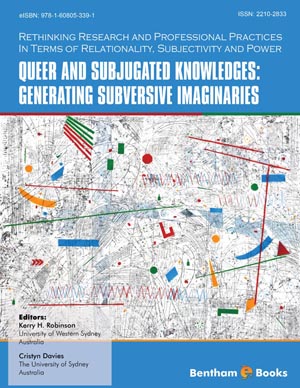 This chapter looks at queer places and times on Summer Heights High, the hit Australian television mockumentary. The success of the program pivots on the credibility of the performances of actor Chris Lilley as 16-year-old schoolgirl (Ja’mie King), 13-yearold Tongan schoolboy (Jonah Takalua) and drama teacher Mr G. Although Lilley’s performances can be read as ‘drag’ in their subversion and exaggeration of sex and gender norms, the chapter argues that beyond the bodies of Jonah and Ja’mie, subversive imaginaries are enacted in the narrative through two minor characters, Ofa and Tamsin. The student characters are traced through a series of scenes that take place in the very queer places of the boys’ toilets, the Year 11 formal and ‘Polyday’ celebrations. Gannon suggests that the excessive performances of the characters draw attention to sexuality, gender, class and race in secondary schools, and not only to the operations of these striations of identity but also to their instability and contingency. This chapter details normative structures and processes as manifested and subverted in Summer Heights High. It considers the ambiguities of parody, where Lilley articulates homophobia and racism at the same time as they are critiqued. It examines the operations of drag to show how Lilley’s performances of race and gender demonstrate that these are not sutured to particular bodies. Bronwyn Davies provides a response to this chapter.