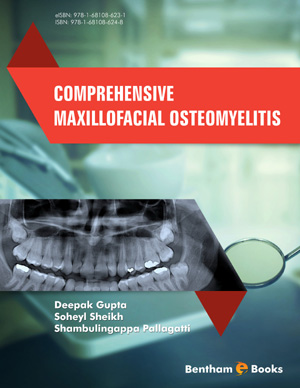 The management of osteomyelitis was an issue of great debate and research since long. The treatment of osteomyelitis has been practiced by various clinicians. Literature also reveals that the treatment of osteomyelitis of jaws was practiced since the year1900. There are three treatment protocols advocated for osteomyelitis which vary from simple non-invasive approach like antimicrobial therapy to more invasive and radical treatment like surgical removal of the affected part. The nonsurgical approach includes various medicinal treatment options including antibiotics,antiinflammatory and muscle relaxants. There is evidence of certain other conservative non surgical management approaches like hyperbaric oxygen therapy and bisphosphonate treatment too. If the dental professional considers that the non surgical approach may not fetch required results; then a surgical intervention is considered. This may include decortications alone or with bone grafting and partial or segmental resection. Unfortunately, there still exist dilemmas as to what approach to be followed in certain cases of osteomyelitis of jaws. This is because of the evidence of multiple recurrences of the disease. Further it is also reported that sometimes aggressive management may lead to significant co-morbidity with subsequent need for reconstructive surgery. Literature also reveals that symptomatic treatment may also be necessary in some cases. Such symptomatic treatment may include debridement of necrotic tissues and foreign materials along with skin closure of unhealed wounds. This present chapter highlights the various treatment protocols instituted and adopted by various researchers worldwide with recommendations for better treatment protocol for the dental professionals.