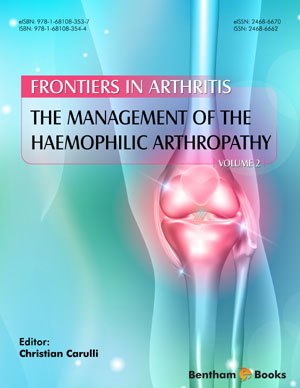 In haemophilic arthropathy (HA), a spontaneous joint bleeding may trigger and perpetuate synovitis, and cartilage damage may follow even after a single exposure to blood, leading to a progressive and permanent joint damage. Ultrasonography (US) may detect articular and periarticular structures, muscles, tendons, tendon-sheats and enthesys. While power Doppler (PDUS) detects synovial inflammation and local blood flow. The US is based on technique, concepts and method widely accepted. We describe a US protocol to study the typical target joint (elbows, knees, and ankles). Knees, elbows, and ankles can be systematically and easily evaluated by means of conventional US machines, including portable machines, with a linear probe 13-4 MHz. The presence of haemarthrosis and the evidence of a synovial neoangiogenesis is assessed by PDUS in longitudinal scan. In the last decade, some scoring methods were proposed. Our scoring system requires a practice of US technique without necessarily being expert sonographers and allow to study all joints in static and dynamic position through nine items. This scoring method is applied to each target joint with a range from 0 to 21 and with cut off ≤ 5 or >5 useful to define the early stage of arthropathy.