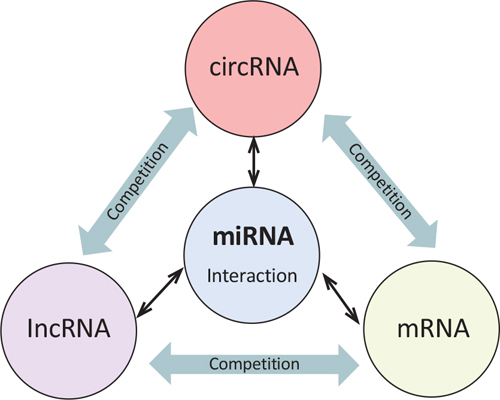 Abstract:Liver fibrosis or scarring is the most common pathological feature caused by chronic liver injury, and is widely considered one of the primary causes of morbidity and mortality. It is primarily characterised by hepatic stellate cells (HSC) activation and excessive extracellular matrix (ECM) protein deposition. Overwhelming evidence suggests that the dysregulation of several noncoding RNAs (ncRNAs), mainly long non-coding RNAs (lncRNAs), microRNAs (miRNAs) and circular RNAs (circRNAs) contributes to the activation of HSC and progression of liver fibrosis. These ncRNAs not only bind to their target genes for the development and regression of liver fibrosis but also act as competing endogenous RNAs (ceRNAs) by sponging with miRNAs to form signaling cascades. Among these signaling cascades, lncRNA-miRNA-mRNA and circRNA-miRNA-mRNA are critical modulators for the initiation, progression, and regression of liver fibrosis. Thus, targeting these interacting ncRNA cascades can serve as a novel and potential therapeutic target for inhibition of HSC activation and prevention and regression of liver fibrosis.