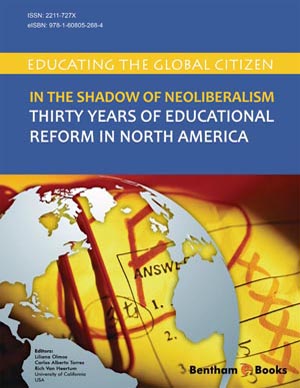 In the Shadow of Neoliberalism: Thirty Years of Educational Reform in North America

Educational Reform in the U.S. in the Past 30 Years: Great Expectations and the Fading American Dream

In this chapter we explore changes in the U.S. Educational system over the past 30 years. We argue that neoliberalism has dominated the debate, moving away from the progressive reforms of the 60s and 70s, and making economic imperatives the key focus of schooling in America. We start with a brief overview of educational organization and funding in the U.S. then move on to an historical analysis of the educational policies and rhetoric of the five presidents that have been in office during this period. We next consider the major trends over the past 30 years including the accountability and standards movement, privatization and school choice, professionalism and accreditation, resegregation and persistence of racial achievement gaps and the changing nature of educational research. We conclude by considering the broader implications of these changes, and the threat they pose to the role of education in social justice, democracy and freedom.

In this paper, we build on Rosaldo's (1989, 1997) notion of cultural citizenship and Valenzuela's (1999) concept of subtractive schooling to derive the notion of “subtractive citizenship” within a Critical Race Theory (CRT) and globalization perspective. After outlining contemporary discourses of citizenship within which we situate the notion of subtractive citizenship, we address Texas' current and projected demographic changes and how these are in turn affected by migratory processes rooted in powerful, global shifts as a result of neoliberal reforms in government and policy. We then turn to select cases of political deliberations conducted in Texas' 80th legislative session that underscore the present crisis and conclude with reflections that reinforce the need to think “additively” about citizenship education and require alternative conceptions about citizenship that collapse narrow, Cartesian “either-or” distinctions and imagine the need for “global citizens.”

Restrictive English-Only Policies in a Globalizing World: The Conflictive Case of Arizona Orchestrated by a Conservative Politic

The term globalization is never far from the front pages of newspapers. It evokes strong positive or negative feelings depending on whether it is being praised by the business community for opening up world markets to more extensive trade, or condemned by those who associate the term with the dramatically widening gap between rich and poor nations and people. One aspect of globalization that has important implications for educators is the increasing movement of people from one country to another. Population migration is caused by many factors: desire for better economic conditions, the need for labor in many countries that are experiencing low birthrates, a constant flow of refugees resulting from conflict between groups, oppression of one group by another or ecological disasters. One obvious consequence of population mobility is increased linguistic, cultural, racial and religious diversity within schools (Cummins, 2006, p. xxix). In this chapter we look at language policy in education in Arizona and its relationship to broader national and global trends regarding issues of diversity, assimilation and nativist politics.

As the Canadian system of education is a collection of regional systems, rather than describing school policies and developments in each of Canada's ten provinces and three territories, the article concentrates on developments in the three largest provinces: Ontario, Quebec, which, by virtue of its history, culture and language, is somewhat distinct from the rest of Canada, and British Columbia,(together these three provinces represent more than three fourths of Canada's 33.8 million population). In all of these jurisdictions, governments have pushed neo-liberal agendas, for example by fostering private schools (‘increasing choice’), introducing a number of market mechanisms into the public school system, imposing standardized testing, enhancing competition between schools, and allowing private companies to advertise their products in schools. In the section on Ontario, a case study is provided how a neo-liberal government, under the flag of a ‘Common Sense Revolution’, has pushed its agenda and profoundly changed the school system in a matter of only eight years. The section on British Columbia looks at a larger period of 30 years and documents the results of a more gradual shift towards privatization. The section on Quebec shows how initially a strong Teachers Union has been able to resist and slow down intended changes but that the province has followed the other provinces when the Social Democrat government was defeated in the elections and the union became fragmented and therefore lost its influence.

This chapter describes and analyzes some of the main educational policies carried out in Mexico during the past thirty years. It is necessary to emphasize that the context in which these policies have been implemented was principally characterized by adherence to the neoliberal economic policies in the country, which started at the beginning of the 1980s with a so-called structural adjustment plan. Neoliberal policies continued throughout the final years of that decade under the denomination of “politicas modernizadoras” (modernizing policies) and, with some variants, were maintained in the subsequent governments and continued being applied up to the present day. It is remarkable that those policies have followed essentially the same direction despite the fact that, since 2000, two administrations of different political parties have handled the political power in Mexico. We explore this within the context of the acceleration of the process of globalization.

Globalization has emerged as one of the key social, political and economic forces of the twenty-first century, challenging national borders, long established institutions of governance and cultural norms and behaviors around the world. Yet how has it affected education? The series explores the complex and multivariate ways in which changing global paradigms have influenced education, democracy and citizenship from Latin America, Europe and Africa to Asia, the Middle East and North America. It seeks to unearth how these changes have manifest themselves in daily classroom experiences for teachers and administrators the world over and how recent events might influence future change.