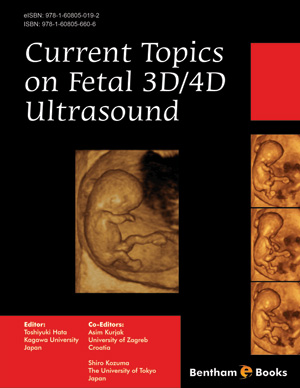 Transvaginal 2D and 3D allow the detection of about 65-75% first trimester malformations. The normal embryonic weekly ultrasound timetable is summarized and compared with the appearance of morphologic and hemodynamic markers of fetal wellbeing and of chromosomopathies located either in the embryo/fetus, in the adnexae and in the amniotic fluid. Special attention is paid to: the nasal bone, the nuchal translucency, the fronotmaxillary, mandibulomaxillary angles, mid-face hypoplasia and iniencephaly a letal defect of the neuropore. All abdominal wall defects which appear the the early 14th weeks are showing, including the most infrequents as ectopia cordis, bladder and cloacal exstrophy and Cantrell pentalogy. Urinary tract malformations, 40-50% of all the prenatally detected malformations, can also partially visualize early in pregnancy. The following hemodynamic embryonic markers are described: subchorionic flow, cardiac rhythm umbilical cord and fetal vascular anomalies. Finally adnexal malformations such as the ones located in the amnion, amniotic fluid and umbilical cord are mentioned.

Hydrocephaly or ventriculomegaly is caused by an abnormal volume increase of the brain’s lateral ventricles. Acrania, exencephalia and anencephalia start from a single process as a consequence of an early closure defect of the anterior neuropore. Encephaloceles are extremely grave bone defects, almost always of the frontal or occipital bones, often associated with chromosomopathies. Ciclopia and proboscis, also called “polyfemus”, always letal, are fetuses presenting a frontonasal malformation showing one single eye with or without a dermo-cartilaginous appendix above the eye anlage, Craniosynostosis is defined as the premature closure of the calvarian sutures and includes the following anomalies or syndromes: Apert, Crouzon, Pfeiffer, Saethre-Chotzen, Jackson-Weiss and Antley Bixler. Ear malformations can arise from embriologic migration or rotation defects and are often associated with other embriopathies, Charge association, Vacterls syndrome, or chromosomal defects such as trisomies 13-15, 18, 21 and 22. Orofacial teratomas are extremely rare and occur at the base of the cranium in the roof of the hard palate or on the mandible. Cleft lipe and cleft palate are generally associated with other major or minor malformations especially from de CNS and with chromosomopathies. Retrognathia is a condition of facial disharmony whether Micrognathia is an abnormal smallness of the jaws frequently associated with chromosomopathies and genetic syndromes. Dandy-Walker is characterized by the presence of a cyst in the posterior fossa that communicates with the fourth ventricle showing a total or partial defect of the cerebellar vermis. The aneurysm of the vein of Galen refers to different midbrain arteriovenous fistula malformations associated with aneurysm dilatation of the veins. 4D Angiodoppler seems to be very useful for the definitive diagnosis. Congenital goitrus hypothyroidism is very rare but potentially dangerous due to its lifelong consequences.

The acardius fetuses or TRAP, consequence of vascular anastomoses in the placenta, may disrupt organogenesis in the recipient.They are classified as acardius amorphous, acormus, acephalus and anceps. Diagnosis is now possible during the first trimester by using trasnvaginal 3D Doppler Angiography. Conjoined twins are variants of monozygotic twins that occur by incomplete dissociation of cells from the internal cellular mass, especially during the hatching process. Thanatophoric dysplasia is the most common lethal osteochondrodysplasia. The different skeletal dysplasias, the mentioned, dysostosis, idiopathic osteolisis, disorders resulting from chromosomal defects and resulting from primary metabolic disorders, are showed by using their US typical images. Achondroplasias, an autosomal dominant disorder related to a defect in the short arm of chromosome 4, can be homozygous (lethal) or heterozygous (most live newborn). Osteogenesis imperfecta includes disorders of the connective tissue and bone fragility, particularly of the skeletal system. Lung malformations, bronchogenic cyst and cystic adenomatoid malformation have characteristic differential 3D US images. Cardiac tumors are rear findings and have been identified with fetal echocardiography, improving the perinatal outcome. Neural tube defects, myelomeningocele and spina bífida, are among the most difficult malformations to diagnose, requiring considerable experience and the use of 3D. Sacrococcygeal teratomas represent more than half of all fetal solid tumors. Fetal limb malformations are classified depending on whether the anomalies are predominantly of bone length or of digital deformities. Congenital multiple arthrogriposis or joint gryposis describe a syndrome consisting of multiple contractures and joint dislocations of a very poor perinatal outcome. Gastrointestinal malformations are numerous with different locations and prognosis. We are showing all of them by using 3D/4D, paying special attention to the most common ones: gastroschisis and omphalocele. Renal and other urinary tract malformations represent 20% of all congenital anomalies. It is now possible to detect a wide spectrum using 3D. These may be either isolated or part of polimalformative syndromes. There are very few reports of intersexes and other Genital malformations. Amniotic band syndrome is characterized by multiple malformations secondary to amniotic bands that compress fetal parts causing amputations and other lesions.

Greatly improved diagnosis and investigation of fetal central nervous system abnormalities is the result of impressive technologic advances in ultrasonographic imaging. This applies as well to the study of spinal and facial abnormalities that are associated with central nervous system anomalies. More attention has been paid to midbrain structural defects, such as agenesis of the corpus callosum and abnormalities of the cerebellum, with the introduction of three- and four- dimensional ultrasound. Notwithstanding all these recent rapid technologic advances, many professionals --- except for a few pioneers --- have difficulty keeping up-to-date. The purpose of this review of basic principles and various applications of three-dimensional ultrasound to the fetal central nervous system evaluation is to inform professionals working in obstetric ultrasound of those advances. We will focus primarily on normal findings of three-dimensional sonography of the fetal central nervous system. We will also discuss a range of topics from methods of real-time scanning and software manipulation to the application of these techniques to each section of the fetal nervous system.

With great advancement in medical imaging methods, it is possible to measure the volume of fetal organs and structures. Two principal techniques have been described, the ‘parallel technique’ and the ‘rotational method’, but the latest one is more used over the world in clinical practice because of being easier and faster as well as allowing corrections on the multiplanar imaging. Recent studies have been using 3DUS in order to incorporate the soft-tissue thickness into the mathematical formulas to estimate fetal weight. A few equations have been reported which are present in this present chapter. 3DUS can also be applied for estimating fetal organ volumes. Fetal lung volumes can be useful for the prediction of pulmonary hypoplasia in thoracic malformations, while fetal heart volume for fetal heart function. To assess the status of fetal growth and nutrition, fetal liver has been proposed. Fetal renal volumes may be an interesting tool for the monitoring of renal conditions, including nephromegaly, hypoplasia and hydronephrosis. Fetal adrenal gland volumes could be of interest to evaluate adrenal tumors and to predict labor, since adrenal hormonal changes are implicated in triggering labor. Fetal brain volumes are also suggested to provide an insight into the nature of abnormal fetal growth. In conclusion, 3DUS can be indicated to improve the prediction of fetal organ dysfunction and weight disturbances.

Three-dimensional power Doppler angiography allows villous vessels to be evaluated ‘directly’, and in this way should be able to establish both normal development characteristics and anomalies. The study of placental circulation is of interest because the fetal growth restriction has been associated with deficient development of the placental vascular tree. Placental vascular patterns acquired using 3D color angiography at various stages of pregnancy reflects the development of the villous tree and intervillous space in vivo faithfully. ‘Virtual placental biopsy’ consists of taking a sample of the thickness of the placenta using 3D power Doppler angiography to study the volume and circulation of the placenta. Placental volume increases gradually and significantly with gestational age. 3D power Doppler indices are also significantly related to gestational age, though it is the flow index which shows the best correlation (r = 0.58). 3D power Doppler indices are decreased in IUGR when umbilical Doppler is altered, and we should be evaluated if these indices are predictive markers of this fetal growth abnormality.

Assessment of Fetal Behaviour by 3D and 4D Sonography

During the past few decades, morphological studies of fetal brain as well as ultrasound imaging of fetal intrauterine activities in the real time provided invaluable information about the most important events in the development of human central nervous system. Analysis of the dynamics of fetal behaviour has led to a conclusion that fetal behavioural patterns directly reflect developmental and maturational processes of fetal nervous system. It has been suggested that the ultrasound assessment of fetal behaviour could be used for the evaluation of fetal central nervous system and, possibly, for the detection of functional or structural brain disorders. The new and advanced imaging techniques such as four dimensional sonography might open a new perspective for the study of fetal behavioural patterns and facilitate the development of diagnostic strategies for early detection or prevention of brain dysfunctions. The aim of this chapter is to review the clinical application of three and four dimensional sonography in the assessment of fetal behaviour.