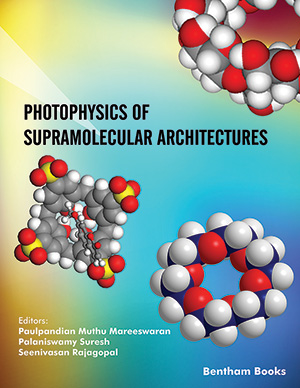 Luminescent Cyclodextrin Systems and Their Applications

This chapter explains the most recent development on different luminophore tethered cyclodextrin (CD), a cyclic polysaccharide and these applications in distinct areas. The host-guest inclusion complexation studies of CD with different guest molecules using fluorescence techniques are discussed. The hybrid materials of CD in the detection of biological analytes, toxic compounds and in-vivo bio-imaging applications are discussed. The compatibility nature of CD leads to its usage in drug delivery and the controlled drug dosage using CDs is explained. The interesting usage of CDs in counterfeit recognition and tunable emission are emphasised. The dimers and self-assemblies of CDs utilized for the enhancement of photophysical properties are discussed in detail. The CD hybrid materials exhibited numerous usage in essential needs.

Resorcinarene Crowns as Versatile Host Molecules and Their Potential Applications

Resorcinarene crowns are significant building blocks for supramolecular chemistry. Resorcinarenes are part of the calixarenes family and are macrocyclic, bowl-shaped molecules. Derived from four resorcinol subunits, they have hydroxy groups at the wide rim of the bowl. These cavities were utilized for their potential recognition of racemic guests and catalysis applications. In this chapter, we focused on the overview of synthesis, conformational properties of resorcinarenes crown and their potential applications such as separation technique using high performance liquid chromatography (HPLC), gas chromatography (GC) and ion chromatrography (IC). In addition, they are also used as chemo sensors, antibacterial and antioxidant agents, contrast agents, nanoparticles synthesis and catalytic systems. Finally, we concluded the chapter with the significance of resorcinarenes crown.

Since the development of supramolecular chemistry, synthetic macrocycles have also played an inevitable role in constructing the host-guest system. Among pillar[n]arenes, in short pillarenes, a decade-old younger member in the supramolecular family, after reported by Ogoshi et al. in 2008, has gained considerable attention. Due to the straightforward preparation methods, tunable cavity size, and symmetrical architecture makes it an ideal candidate in the supramolecular family. With this perspective, this chapter discusses a brief introduction to the synthesis, characterization, and structural features of different sizes of pillarenes. The presence of a confined hydrophobic and π-electron-rich cavity provided by a paraxyl ether or hydroquinone units offers a unique host-guest recognition capability towards positively charged and neutral molecules. Notably, the presence of a cavity with an aromatic wall provides a broad luminescent platform for various photophysical studies. This chapter elaborates on the contribution of pillarenes in tuning the photophysical properties of the small guest molecules and the formation of luminescent supramolecular materials. Further, the functionalization on the outer of the pillarenes has influenced the photophysical responses such as absorption and fluorescence, which paved a pathway for the development of supramolecular organic light-emitting functional material and novel sensor materials also discussed in this chapter. Finally, this chapter discusses all the progress and applications of luminescence pillarenes and their derivatives.

The development of fluorescence based supramolecules offering selectivity, sensitivity and detection in real time applications are of great interest. Cucurbit[n]urils (CB[n]), a macrocyclic synthetic host molecule consists of a varying number of glycoluril units bridged by methylene groups. CB[n]s easily forms host-guest complexes (inclusion complexes) with a wide range of analytes. The recognition of analytes in the presence of host molecules using fluorescence techniques received greater attention due to its rapid response, high sensitivity to the environment and robust adaptability. Exploiting the fluorescence properties of CB[n] based supramolecules by enhancing or quenching the fluorescence intensity in the presence of guest molecules by spectrofluorometric methods is discussed. A brief outlook on the development of fluorescence properties of CB[n] based supramolecules used for imaging and photodynamic therapy is presented and discussed.

Coordination-driven self-assembly provides unique opportunities to prepare highly complex chemical systems from simple components and has led to significant progress in the construction of supramolecular materials with novel topologies and exploitable functions. During the past few decades, metallacycles have captured widespread interests due to their wide applications in catalysis, sensor, and biological relevant applications. Thus, exploring new metallacycles, studying their physical and chemical properties and applications have become one of the most attractive and exciting areas of inorganic chemistry and supramolecular chemistry. Among which, rhenium(I)-based metallacycles, constructed from the rhenium metal ions and a variety of aromatic ligands, have attracted considerable attention because of their unique potentials in light-harvesting, catalysis, sensing, biomedical, etc. In this chapter, we summarize the recent research progress in rhenium-based metallacycles with their synthesis, properties and potential application in host-guest chemistry.

Recent Developments in the Dynamics of Fluorescently Labelled Macromolecules

There is considerable interest in the photophysics and photochemistry of water-soluble macromolecules functionalized as pendant or copolymerized on the macromolecular backbone itself. A promising feature of functionalized macromolecules is that a large variety of chemical modifications based on molecular design is possible as compared to conventional organized assemblies such as micelles and vesicles. Photoactive macromolecules have important applications in photoresists, xerography, photocuring of paints and resins, and solar energy conversion systems. These macromolecular systems are broadly classified into two categories: (1) in which chromophores are directly attached to the backbone of the macromolecule as a pendant and (2) in which the macromolecule acts as a host to the photosensitizing molecules. Various aspects of photochemical and photophysical processes in polymers are discussed earlier in detail. Time resolved fluorescence techniques have been extensively used to study the dynamics of natural and synthetic macromolecules. This book chapter covers the investigations on the dynamics polymers in solution using a variety of time resolved techniques ranging from a few femtoseconds to several seconds.

This reference provides collective information about the physical and photophysical changes of supramolecules after encapsulation. It covers luminescent systems involving a range of host molecules such as calixarenes, cyclodextrin, resorcinanene-crowns, pillararenes, cucurbituril, and metallacycles. Chapters also discuss the effect of the macrocyclic environment on the properties of functionalized molecules, including the variations in folding and unfolding patterns. Each chapter is supplemented with detailed references, making this an ideal resource for scholars interested in supramolecular photophysics.