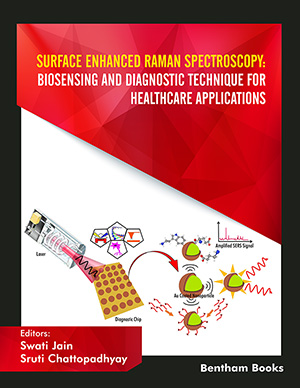 Raman spectroscopy depends on inelastic scattering of photons, known as
Raman scattering. It uses monochromatic light using a laser and determines vibrational
modes of molecules. This technique is commonly used for the identification of
molecules by providing its structural fingerprint. Due to very low inelastic scattering,
however, signals obtained by Raman spectroscopy are inherently weak and the problem
is more with visible light. These weak Raman signals can be used by amplifying them
by the method known as surface enhanced Raman spectroscopy (SERS). SERS is a
powerful vibrational spectroscopy technique that allows for highly sensitive structural
detection of low concentration analytes. The current chapter summarizes the basics of
Raman spectroscopy and SERS, instrumentation, mechanisms differences and
applications.

Enhancement Mechanisms and Theory of SERS

This chapter starts with a brief introduction to basic Raman Spectroscopy,
its strengths and bottlenecks leading to ineffective utilization of the technique in its
conventional form. Further, the basic principle of Surface Enhanced Raman
Spectroscopy (SERS) has been discussed along with its development as a vibrational
spectroscopic tool of analytical importance. The milestones related to the development
of new methods in SERS have also been covered. The major focus of the chapter is to
describe the enhancement mechanisms responsible for magnificent enhancement
obtained in SERS as compared to normal Raman Spectroscopy. Out of various
mechanisms, the electromagnetic (EM) mechanism has been considered to play the
most significant role in enhancement. Localized Surface Plasmon Resonance (LSPR) is
chiefly responsible for the whole EM enhancement leading to E4 enhancement and
therefore, it has been discussed in detail. Other mechanisms like chemical and
electronic enhancement mechanisms have also been discussed extensively. The
dependence of SERS on various factors like substrate, excitation wavelength, size and
shape of nanoparticles, etc., has been explained with emphasis on the reported data
followed by analysis. Two photon excited SERS has been presented as a special class
of SERS. Towards the end, the application of SERS to achieve the ultimate limit of
detection by probing single molecules has been emphasised. In this context, Hot spots,
the heterogeneous nanoregions causing extremely large enhancements and their various
generations have been presented along with preliminary theoretical and experimental
results.

This chapter explores the recent advances in implementing diverse plasmonic
and non-plasmonic nanomaterials actively for Surface Enhanced Raman Scattering
(SERS). This chapter, chiefly presents a detailed outline on the potential applications of
SERS probe either as Raman reporter molecule (RRM), conjugates of RRM with
plasmonic nanomaterials, silica encapsulated conjugate probe of RRM with plasmonic
nanomaterials. Overall, this chapter collectively emphasizes addressing the
performance mechanism along with pros and cons of different materials.

Raman scattering spectroscopy was discovered in 1928 by CV Raman and
KS Krishnan. The technique has developed enormously and it is becoming useful in
many ways for studying biochemical events and structural intricacy of biological
macromolecules such as RNA, DNA, protein and their assemblies. The focus of this
review is on the recent application of Raman spectroscopy to research achievements of
protein aggregation and fibrillation of several proteins and peptides. Particularly we
analyzed the protein secondary structure of different assembly structures captured in
the fibril formation pathway with a particular focus on oligomeric intermediate which
is believed now to be most cytotoxic. This intermediate structure attains characteristic
morphological features while the constituent protein may/may not differ much in their
secondary and tertiary structure in the native physiological conditions. Conformation
states of proteins in the oligomeric state obtained by Raman spectroscopic analysis,
particularly aid in comprehending the structure of the oligomer and overall mechanisms
of fibrillation and amyloid formation. It has been established that the backbone amide
band and side-chain vibrations of amino acid residues present in protein molecules
largely affected the fibril formation pathway and it follows a concerted reaction
pathway, i.e. the protein molecule transform into β- sheet rich amyloid fibril via
formation of an oligomeric intermediate. However, the intriguing and interesting fact is
that the proteins maintain/attain some helical pattern in the oligomeric step. Raman
analyses established the distribution of residues in both helical and β-domain, possesses
similarity with molten globule like structure. However, in the fibrillar state, the protein
backbone attains anti-parallel β-sheet structure and several side-chain residues may be
exposed on the surface of the protein and it is evidenced in the Raman spectra of the
fibrils. The review particularly focuses on the aggregation and amyloid-like fibril
formation of hen egg-white lysozyme (HEWL) and discusses different aspects of fibril
formation mechanisms based on Raman spectroscopic data analysis.

During an epidemic, it is judgmentally vital to monitor the spread of the
disease by proper diagnostic testing to detect pathogens. However, inadequate numbers
of testing can hamper the detection of pathogens to prevent the spread. Consequently,
healthcare systems require tests that are rapid, sensitive, inexpensive, and easy to use
for diagnosing infections at earlier stages, even before symptoms become apparent, to
reduce both the transmission and mortality rates. Among new and novel detection
protocol, Surface-enhanced Raman scattering (SERS) has emerged as a versatile and
popular surface sensitive spectroscopic analytical tool in consequence of the colossal
amplification of weak Raman signal in the presence of plasmonic nanoparticles
providing suitable detection of various chemical and biological systems and can be
further utilized for rapid detection of pathogens. SERS technique has diverse
applications ranging from plasmonics, sensing, catalysis to biomedical applications and
diagnostics. This novel powerful analytical technique has been utilized to detect
various biomolecules such as carbohydrates, proteins, amino acids both qualitative and
quantitatively. SERS can even be used to detect pathogens including bacteria and
viruses within a short timescale. There are few review articles written on the SERS
based detection of various biomolecules. SERS technique has the great capability of a
versatile bioanalytical tool for forefront implementations such as microorganism. In
this book chapter, the exploitation of various SERS active substrates for the rapid
identification of pathogens like viruses and bacteria has been discussed. The various
studies involving the utilization of SERS technique to detect pathogens has been
reviewed by us comprehensively in a comparative manner providing a novel approach
in terms of diagnostics applications. Some examples have been illustrated from the
recent studies on the detection of pathogens by SERS technique from our research
group.

Translation of investigative cellular analysis into reliable clinical settings is
a challenge and surface enhanced Raman spectroscopic (SERS) technique has the
potential to move beyond laboratorial examinations. Quantitative and qualitative
measurement of cellular components and their properties is essential indicative of
healthy or disease state. Pre-emptive analysis of diseased state offers synchronization
with early diagnosis of certain medical conditions and is requisite for initiation of
therapeutic interventions. High sensitivity and capacity for multiplexing renders SERS
suitable for biochemical analysis for disease diagnosis a critical step towards
formulation of therapeutic regime. SERS assists in a deeper understanding of cellular
processes and its micro environment without disturbing and damaging the cellular
milieu in 3 dimensional (3D) set up without invading the tissues. Fabrication of novel
nanostructures with enhanced plasmonic effects has also propelled the growth of SERS
based analysis of cellular structure in normal and abnormal circumstances. Thus, SERS
is operating as diagnostic tool for in-vitro, ex-vivo and in-vivo investigations for
assessing onset of disease as well as prognosis of the therapy in hospitals and clinics.

Point-of-care (POC) diagnostic analysis is a fast rising arena that goals to
improve the rapidness, low-cost, sensitive and selective in-vitro diagnostic analysis
platforms that are independent, moveable, and can be used everywhere from current
clinics to isolated and low resource regions. In addition, surface enhanced Raman
spectroscopy (SERS) offers a suitable sensory stage whereby objective particles at
smaller concentration are recognized, potentially identifying a particular substances.
There are some analytical methods which can induce motivated Raman scattering,
significantly attractive the possibility of Raman scattering, but most of these
procedures need ultra-fast tunable lasers and microscopy set-ups making them
impossible for most users. SERS exploits surface plasmons to improve Raman
scattering by numerous orders of magnitude, without lacking various equipment than
traditional Raman spectroscopy. As a result, SERS has been extensively useful in a
selection of research activities using various substrates, one of which is a smartphone
based biosensors. In outlining the development of SERS methods over the past few
years joined with new expansions in smartphone based biosensors, metal and metal
oxide nanomaterials, low-cost paper diagnostics, and high-quantity of microfluidics, a
wide-ranging number of novel potentials display the possible for decoding SERS
biosensors to the POC.

In this chapter, we briefly discussed the bottlenecks commonly present for
using the surface enhanced Raman spectroscopy (SERS) in research. The barriers in the
successful commercialization of this technique are also highlighted in this chapter. This
chapter is also dedicated to the account of possible key strategies for improvement of
SERS. Among these strategies, we discussed one of the promising strategies based on
improved nanofabrication at length. Furthermore, few recent important developments
in SERS instrumentation and handheld portable devices are also highlighted in this
chapter for providing broader information to the readers.

Surface enhanced Raman spectroscopy (SERS) is a technique applied in multidisciplinary research. Its use has tremendously grown in the last 40 years owing to improved nanofabrication, biomolecules extraction and sensitive signal acquisition techniques. This book focuses on the underlying principles of SERS by emphasizing on basic concepts and background information about the subject. Chapters explain the physics of Raman spectroscopy while also indicating its relevance to designing protocols and methodologies for biosensing and imaging. The book gives updated and recent details on colloids and nanostructures, their fabrication, surface engineering and immobilization methods, all in context to SERS based biosensing. Key Features: - Covers basic knowledge and new research about surface enhanced Raman spectroscopy (SERS) - Provides a complete framework on SERS based biosensing with concise chapters - Focuses on different active molecules critical to SERS and associated developed nanoassemblies - Presents information about ongoing research on SERS imaging applications - Highlights bottlenecks of SERS technique in biosensing - Includes references for further reading This book serves as a reference book for researchers and academicians and will also provide a reasonable understanding on the topic of SERS to newcomers irrespective of their background in a simple manner. The book is of interest to all readers within the scientific community involved with Raman spectroscopy, including chemists, physicists, biologists, material scientists as well as biomedical engineers.