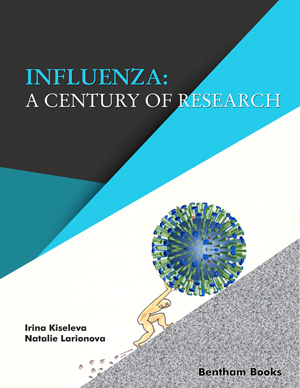 Influenza: A Century of Research

The first animal influenza A virus was isolated in 1931 by Richard Shope. The virus caused a highly contagious, influenza-like disease in pigs. Two years later, in 1933, the first human influenza A virus was isolated by Wilson Smith and colleagues. Soon after, in 1940, a representative of influenza virus type B was discovered by Thomas Francis, Jr. Being obligate intracellular parasites, viruses can be cultivated only within sensitive substrates. Three main substrates for the cultivation of influenza viruses are known: sensitive animals, embryonated chicken eggs, and tissue cultures. Today, in the twenties of the 21st century, sensitive animals are not often used for the isolation of the infectious virus. However, they are widely used to study and model a number of infectious diseases, including influenza. A list of these animals used for influenza research is very long, starting from ferrets and mice and ended with exotic zebrafish.

Each year, influenza causes a significant acute respiratory disease burden. Also, influenza pandemics periodically occur. Annual vaccination is the best tool for influenza prevention, but its effectiveness can vary from year to year. Antiviral treatment shortens the clinical course if administered within the first hours of the onset of the disease. Neuraminidase inhibitors (oseltamivir, zanamivir, and peramivir) and polymerase inhibitors (baloxavir) are currently used as antivirals. Limited specificity of conventional vaccines and drug resistance of circulating viruses reduce the effectiveness of prophylaxis and treatment, requiring the development of new broadspectrum drugs.

Reasons for Insufficient Control of Influenza

The emergence of novel respiratory viruses has often been accompanied by the disappearance of existing circulating strains. In this chapter, the impact of pandemics on the circulation of seasonal respiratory viruses is discussed. Some issues arising from the spread of pandemic viruses and underlying the choices of a strategy of fighting COVID-19 are under debate.

Is it Possible to Eradicate Influenza?

This short final chapter has been written in the form of a conclusion; it is devoted to summarizing the 100-year study of influenza. The main achievements in the study and fight against this infection are listed. The possibility of defeating influenza in the foreseeable future is discussed.

Influenza is one of the most ancient and intriguing diseases that has been accompanying our civilization for millennia. While mankind has successfully defeated many dangerous influenza infections in the last couple of centuries, influenza control remains a serious problem for public health. A number of influenza vaccines and antiviral compounds have been licensed in recent times. However, the influenza virus is still ahead of us, as it continues to persistently infect humans to this day. Influenza: A Century of Research shows how influenza virology has developed historically and the tremendous knowledge that has been uncovered in the study of influenza. In this monograph, the authors present a historical perspective on influenza, chronologically, with an emphasis on its virology. Chapters cover information about the isolation of the first influenza viruses, substrates, and models for studying influenza, structure, and life cycle of the influenza virus, mechanisms of attenuation and virulence. Chapters progress into the multidisciplinary aspects of influenza research such as influenza virus ecology and the evolutionary origin of epidemic and pandemic influenza viruses. A significant part of the book also covers the description of the prevention and treatment of influenza and reasons that have contributed to insufficient control for influenza. The questions of how the COVID-19 pandemic affects the circulation of seasonal respiratory viruses, and if we can eliminate this virus are also addressed. Influenza: A Century of Research is an informative source of information for a broad range of readers, academic or otherwise, who are interested in knowing more about the disease.