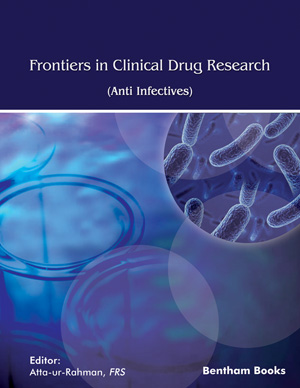 The hepatitis C virus (HCV) infection is a major and rising global health problem, affecting more than 71 million people worldwide. HCV is connected with several hepatic and extrahepatic disorders, containing several malignancies. Improved HCV detection with combined simple, well-tolerated treatments could reduce the need for liver transplantation and HCV related mortality. The latest therapeutic advances might convert chronic HCV into a routinely treatable disease. The introduction of direct-acting antivirals (DAAs) has improved efficacy and tolerance of treatments with high cure rates. DAAs target specific nonstructural proteins of the HCV with consequential interference with viral replication and consequently infection. The majority of the FDA approved drugs for HCV and those pending approval are small molecule drugs, especially those that utilize the viral inhibitor mechanisms of action and favor the HCV nonstructural proteins as their targets. Therefore, DAAs represent the most promising anti-HCV drugs that carry the least risk of drug failure during clinical trials. NS3/4a protease inhibitors have become the basis for HCV treatment as most new therapies contain an inhibitor from this class. It is reported that the approach for combating chronic viral infections is best achieved by a combination of several strategies, by means of inhibiting several targets. Moreover, the best promising strategy for fighting HCV is most similar to the anti-HIV therapy. A literature review was conducted to identify published clinical trial results regarding DAA combination therapy with third generation NS3/4a protease inhibitors. Detailed attention is given to the chemistry of the approved NS3/4a drugs and candidate therapeutics in the advanced stages of development. In this regard, a review of key drug design and organic synthesis stages is presented for anti-NS3/4A DAAs.

Infectious diseases are caused by pathogenic microorganisms, such as bacteria viruses,or fungi, and can be spread, directly or indirectly, from one person to another. Among these diseases, AIDS, tuberculosis, influenza, hepatitis and neglected tropical diseases, such as dengue and malaria, stand out. On the other hand, emerging infectious diseases are infections that have recently appeared in a population or those whose incidence or geographical range is rapidly increasing and / or threatens to increase in the near future. Since the 1970's, approximately 40 infectious diseases have been discovered, including SARS, MERS, Ebola, Chikungunya, avian and swine flu, and, most recently, Zika. The transmission modes for the different existing infectious diseases vary greatly, among them the most common are through water and food, vectors, zoonosis (diseases transmitted by animals), sexual transmission, blood, air and soil. Anti-infective drugs development and the remarkable eradication of smallpox in the 1980’s, following a global immunization campaign led by the WHO (World Health Organization), generated the hope that infectious diseases could be controlled and even eliminated. However, the current perception that infectious diseases continue to emerge and re-emerge (including the possibility of bioterrorism), highlights the future challenges in infectious diseases research. The modern medicine needs new antiinfective drugs in order to treat specific drug-resistant infections at the same time as the drug development pipeline is almost dry. Thus, the development of new drugs and antiinfective compounds is needed, such as the use of plant-derived latex, which is well studied and present great potential. Therefore, the objective of the present chapter is to give an overview regarding the use of plant-derived latices as anti-infective compounds, as well as to point out new perspectives on this matter.

Bioaccumulation in sanitary devices, caused by opportunistic pathogens, intervenes negatively in the recovery of a patient since these are able to provoke a mild or life-threatening infection. Thus, surfaces of certain materials such as gauzes, catheters, sutures, etc., which are adjacent or directly exposed to a healing zone, are prone to become sites for the growth, proliferation, and spread of pathogenic microorganisms. Although in surgical or healing processes, sterile materials are usually applied, the time of contact with biological interfaces is long enough to make the sterilization but not enough to control and prevent an infection since pathogens abound in the surroundings. Air, water, and soil can be potential vectors, without considering those factors related to iatrogenesis that also play a role in the opportunities for the patient's recovery. Within this context, engineered materials are currently being developed and explored towards devices and biomaterials with improved design, performance, duration, biocompatibility aiming to be safer for the user. The surface functionalization of materials with antimicrobial agents is a highlighted alternative to overcome this issue. This chapter addresses current antimicrobial materials, as well as strategies for obtaining antimicrobial surfaces and coating as well as their properties. In addition, the safety assessment of biomedical applications and international standards are discussed.

Recent Advances in the Treatment of Toxoplasmosis

Toxoplasmosis is caused by an obligate intracellular parasite, Toxoplasma gondii (T. gondii) which infects about thirty percent of the world human population. Infection occurs by the consumption of Toxoplasma tissue cysts in raw or undercooked infected meat, intake of the contaminated food or water with Toxoplasma oocysts shed in the feces of an infected cat, blood transfusion, placental transmission or organ transplantation. Toxoplasmosis is the most common opportunistic infection in the pregnant women and the immunocompromised individuals resulting in severe complications as encephalitis, pneumonitis and myocarditis with high mortalities. Unfortunately, few effective drug therapies for this disease are available, their aim being the decrease of the parasite replication rate to prevent more pathological changes in organs involved as well as to avoid the serious complications. The recommended therapy for treatment or prophylaxis of toxoplasmosis is the combination of pyrimethamine and sulfadiazine, in spite of this combination is so effective against acute toxoplasmosis but being unsuccessful in the treatment of toxoplasmic chorioretinitis, encephalitis, and congenital toxoplasmosis. Anti-Toxoplasmic drugs need to be effective against the all stages and strains of Toxoplasma parasite with a higher penetration into the cerebral, ocular and placental tissues and have no side effects as fetal toxicity and teratogenic effects. Up till now, there is no available drug has all these advantages. The occurrence of side effects, the development of resistant strains and the lack of effectiveness against Toxoplasma tissue cyst are the main disadvantages of the current drug therapies. The discovery of drug therapies with a lower toxicity and able to prevent and treat toxoplasmosis would represent a novel era in the treatment of this infectious disease, especially in immunosuppressed patients. Therefore, the researches technology with regard to the parasite’s proteomics and functional genomics are needed for the development of new and safer drug agents. Currently, an increase orientation of the pharmacological action of natural agents and medicinal plants are usually considered to be safer than synthetic drugs. The value of these plants as sources of natural product bioactive molecules to medicine related to their chemotherapeutic effect and considered as template molecules for the manufacture of new drug agents. Recently, most of the researches in the drug development for toxoplasmosis focus on the use of nanotechnology for improving the pharmacokinetic profile of drugs. The combination of nanoparticles and plant extracts to give rise broad spectrum of drugs may be a greater chance for defeating Toxoplasma infection. This chapter aimed at giving an update on the current progress in the development of new drugs for the treatment of toxoplasmosis.

Immunoglobulins, either natural or induced, represent powerful means for eliminating microbial threats. For decades, vaccines have been used which function by inducing antibodies for the successful elimination of microbes, preventing disease and mortality.

Polyclonal immunoglobulin products from human plasma were used for the first time to treat immune deficiency during the 1950s. Nowadays, the administration of immunoglobulin, either intravenous or subcutaneous, is the cornerstone of the treatment of primary immunodeficiency affecting the humoral immune system. The therapy can help people with weakened or underdeveloped immune system fight off infections. This is also the treatment of choice for certain autoimmune and neurological diseases.

The polyclonal antibody preparation consists of both natural antibodies and antigeninduced antibodies and reflects the history of antigen experience of the donor population. Natural antibodies are germline-encoded, polyspecific, low-affinity antibodies that also have a regulatory role in maintaining the immune system homeostasis. Antibody preparations, enriched for certain desired specificities, or hyperimmune human globulins are used for prophylaxis and treatment of infectious diseases with a high mortality rate.

It was shown that lymphocytes from survivors of viral infections, without available vaccines, could be used for protective monoclonal antibodies production. This chapter provides insight into the current knowledge of the usage of antibody preparations, efficacy and mechanism of action, with respect to specific diseases, including the treatment of infectious diseases and future prospects.

Frontiers in Clinical Drug Research &ndash; Anti infectives is a book series that brings updated reviews to readers interested in learning about advances in the development of pharmaceutical agents for the treatment of infectious diseases. The scope of the book series covers a range of topics including the chemistry, pharmacology, molecular biology and biochemistry of natural and synthetic drugs employed in the treatment of infectious diseases. Reviews in this series also include research on multi drug resistance and pre-clinical / clinical findings on novel antibiotics, vaccines, antifungal agents and antitubercular agents. Frontiers in Clinical Drug Research &ndash; Anti infectives is a valuable resource for pharmaceutical scientists and postgraduate students seeking updated and critically important information for developing clinical trials and devising research plans in the field of anti infective drug discovery and epidemiology. The sixth volume of this series features these interesting reviews: - Direct-acting antiviral drugs for treatment of Hepatitis C virus infection - Plant lattices as anti-infective compounds - Antimicrobial materials and devices for biomedical applications - Recent advances in the treatment of toxoplasmosis - Antimicrobial immunoglobulin prophylaxis and therapy - Targeting Magnesium Homeostasis as Potential Anti-Infective Strategy Against Mycobacteria