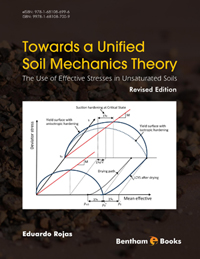 Towards a Unified Soil Mechanics Theory: The Use of Effective Stresses in Unsaturated Soil, Revised Edition

The use of the effective stress principle led to a general theory for the strength and volumetric behavior of saturated soils. Presently, all constitutive models for saturated soils are based on this principle. In 1959, Bishop proposed an equation for the effective stress of unsaturated soils. However, it was severely criticized because it could not explain by itself the phenomenon of collapse upon wetting. Moreover, an analytical expression for the determination of its main parameter χ was not provided and in addition, its value could not be easily determined in the laboratory. Since then several equations to determine the value of parameter χ have been proposed. Fifty years later, it has been acknowledged that Bishop’s effective stress equation can be employed to simulate the behavior of unsaturated soils when it is complemented with a proper elastoplastic framework.

Based on the study of the equilibrium of the particles of a soil sample subject to certain suction, in the previous chapter it was possible to establish an analytical expression for the value of Bishop´s parameter χ. This parameter can be written as function of the saturated fraction, the unsaturated fraction and the degree of saturation of the unsaturated fraction of the soil. However, the determination of these three parameters cannot be made from current experimental procedures. Therefore, a porous-solid model simulating the structure of the soil is proposed herein and used to determine these parameters. The data required to build the porous-solid model are the void ratio and the grain and pore size distributions.

Applications of the Porous-Solid Model

In this chapter, the probabilistic porous-solid model is used to determine the mean effective stress of soils at failure. The plots of the deviator stress against the mean effective stress show a unique failure line for a series of triaxial tests performed at different confining net stress and suctions for both wetting and drying paths. This result confirms that the proposed effective stress equation is adequate to predict the shear strength of unsaturated soils. It also results in different strengths for wetting and drying paths as the experimental evidence indicates.

This chapter presents the modeling of the phenomenon of collapse upon wetting using the effective stress equation established in Chapter 2 and the elastoplastic framework proposed in the previous chapter. Using the probabilistic porous-solid model, Bishop’s parameter χ can be obtained to determine the current effective stress. The proposed framework includes the hysteresis of the SWRC and to some extent the hydro-mechanical coupling of unsaturated soils. This model is able to reproduce some particularities of the phenomenon of collapse upon wetting that other models cannot simulate.

The phenomenon of hysteresis during wetting-drying cycles can be simulated by the porous-solid model developed in chapter 3. This model employs the current pore-size distribution of the material. The term “current pore-size distribution” means that the size of pores can be updated as the soil deforms. In that sense, the porous-solid can be used advantageously for the development of fully coupled hydromechanical constitutive models as the influence of the volumetric deformation on the retention curves and effective stresses can be easily assessed. This is done by including some experimental observations related to the behavior of the pore size distribution of soils subjected to loading or suction increase. This methodology avoids using any additional parameter or calibration procedure for the hydro-mechanical coupling of unsaturated soils.

In previous chapters, it has been shown that the principle of effective stresses can be applied to the shear strength, the tensile strength and the volumetric behavior of unsaturated soils. This chapter shows that the critical state line for unsaturated soils shifts with respect to the saturated critical sate line in a quantity that depends on the suction stress. Taking into account this phenomenon and the influence of hydro-mechanical coupling on the behavior of unsaturated soils, a fully coupled general constitutive models for soils is developed. This model is based on the modified Cam-Clay model and includes a yield surface with anisotropic hardening that takes into account the shift of the critical state line with suction. The result is a very simple model with a symmetric stiffness matrix that can be used for saturated, unsaturated and compacted materials.

With the application of the effective stress concept, the strength and volumetric behavior of saturated materials was clearly understood. For the case of unsaturated materials, a universally accepted effective stresses equation is still under debate. However, the use of the effective stress concept to develop constitutive models for unsaturated soils is becoming increasingly popular not only because the hydro-mechanical coupling observed in these materials is implicit in the formulation but also because simpler and more precise models can be established. Towards A Unified Soil Mechanics Theory demonstrates that the same strength and volume change equations used in saturated soil mechanics can be used for the case of unsaturated soils. In other words, the constitutive models developed for saturated soils can be used for unsaturated materials once the effective stress equation has been defined. In this book, an analytical equation for the effective stress for unsaturated soils is established. This equation requires the knowledge of the superficial area of solids affected by the capillary phenomenon. In other words, we need to know how water distributes in the pores of the soil. This distribution can be modeled using a solid-porous model built on a regular network. However, the size of the network required to correctly simulate the structure of a small soil sample cannot be managed with a common PC. For that reason, a probabilistic porous-solid model is developed. This model uses the pore size distribution in the form of a probabilistic function which in addition to the Laplace equation and the principle of continuity can be expressed as the probability of a pore of certain size to be filled or dry at suction during a wetting or drying path, respectively. In this way, the soil-water retention curves can be simulated and the effective stress at any suction during wetting or drying processes can be determined. Based on this approach, it is shown that unsaturated soils behave under the same principles for strength and volumetric behavior as saturated soils. This revised edition brings additional information about an elastoplastic framework for expansive soils, hydro-mechanical coupling and a fully coupled model. The additional chapters also cover the experimental parameters used to derive the models. An updated set of references and a list of abbreviations is also included in this edition. Towards A Unified Soil Mechanics Theory paves the way for a universal theory of soil mechanics. The volume will be a valuable reference to civil engineers, earth scientists and hydrologists interested in soil mechanics at both academic and professional levels.