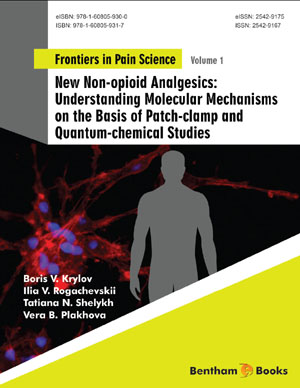 Discovery of NaV1.8 channels has opened a new perspective to study the mechanisms of nociception. A remarkable feature of these channels is their ability to be modulated by binding of various endogenous and exogenous agents to membrane receptors coupled to NaV1.8 channels. The behavior of their activation gating system was patch-clamp recorded and analyzed by the Almers’ limiting slope method. It was established that opioid-like membrane receptors could control the functioning of NaV1.8 channels. A novel role in this mechanism is played by Na+,K+-ATPase, which serves as the signal transducer instead of G proteins. Switching on the opioid-like receptors one can selectively decrease the effective charge of NaV1.8 channel activation gating device. As a result, only the high-frequency component of nociceptive membrane impulse firing is inhibited. This is the component that transfers nociceptive information to CNS.

The three units involved in the described membrane signaling cascade (opioid-like receptor → Na+,K+-ATPase → NaV1.8 channel) are potential targets for novel analgesics. Investigation of this mechanism of nociceptive signal modulation is of major importance not only for fundamental physiology but also for clinical medicine.

Derivatives of gamma-pyrone show their remarkable ability to trigger the novel mechanism of NaV1.8 channels modulation described in Chapter 1. Unlike morphine, which activates both opioid and opioid-like receptors, comenic acid specifically switches on the latter mechanism involving Na+,K+-ATPase as the signal transducer. It is extremely important that not any gamma-pyrone derivative can decrease the voltage sensitivity of NaV1.8 channels, though all molecules studied herein share a rather similar chemical structure. A very productive approach which makes it possible to elucidate the peculiarities of ligand-receptor binding on the molecular level is combined application of quantum-chemical calculations and the patch-clamp method. Below we present our findings that explain a totally unevident result of highly selective binding of gamma-pyrone derivatives to the opioid-like receptor. Understanding of this mechanism opens up opportunities for creation of a novel class of analgesics.

The nociceptive system codes noxious signals by increasing its impulse firing. NaV1.8 channels play a central role in the process of primary sensory coding. The Almers’ method is almost ideal for the study of behavior of their gating device. Application of this method makes it possible to elucidate the mechanism of receptorcoupled modulation of NaV1.8 channels by opioid-like receptors, which exhibit high affinity to some gamma-pyrone and gamma-pyridone derivatives. A remarkable feature characterizing these substances is their ability to chelate calcium. That is why opioidlike receptors recognize these attacking molecules in physiologically appropriate conditions by activation of a very important additional mechanism of ion-ionic interactions switched on by attacking molecules with chelated calcium. This conclusion is confirmed by the study of the effects of gamma-pyridone derivatives, which are structurally very close to gamma-pyrones and, in addition, also have an ability to chelate calcium.

The results discussed in this and the previous chapters open a new approach to solve the problem of recognition of medicinal analgesic substances. Our quantum-chemical calculations demonstrate that calcium chelation process plays an important role in ligand-receptor binding and it is energetically allowed not only in vacuum but also in the adequate physiological environment. Conclusions concerning the probable structure of opioid-like receptor binding pocket are presented.

Cardiotonic steroids are a recently discovered class of hormones synthesized in the adrenal cortex and hypothalamus and circulating in the blood. It is well known that the target molecule for these agents is Na+,K+-ATPase. A direct consequence of the proposed mechanism of NaV1.8 channels modulation in Chapter 1 is the prediction of a special signaling function of the sodium pump. In other words, Na+,K+-ATPase should be involved in the processing of nociceptive information. The data presented in the current chapter support this idea. According to our findings, ouabain as a newly recognized hormone plays the role of endogenous analgesic at subnanomolar concentrations. Its target site is located directly on Na+,K+-ATPase and it recognizes ouabain, only in the form of its calcium chelate complex. The most significant result discussed in this chapter is explanation of the dual effect of ouabain: two distinct attacking molecules (ouabain and its calcium chelate complex) bind to two distinct sites of Na+,K+-ATPase, thus modulating two distinct functions of the enzyme: pumping and non-pumping (signal-transducing). Another newly recognized hormone, marinobufagenin, also exhibits analgesic effect at low concentrations but it is of principally different nature. This molecule lacks the ability to form marinobufagenin‒ Са2+ chelate complex in 1:1 stoichiometry which could activate the signal-transducing function of Na+,K+-ATPase upon binding to the enzyme. The decrease of Zeff of NaV1.8 channel activation gating device induced by application of marinobufagenin at nanomolar concentrations results from activation of the “modulated receptor” mechanism, i.e., this molecule binds directly to the aminoacid sequence of the channel without involvement of Ca2+.

Molecular mechanisms of the nociceptive information control in primary sensory neuron are described based on our investigation of the membrane signaling cascade (opioid-like receptor → Na+,K+-ATPase → NaV1.8 channel). Summarizing the data presented in this volume it is possible to conclude that modulation of NaV1.8 channels responsible for the coding of noxious signals can be carried out due to two novel targeting mechanisms. The first of these is the activation of opioid-like receptors; the second is the activation of the Na+,K+-ATPase signal-transducing function. Development of a novel class of analgesics that trigger these mechanisms should lead in the near future to successful solution of the problem of chronic pain relief.

The monograph is a summary of methods used to study pain receptors and the results obtained in some experiments designed to study the effect of non-opioid analgesics. The molecular mechanisms of nociceptive information control in primary sensory nociceptive neurons are described based on investigations of the membrane signaling cascade (opioid-like receptor → Na+,K+-ATPase → NaV1.8 channel) observed by the authors. Based on this data, the authors conclude that the modulation of NaV1.8 channels responsible for the coding of noxious signals can be carried out due to two novel targeting mechanisms. The first of these is the activation of opioid-like receptors; the second is the activation of Na+/K+-ATPase as a signal transducer. The development of a novel class of analgesics that trigger these mechanisms should lead to a successful solution to the problem of chronic pain relief. Chapters of the monograph cover the general methods used in studying nociceptive pain (including the patch-clamp method), and the mechanism behind the binding of different ligands to these receptors such gamma-pyrones, gamma-pyridines and cardiotonic steroids. This monograph is a valuable reference for neuroscientists, pharmacologists and allied researchers studying pain receptors for the development of safe and effective analgesics.