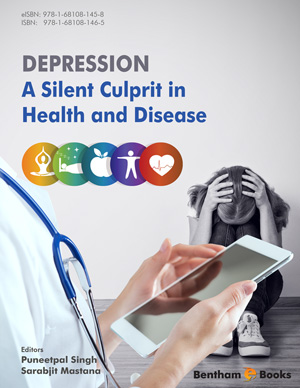 It is well documented in the literature that there is high prevalence of depression in various diseases and is also a risk factor for the development of certain diseases, such as cardiovascular disease or diabetes. Depression can delay the convalescence and may have effects on treatment states. Pharmacological treatments for depression are based on increasing activity of neurotransmitters which are normally diminished in this disease. Various intrinsic or extrinsic factors play role for the development of depression. Treatments vary according to the type of depression. Hence, diagnosing the exact cause of depression is very important. The adverse effects of antidepressant drugs on other disease conditions in a depressed patient should be considered, particularly on the central nervous system and the cardiovascular system. The interactions of various antidepressants may cause the "Serotonin Syndrome" by synergy effect. There are also interactions with other drugs at the kinetic level due to the role of cytochrome P450 (CYP450) in the metabolism of antidepressants and many others (drugs or molecules). These interactions can be competitive or non-competitive with a result of agonism (synergies) or antagonism, with the change of relative effects of each one. Because antidepresant effect is at long term, the quick substitution of one antidepressant with other usually gives mixed effects of both and interactions at the beginning. Withdrawal should be gradual otherwise, it may cause discontinuation syndrome. The symptoms of this syndrome should not be confused with the patient's symptoms. The worsening of other ailments and enlargement of convalescence can be diminished with right type of antidepressant treatment.

P300 Wave in Depression: An Update

Event related potentials (ERP) are generated in response to a distinct episode such as when a sensory stimulus is present or there is cognitive reaction for such a stimulus. The electrical potentials generated from such motor, sensory or cognitive events are called electroencephalographic (EEG) fluctuation. Electrically, these are the reflection of the combined activity of postsynaptic potentials generated by huge number (measuring thousands or millions in number) of cortical pyramidal neurons which are oriented in a similar manner and are firing in synchrony. Among all the event related potentials, the best studied has been that of the positive wave arising at around 300 ms, popularly known as the P300. The P300 is the positive wave appearing at about 300 ms after presentation of stimulus. This ERP component was first explained by Sutton et al. and is extensively examined in relation to neurophysiological evaluation of cognitive functions. They described this waveform in terms of amplitude, polarity and latency. Many studies have reported that depressed individuals have distinctive cognitive impairment. The impact of these findings was such that the cognitive impairment of decreased ability to concentrate has become one of the nine core DSM-IV diagnostic criteria for major depressive disorder as a characteristic feature of syndromal depression. Perhaps next to schizophrenia, depression has been the most studied psychiatric condition to be evaluated with P300. So far, more than 20 studies have analysed the P300 component in depressed individuals and have unanimously pointed that depression causes an attenuated P300 response for different stimulus types and sensory modalities-auditory tones, geometric shapes, alphanumeric characters, nonsense syllables and photographs. The use of P300 in depression has been mainly for two purposes- 1) Diagnostic and 2) Prognostic. In this review, we will elaborate these findings of P300 in depression and their applications.

The Impact of Aging on Post-Stroke Depression

Post-stroke depression (PSD) affects about one-third of the ischemic stroke survivors and it is one of the world’s most significant health problems. Vascular dysregulation is often met in late-life depression (LLD) and cerebral blood flow (CBF) reduction can influence regional brain functions, contributing to affective and cognitive symptoms. However, it is not clear if perfusion deficits can cause secondary degenerative changes in the brain or that ongoing degenerative changes of the aged brain will be simply aggravated by stroke. A brain injury is accompanied by an exaggerated neuroinflammation by activation of immune-reactive microglial population and is considered a trigger mechanism for depressive-like behavior after injury that may last for weeks or months after stroke and is precipitated by advanced age. Research using animal models and clinical studies of mood disorders highlighted that an increased level of proinflammatory molecules and increased levels of reactive oxygen species (ROS) along with alteration of 5-hydroxytryptamine system (5-HT) are associated with decreased neurogenesis. Treatment of PSD includes psychotherapy (CBT-cognitive behavioral therapy) and selective serotonin reuptake inhibitor (SSRI) and selective norepinephrine reuptake inhibitor (SNRI) drugs. More recently, transcranial magnetic stimulation (TMS) has been used to treat depressive patients. Its efficacy is however, questionable. More basic and clinical research is needed to uncover mechanisms underlying depressive behaviour in the elderly caused by perfusion deficits or brain lesioning.

Molecular Insights into Depression in the Genomic Era

Several psychiatric disorders including Schizophrenia, major depressive disorder (MDD), bipolar disorder, attention-deficit/hyperactivity disorder and autism spectrum disorder are all very common. WHO data suggest MDD as a leading cause of adult disability, however the complex nature of the disease etiology makes it least understood among its more studied disease counterparts. Although both genetic and environmental factors are known to contribute substantially to the etiology of MDD, several association studies both single gene and Genome Wide Association Studies (GWAS) are available describing the contribution of multiple genes. Severe lacunae exist in correlation among these association studies that prevent a clear definition in genetic causes that could be a result of small samples, epigenesis, heterozygosity in populations studied, presence of rare variations as well as lack of proper co-relation with environmental factors. With the advances in nucleic acid and amino acid sequencing techniques in this era of genomics and proteomics, the identification of novel disease markers is easier. More extensive study identifying rare variations in larger population along with a more systematic study including system pathways as well as genetic and protein interaction is recommended to obtain a clear picture of the underlying genetic causes of these complex disorders.

Based on diffusion tensor imaging (DTI) studies, brain white matter (WM) abnormalities have been recently suggested to play a critical role in the pathophysiology of major depressive disorder (MDD) and suicidal behavior. DTI studies reported the presence of altered WM integrity both in subjects with MDD and suicidal behavior. Microstructural WM abnormalities located in neural circuits critically involved in emotional processes and mood regulation may result in enhanced vulnerability to psychiatric morbidity contributing to functional impairments. However, the role and significance of WM alterations as well as their possible implications in patients with major affective disorders and suicidal behavior are still poorly understood. The present chapter aims to comprehensively review the current literature about the association between microstructural WM alterations as assessed by DTI techniques, MDD and suicide behavior.

Depression is considered as a complex problem with potentially serious economic consequences for affected individuals as well as public healthcare systems. There is much debate among laypersons, patients, academics and clinicians about the causes of depression, its clinical significance and the effect of conventional medical interventions such as antidepressants. This monograph showcases some aspects of depression through specific reviews on some of the intricacies behind its mechanism. The book includes five reviews on the subject, covering the significance of depression in patient well-being, an update on P300 wave findings and the link with clinical depression, the genomics behind depression, the effects of ageing on the onset of depression in stroke patients, and tensor imaging techniques used in studies on patients exhibiting suicidal behaviors as a result of major depressive disorder. This reference provides useful updates for healthcare workers, neuroscientists and behavioral scientists interested in basic research on depression and in planning to develop methods to study depression in either a clinical or laboratory setting