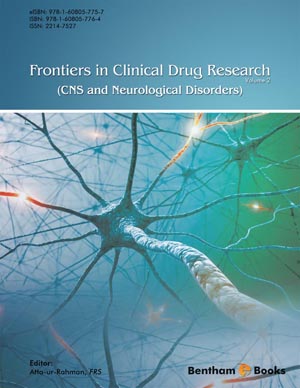 Schizophrenia is controllable by pharmacological and cognitive behavioral therapy, with a significant chance of beneficial positive outcomes. However, over the past two decades, new drugs for psychiatric disorders have been both few in number and based more on already established, rather than novel, mechanisms.

In this review we present the current pipeline of drugs for schizophrenia, from the earlier stages of development to phase III clinical trials and briefly outline the most promising strategies and targets currently under investigation for the development of novel schizophrenia drugs. Also, we discuss the three major bottlenecks in drug discovery for schizophrenia: lack of accurate animal models; lack of tools and tests in healthy/early stage of the disease volunteers that can provide early indication of efficacy; and strict reliance on RCT methodologies.

In addition, we highlight the importance of developing new paradigms for drug discovery in schizophrenia that take advantage of the recent advances in genome-wide association studies, imaging and optical manipulation of neural circuits and the use of induced pluripotent stem cells (IPSCs).

Alzheimer´s disease (AD) is known to be a neurodegenerative disease manifested as an inability to form new memories. Amyloid plaques and neurofibrillary tangles, formed by deposits of amyloid-β peptide (Aβ) and microtubule-binding protein tau respectively, represent the two neuropathological hallmarks of AD. These lesions mainly accumulate in brain regions known to modulate cognitive functions, such as the hippocampus, septum, amygdala or entorhinal cortex. Recent findings support the emerging concept that optimal network activity in relevant structures for learning and memory requires of finely regulated excitatory and inhibitory neurotransmission. Since these brain structures have dense reciprocal glutamatergic, cholinergic and GABAergic connections, their relationships directly affect learning and memory processes. They have been proposed, as highly susceptible regions to suffer damage by Aβ during AD courseamong other centers of the brain. In addition, increasing evidence have shown that early soluble forms of Aβ, rather than late fibrillar conformations, interfere with neuronal network function and produce an initial stage of synaptic dysfunction; which probably starts 20–30 years before the clinical onset of AD, that could be consistent with the early deficits observed in AD patients. Therefore, Aβ interactions on neurotransmission in memory-related brain systems are critical in cognitive functions and emerge as a pivotal target for drug design studies to improve learning processes and dysfunctions that manifest with age. In this sense, since treatments based on glutamatergic and cholinergic pharmacology in AD have shown limited success, therapies combining modulators of different neurotransmission systems seem to be a more useful tool for the treatment, and overall prevention, of this dementia. Hence, pharmacological strategies to recover the unbalance between excitatory and inhibitory neurotransmitter have to take into account the GABAergic system.

Plasma exchange (PLEX), which basically consists in the removal of the plasma out of the patient blood, is especially dedicated to target the humoral part of the inflammatory response based on the mechanistic knowledge of the disease physiopathology. In this chapter we will focus on the new indication of PLEX in the full spectrum of demyelinating disorders of central nervous system.

We will briefly review the spectrum of disorders (MS, NMO, ADEM, Balo) and demonstrate how the humoral part of inflammation, according to the underlying disease, is especially suitable to be eliminated by PLEX upstream the extravasation step. The strong link between pathology and treatment sensitivity will be clearly demonstrated with a special emphasis on NMO. We will describe the main technical aspects of PLEX and emphasize the kinetics of the targeted components since PLEX efficiency is strongly dependent on the clearance of the targeted components and the timing of the treatment in the dynamic of the inflammatory lesion. Safety concerns and risks will be developed.

We will assess all the relevant clinical results obtained in each disorder of the spectrum according to the type of the attacks (spinal, optical, brain), the specificity of each disorder and tricky clinical situations in this spectrum. Parameters influencing the outcome will be detailed with a specific emphasize of the strongly time-dependent effect of PLEX in NMO. Moreover we will try to delineate a long-term role of PLEX given for relapses. Finally we will give an overview of various experimental techniques in line with PLEX.

In conclusion, PLEX is safe and could be a major treatment in inflammatory disorders relapses, especially in NMO. Preliminary results suggest that PLEX may modify the short prognosis of some demyelinating relapses.

Neurochemistry and Neuropharmacology of Essential Tremor

The neurochemical mechanisms for essential tremor are unknown, as there is no good experimental model for this disease and only a few post-mortem studies have been reported. Alterations of the dopaminergic, serotonergic, GABAergic, noradrenergic and adrenergic systems have been described, and are the object of this revision. The most consistent data are related with the GABAergic, dopaminergic and adrenergic systems. The pharmacological treatments that have demonstrated greatest efficacy for essential tremor are the beta-blockers propranolol and primidone. The efficacy of other drugs, such as antiepileptic drugs, calcium antagonists, amantadine, clozapine, olanzapine, alprazolam, theophylline, etc., has not been clearly demonstrated. In some cases resistant to pharmacotherapy, infiltrations with botulinum toxin type A have been described as effective.

In the last 20 years, there have been advances in techniques and instrumentation for intracranial aneurysm exposure and obliteration [94]. However, it seems that 32% of the patients, who underwent surgery, suffer a fatal outcome or some form of sequelae [20]. Primary brain damage due to subarachnoid haemorrhage (SAH) and to a vasospasm, is the major cause of mortality and morbidity; but surgery-related complications constitute 14% of the morbidity [20]. Indeed, the surgical therapy of cerebral aneurysms carries several risks related to manipulation, accidental or intentional blood vessels clipping, or bleeding due to premature aneurysm rupture, suggesting room for improvement in surgical procedures.

Today, electrophysiological monitoring with somatosensory and motor evoked potential (SSEP and MEP) recording, and electroencephalographic (EEG) monitoring, are frequently used in aneurysm surgery, and they are the standard techniques used in level assessing of cerebroprotective anaesthesia and monitoring ischemia during surgical manoeuvres.

In this chapter, we report our experience in using neurophysiopathological monitoring during aneurysm surgery with particular reference at the evoked potential and EEG changes in response to surgical and anaesthetic variables; we also give technical advice and discuss clinical applications. However, to prove intraoperative usefulness, these techniques require a dedicated knowledge, both technical and pathophysiological. .

Multiple Sclerosis (MS) is the most common disabling neurological disease of young adults. Symptoms of MS are quite variable and include visual disturbances such as double vision, weakness in arms or legs, fatigue, difficulty with coordination, changes in sensations such as numbness and tingling, or difficulty with concentration or memory.

The Different Types of Multiple Sclerosis are:

At the onset MS can be classified clinically into RRMS or PPMS, with relapses and neurological symptoms persisting for days to weeks that then gradually dissipate. Later patients may accumulate deficits and most convert to a secondary progressive phase, characterised by deficits that increase in the absence of further relapses.

MS is a complex immune-mediated disorder of the central nervous system (CNS). Although a clear patho-mechanism underlying the disease has not yet been fully understood, pathologic hallmarks of MS lesions include inflammation, demyelination, gliosis, axonal degeneration, and neuronal loss.

Increasing knowledge about MS immunopathogenesis has given rise to a number of new potential therapeutic targets, which interact with the immunological system on several levels. A number of disease-modifying therapies for MS, including oral agents, are in advanced development (in Phase II and Phase III clinical trials) and likely to be available soon.

Several monoclonal antibodies are in development and have demonstrated promising efficacy in Phase II and Phase III studies. They can be classified according to their mode of action into compounds targeting i) cytolytic antibodies (Rituximab, Ocrelizumab, Ofatumumab, Alemtuzumab); ii) antibodies and recombinant protein targeting cytokines and chemokines and their receptors (Daclizumab, Ustekinumab, Atacicept).

Other agents with similar mechanism of action to that of oral drugs and monoclonal antibodies have been studied in Phase I and II trials.

The new drugs have shown to reduce relapse rates and decrease the burden of CNS lesion, as detected by Magnetic Resonance Imaging. However, the long-term risks of new drugs remain largely unknown. Trials assessing the combination of new and emerging MS therapies with known disease-modifying therapies used in clinical practice may provide data on their safety profile and establish their placement in relation to the existing treatments.

Finally, trials evaluating the efficacy of symptomatic therapies for MS have become an area of more intensive research.

L-Glutamate is one of the most common neurotransmitters in the brain. Since many neurodegenerative diseases have been shown to be associated with glutamate levels, studies on its signaling transduction has been limited to neuronal systems for decades. However, recent accumulating evidences suggest that glutamatergic signaling is widely involved in the maintenance and regulation of homeostasis of non-neuronal tissues. When dysregulated, glutamatergic signaling promotes uncontrolled growth of cancer cells as observed in melanoma, breast, prostate and colorectal cancers. In this review, we will discuss the implication of glutamatergic signaling through glutamate receptors and transporters in cancers in comparison to neuronal disorders as well as recent clinical approaches using Riluzole, an FDA approved glutamate release inhibitor for ALS patients in human cancers.

This chapter aims to evaluate treatment options for diabetic retinopathy (DR). Prior to discussing therapeutic approaches, we summarize the pathogenesis of DR as one of microvascular complications of diabetes and diseases in the retina. Current treatment options of DR include control of blood glucose and pressure, retinal photocoagulation, surgery, and intravitreal injection of steroid and anti-vascular endothelial growth factor agents. Although these have reduced the risk of blindness in patients with DR, each has its limitations. We list candidate drugs which aim at overcoming these limitations in clinical trials. Further studies are required to develop new drugs based on consideration of the pathophysiology of DR and the structure of the retina.

- Frontiers in Clinical Drug Research - CNS and Neurological Disorders is an ebook series that brings updated reviews to readers interested in advances in the development of pharmaceutical agents for the treatment of central nervous system (CNS) and other nerve disorders. The scope of the ebook series covers a range of topics including the medicinal chemistry, pharmacology, molecular biology and biochemistry of contemporary molecular targets involved in neurological and CNS disorders. Reviews presented in the series are mainly focused on clinical and therapeutic aspects of novel drugs intended for these targets. Frontiers in Clinical Drug Research - CNS and Neurological Disorders is a valuable resource for pharmaceutical scientists and postgraduate students seeking updated and critical information for developing clinical trials and devising research plans in the field of neurology. The second volume of this series features 8 chapters that cover a variety of topics including: -treatment of multiple sclerosis and schizophrenia -neurochemistry of tremors -relationship between GABA and Alzheimer’s disease therapy -relationship between neurological diseases and cancer -research on angiogenesis-related blindness