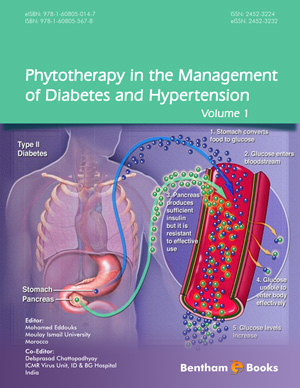 Diabetes and Hypertension: A Cause and Effect Synergy?

Diabetes is a disease that affects millions of people worldwide and is characterized by elevated levels of glucose in the blood due to its overproduction mainly by liver, and underutilization by insulin requiring organs such as liver, adipose and muscle tissues. There is, however, glucose over utilization in tissues not dependent on insulin for glucose transport like kidney, nerve and brain. Due to the excess tissue glucose there are serious complications and its reversal is important for a good metabolic control and normalization of body. Diabetes adversely affects the arteries, predisposing them to atherosclerosis, which in turn cause high blood pressure and other cardiovascular problems. If not treated, it can lead to blood vessel damage, stroke, heart failure, heart attack, or kidney failure. Diabetes comes in a variety of types with the most common being type 1 and type 2. Type 1 is an auto-immune disease resulting from an insulin deficiency; while type 2 is characterized by an insulin resistance resulting from genetic factors, poor diet, excess weight and inactivity. Compared to people with normal blood pressure, hypertensive people have an increased risk of coronary artery disease, strokes, peripheral vascular disease (hardening of the arteries in the legs and feet) and heart failure. This paper will discuss the biochemical events of these metabolic disorders and the relationship between diabetes and hypertension to understand how the intervention process for its management can be initiated in personal level.

Diabetes is a major public health problem that is approaching epidemic proportions globally. Worldwide the prevalence of chronic, non-communicable diseases is increasing at an alarming rate. Cardiovascular diseases (CVDs) are the major causes of mortality in persons with diabetes, and many factors, including hypertension, contribute to this high prevalence of CVD. Hypertension is approximately twice as frequent in patients with diabetes compared with patients without the disease. Conversely, recent data suggest that hypertensive persons are more predisposed to the development of diabetes than are normotensive persons. Co-existence of diabetes mellitus and hypertension increases the risk of macro- and micro-vascular complications. In this review attempt has been made to explore the risk factors which can be helpful to prevent hyperglycemia and related manifestation of Type 2 diabetes. Both biochemical and genetic diagnostic markers identified till now have been catalogued to describe the status of pathogenesis in hyperglycemic subjects.

The Role of Phytotherapy in the Management of Diabetes Mellitus

Diabetes mellitus remains the most common endocrine disorder of carbohydrate metabolism, often associated with attendant complications with high morbidity and mortality. Despite the successes recorded with the use of conventional chemotherapy in the disease management, phytotherapy appears to have good prospects in the effective management of the disease course and prognosis. In this review we will examine the etiopathological basis (including the recent advancements in its pathology), diagnosis and monitoring of diabetes mellitus. The chapter provides information on the current conventional pharmacotherapy and supportive care as well as an in-depth and incisive analysis on the emerging trend in the use of herbal products. The evidencebased herbal pharmacotherapy that is currently employed in the management of the disease is discussed. In the concluding part of the chapter, the future prospects of the diverse anti-diabetic herbal remedies are also discussed.

The increasing worldwide incidence of diabetes mellitus in adults constitutes a global public health burden. It is predicted that by 2030, India, China and the United States will have the largest number of people with diabetes. By definition, diabetes mellitus is categorized as a metabolic disease characterized by hyperglycemia resulting from defects in insulin secretion, insulin action, or both. The vast majority of cases of diabetes fall into two broad etiopathogenetic categories. The first category, type 1 diabetes, the cause is an absolute deficiency of insulin secretion. While the second type is much more prevalent category, called as type 2 diabetes, the cause is a combination of resistance to insulin action and an inadequate compensatory insulin-secretory response. Despite the great interest in the development of new drugs to prevent the burden of complications associated with this disease and the raised interest in the scientific community to evaluate either raw or isolated natural products in experimental studies, few of them were tested in humans. This chapter is a contribution to the understanding of ethnopharmacology of plants having hypoglycemic activity and its contribution to the elaboration of new treatment of diabetes mellitus.

Phytotherapy of Hypertension in Morocco

There is an increasing interest in the health and wellness benefits of herbs and botanicals. The reason behind this interest is the fact that herbs and botanicals might offer a natural safeguard against the development of certain pathological conditions and are used in several cultures as a putative treatment for some diseases. One such area may be the lowering of blood pressure activity. Ethnopharmacological surveys in Morocco demonstrated the use of 21 plant species belonging to different families in the treatment of ailments related to high blood pressure. Our bibliographic review establishes the fact that most plants used in the traditional treatment of hypertension effectively reduce blood pressure when used with different extraction procedures and protocols. In most cases, the hypotensive effect is accompanied by a diuretic activity or a vasorelaxant effect. This study confirms the richness of our traditional medicine and supports the use of plants in the treatment of hypertension in Morocco.

Over the last decade, there has been a renewing interest in natural products research. The exceptional developments in the areas of separation science, spectroscopic techniques associated with microplate-based ultrasensitive in vitro assays provide a novel and interesting drug design from natural products. The various available chromatographic techniques have made possible the preisolation analyses of crude extracts or fractions from different natural sources. This chapter presents a general overview of the processes involved in natural product research, starting from extraction to determination of the structures of purified products.

Phytotherapy in the Management of Diabetes and Hypertension is a good addition to existing volumes detailing knowledge of hyperglycemia therapy. This e-book emphasizes the basic biochemistry behind diabetes mellitus and hypertension, along with the control or remediation of these conditions through a cost effective, safe, easy-going, easy-adaptable method validated by scientific research. This e-book contains 7 chapters dealing with various aspects of these diseases and their Phytotherapy treatment and life style management. Phytotherapy can give patients long term benefits with less or no side effects. Hence, this e-book is an authentic alternative or complementary therapeutic compendium to physicians and patients. This book will also be useful to students, teachers, researchers, clinicians and general readers interested in learning about applied phytotherapy.