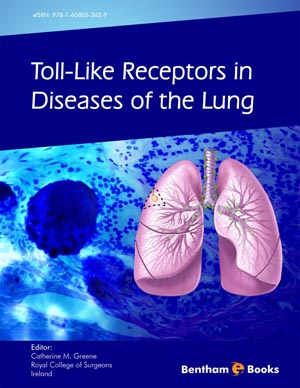 Toll-like receptors (TLRs) comprise a major family of pattern-recognition receptors (PRRs) that fulfill a key role in recognizing, discriminating and responding appropriately to microbial infection. Although expressed principally by macrophages and dendritic cells, TLRs expression is widespread and includes, but is not limited to cells of myeloid and lymphoid origin. Activation of TLRs by their cognate ligands can lead to induction of proinflammatory cytokine and antimicrobial peptide expression or up regulation of type 1 interferons. Whilst central to innate immunity, TLRs can additionally communicate with the adaptive immune response via modulation of cell-adhesion and co-stimulatory molecules to induce longer term immunity. Interestingly a selection of non-microbial endogenous factors can also activate certain TLRs, with dysregulation of these events having potentially deleterious consequences. Since the first report of human TLR4 by Medzhitov and Janeway in 1997 [1] there has been huge progress in elucidating the fundamental processes controlling the biology of the TLR family.

TLRs in the Lung in Health and Disease

Toll-like receptors (TLRs) have been shown to play a pivotal role in both innate and acquired immune responses. TLRs recognize various pathogen-associated molecular patterns (PAMPs) such as bacterial lipopolysaccharide (LPS), viral RNA, CpG-containing DNA, and flagellin, among others. Their activation and signaling lead to the induction of inflammatory cytokines and type I interferons for host defense. In addition, the responses of the innate immune system are important not only in the elimination of pathogens but also in the development of antigen-specific acquired immunity mediated by B and T cells. TLRs are also involved in non-infectious diseases such as lung injury, COPD, fibrosis, allergy, autoimmunity, and cancer. Here we describe some features of the regulation of TLRs in a variety of lung diseases.

Role of Toll-Like Receptors in Asthma

Asthma is a chronic inflammatory airway disease characterized by episodes of reversible airway narrowing, bronchial hyperresponsiveness and chronic pulmonary inflammation. The prevalence of asthma has been increasing since the 1980s with more than 150 million people affected worldwide. Developed and westernized countries have higher asthma prevalence. To date, asthma is the most common chronic disease in children. More than 50% of asthma cases are the atopic/allergic form triggered by environmental allergens. In the last decade, much attention has been focused on the role of toll-like receptors (TLRs) in the pathogenesis of allergic asthma where it has been suggested that TLRs form the link between the innate and the adaptive immune responses. Toll-like receptors exhibit an important role in the activation of cells of the innate immune system, such as monocytes, macrophages, dendritic cells, mast cells and neutrophils. This chapter will discuss the current knowledge on the different TLRs and their possible roles in allergic asthma.

TLRs and the Airway Epithelium in the Cystic Fibrosis Lung

Cystic fibrosis (CF) is an autosomal recessive disorder caused by mutations in the gene, encoding the cystic fibrosis transmembrane conductance regulator (CFTR) protein. These mutations disrupt CFTR function within epithelial cells. Although the defect affects ion transport in many organs, the major cause of morbidity and mortality in individuals with CF is the progressive lung disease characterized by inflammation and unremitting bacterial infection with Pseudomonas, Staphylococcus, Haemophilus, Aspergillus and Burkholderia species. Although CF airways exhibit high numbers of immune cells and elevated levels of proinflammatory cytokines, the lung’s innate immune defenses fail to clear bacterial infections. These observations suggest a modified immune response in the CF lung (due to the CFTR mutation and associated secondary alterations of the airway epithelium). Airway epithelial cells not only function as a physical barrier against inhaled pathogens, but also play an important role in innate immune responses of the host. Microorganisms are recognized through a variety of pattern recognition receptors (PRR), mainly Toll-like receptors (TLRs) that are abundantly expressed in airway epithelial cells. TLR activation in a milieu potentially rich in microbial (and endogenous) TLR agonists probably adds to the chronic inflammatory phenotype in CF airway epithelia. Therefore, the expression, function and activation of TLRs in CF airway epithelia have become the focus of intensive research. In this chapter, we give an overview of the current understanding of TLR signaling in CF and its potential role in the pathogenesis of CF lung disease.

Chronic obstructive pulmonary diseases (COPD) are chronic inflammatory diseases in which exacerbations can be associated with viral or bacterial infections. The innate immune system is the first line of defense against cigarette smoke, pollutants, occupational exposures, pathogens and tissue injury and is responsible for resolving infections and repairing damaged tissues. Initiation of the innate immune response is triggered by recognition of pathogen- or danger-associated molecular patterns (PAMPs and DAMPs) by pathogen recognition receptors (PRRs). The most studied PRRs are the Tolllike receptors (TLRs) which are localized either to the cell surface or within endosomes. Activation of TLRs induces the recruitment of innate immune cells, initiates tissue repair processes, and results in adaptive immune activation; importantly these processes are abnormal in COPD. Understanding the roles of TLRs in the pathogenesis of chronic inflammatory pulmonary disease, may provide novel targets for the prevention and/or treatment of COPD.

Mycobacterium tuberculosis expresses molecular motifs that are potent TLR agonists, targeting especially TLR2, and resulting in rapid activation of cells of the innate immune system. The control of experimental acute M. tuberculosis infection seems rather independent of the presence of TLRs, as is the induction of adaptive immunity to mycobacteria, while long term control of chronic infection might be more TLR dependent. Conversely, some molecules produced by M. tuberculosis can modulate the host innate TLR mediated responses. Control of M. tuberculosis infection depends on a balance between the host recognition of the pathogen and activation of both innate and adaptive immune responses, and immune evasion strategies developed by the bacteria.

Bacterial Infections and Pneumonia: What is the Role of Toll-Like Receptors?

Bacterial pneumonia is an important disease and the most frequent cause of death due to an infection worldwide. Host defense against inhaled pathogens is essential in preventing microbes from gaining access to the lower respiratory tract where they might cause tissue damage. The innate immune system provides the first line of defense and hence is involved in the recognition of invading pathogens. In order to detect microbial motifs, innate immune cells express a panel of so-called pattern recognition receptors. The most important recognition receptors are Toll-like receptors (TLRs) of which 10 have been identified in humans. Each TLR can identify a specific set of microbial motifs, which then leads to the activation of innate immune cells and the release of proinflammatory mediators. The distinct role of selected TLRs during bacterial pneumonia has been extensively studied in animal models. While host defense against Streptococcus pneumoniae depends on the simultaneous involvement of TLR2, TLR4 and TLR9, the immune response during most Gram-negative pneumonias requires the presence of TLR4. Although these data disclosed important information they also revealed a high redundancy in the requirements for TLRs in vivo. Genetic association studies in humans in turn confirmed the redundancy since only deficiencies in common downstream signaling molecules were found associated with increased susceptibility to bacterial pneumonia. Immunotherapeutic possibilities that could target TLRs directly are therefore limited, and currently confined to TLRs’ role as adjuvants and activators of adaptive immune responses in vaccine development.

TLRs and Viral Infection in the Lung

In response to viral infection and array of innate an adaptive immune cells, in conjunction with the airway epithelium, orchestrate and inflammatory response to eliminate the invading virus. Pattern recognition receptors and Toll-like receptors (TLRs) in particular have an important role in these events. Here we describe the expression and function of TLRs by infiltrating and resident cells within the airways and describe their roles in responding to infection of the upper and lower respiratory tract with respiratory syncytial virus, rhinoviruses, adenoviruses and influenza virus. We discuss factors affecting host susceptibility to infection and resolution of pulmonary viral infection and describe how TLRs and their signaling pathways represent promising targets for prophylactic and therapeutic interventions in this context.

Toll-Like Receptor Recognition of Fungal Pathogens in the Lung

The incidence of pulmonary complications involving fungal infections has increased over the last decade and is a common cause of morbidity and mortality. Candida species are one of the yeast most frequently identified in clinical samples, whilst Aspergillus is the most commonly found filamentous fungus. The major risk factor for fungal infection is host immunosuppression includes individuals undergoing solid organ transplant and those with HIV infection. This chapter aims to provide an overview of the epidemiology and clinical features of fungal lung infection, the expression, function and activation of relevant TLRs within the airways and a discussion of currently used and new antifungal agents and strategies.

The Role of Toll-Like Receptors in Lung Transplantation

Lung transplantation is now a mainstream therapy for end-stage lung disease. However, long-term survival remains diminished by antigen-independent ischemia-reperfusion injury and antigendependent acute and chronic rejection. While rejection has traditionally been considered an adaptive immune response, the innate immune response, and events mediated by Toll-like receptors in particular, have recently been shown to be important to the priming and modulation of this adaptive immune response. Unlike other solid organ transplants, the lung is in constant communication with the outside environment and innate immunity likely plays a more significant role in lung transplantation. In this chapter, we will review Toll-like receptor responses in the context of lung transplantation.

This e-book is a review on current understanding of the role of toll-like receptors (TLRs) in the lung in health and disease. Topics covered include 1) the expression, function and activation of TLRs during bacterial, viral and fungal infection of the airways, 2) the role of TLRs in the pathogenesis of genetic and environmental pulmonary disorders, and 3) TLR biology in lung transplantation. Each chapter highlights recent advances in a selected domain in lung disease research. This e-book serves as a comprehensive resource for both scientists and clinicians studying innate immune mechanisms in the lung and provides a single reference comprising both basic and specialized information.