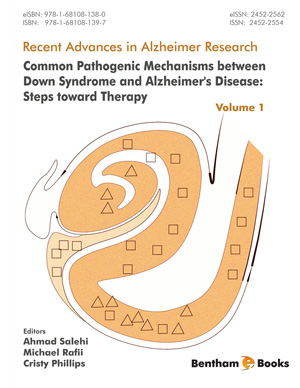 Behavioral and psychological symptoms of Alzheimer’s disease and other dementias may create a considerable burden of care in the general population, yet relatively little research has been carried out in this area. Although problem behaviors may be relatively less frequent in people with Down syndrome who develop Alzheimer’s dementia, nevertheless they cause additional caregiver burden. Both pharmacological and non-pharmacological interventions are used for the management of problem behaviors in people with intellectual disability in general. Similarly, both pharmacological and non-pharmacological interventions are used to manage symptoms of dementia including behavioral symptoms in the general population. Treatment approaches used in both these groups could equally be used to manage problem behaviors in people with Down syndrome who develop dementia. Extrapolated evidence from studies on children with autism spectrum disorder and intellectual disability possibly supports use of risperidone for management of problem behavior in adults with Down syndrome and dementia. RCT-based evidence exists to support use of antipsychotics, mood stabilizers, and cholinesterase inhibitors for the management of behavioral and psychological symptoms of dementia in the general population but no specific evidence for Down syndrome exists. Clinicians have to be mindful of potential serious central nervous system adverse effects of antipsychotics in people with dementia. Similarly, evidence for efficacy of non-pharmacological interventions for problem behaviors both in the general population with dementia and people with intellectual disability in general is too equivocal to make any definitive recommendation at this stage for people with Down syndrome and dementia. Recently there has been an emphasis on providing person-centered service specifically designed for people with dementia. Another important aspect of management is training and support for caregivers and care staff to help people with dementia to live a better quality of life and reduce behavioral and psychological problems.