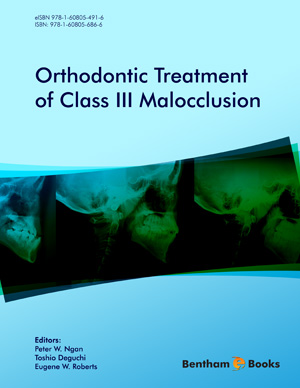 Class III treatment can be divided into two categories: Orthopedic treatment for developing Class III malocclusions in growing patients and camouflage/surgical treatment for non-growing Class III patients. Recently, several articles have described on the use of temporary anchorage devices (TADs) for protracting the maxilla in developing Class III patients [1, 2]. The application of TADs can maximize the skeletal response of maxillary protraction and minimize the side effects such as dentoalveolar protrusion. TADs can be placed in the inter-proximal alveolar bone, with attachment to a tooth-born protraction device, or can be used directly in the form of a mini-plate for maxillary protraction. In adult patients, Class III malocclusion either is camouflaged by orthodontic tooth movement or is treated in combination with orthognathic surgery. The use of TADs has narrowed the gap between the two types of treatment modalities because it has expanded the range of orthodontic camouflage treatment. In camouflage treatment, a Class III relationship is usually corrected via differential tooth movement of the upper and lower dentition with premolar extraction. In non-extraction treatment, the anterior movement of the upper dentition and/or posterior movement of the lower dentition can be used to correct the Class III relationship. In this chapter, the authors will focus on the anchorage consideration in treatment of Class III malocclusion with extraction of the lower premolars and nonextraction with distalization of the lower dentition. In addition, an adult cleft palate case is presented in which maxillary expansion was reinforced by the use of TADs. The application of TADs for decompensation in Class III surgery cases is also discussed.