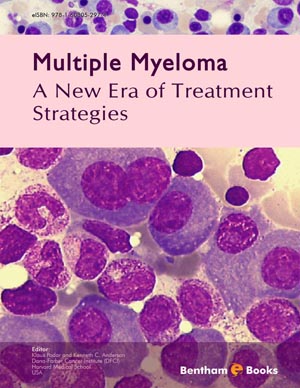 The development of multiple myeloma (MM) is a complex multi-step process involving both early and late genetic changes in the tumor cell as well as selective supportive conditions by the bone marrow (BM) microenvironment. Based predominantly on our understanding of the functional importance of the MM BM microenvironment and its interrelation with the MM cell, which triggers tumor cell homing, seeding, proliferation, and survival, a multitude of new molecular targets have been identified. The clinical approval of four derived agents, thalidomide, its immunomodulatory derivative Len, the proteasome inhibitor bortezomib and pegylated liposomal doxorubicin have fundamentally changed treatment regimens in MM during the last decade. Moreover, based on a pathophysiologic rationale a multitude of additional agents, most prominently carfilzomib, pomalidomide, vorinostat, and perifosine have demonstrated promising preclinical and early/ advanced clinical activity indicating the evolvement of further treatment advancements in near future.