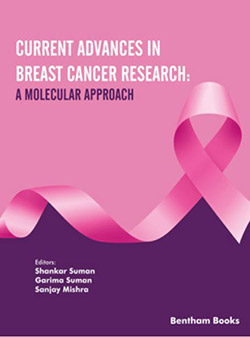 Cancer cells devise different mechanisms to undergo aberrant cell division. Dysregulated signaling pathways and metabolic reprogramming are the two key mechanisms leading to cancer development. The role of metabolic dysregulation has been well known in cell proliferation, metastasis, and resistance to therapy, eventually leading to tumor progression. The dysregulation of enzyme activity and biochemical pathways have emerged as major factors in the metabolic reprogramming of breast cancer. The abnormal changes in the level of metabolites are mechanistically associated with the metabolism of cancer. Quantitative research studies have provided a list of metabolic biomarkers, which have a promising role in the early detection of breast cancer as well as in its therapy. Many of the current research studies are directed towards understanding the intricacies of metabolism in cancer cell proliferation. This chapter gives an overview of breast cancer metabolism with updated information and describes how deregulated metabolism plays a key role in the oncogenic cascade leading to the neoplastic transformation of cells.